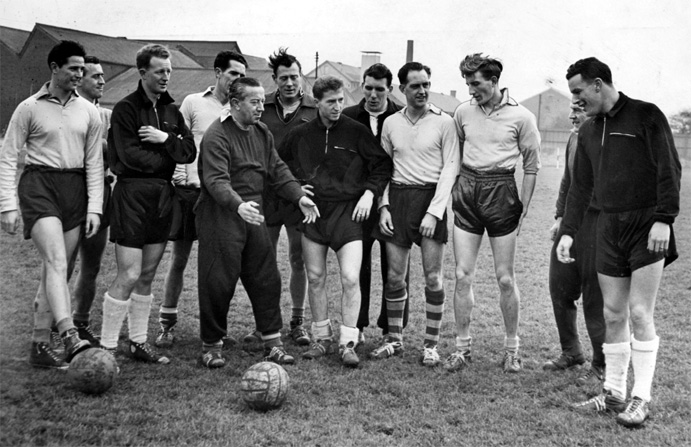 Manchester United had two managers that amassed over half a century of first team management between them. Everybody with an ounce of football knowledge will know the names of Sir Matt Busby and Sir Alex Ferguson. Both managers were knighted and have been honoured by United with roads and stands being named after them. They have both also been honoured with statues at Old Trafford and fully deserved, after all the glory they brought to the club. However, United have another man who has done so much for the club, his tenure spanning 44 years, his name is Jimmy Murphy.

James Patrick Murphy was born in South Wales in 1910 and died in Manchester in 1989. Out of the 79 years of his life, 44 of those we’re associated with Manchester United in one capacity or another. Murphy played professional football for West Brom from 1928 until 1939, amassing 204 appearances for the Baggies. Also during this time he won 15 caps for Wales between 1933 and 1938. He switched to Swindon in 1939 and only played 4 games, before the outbreak of the Second World War curtailed, not only the football world but everyday life for the entire nation.

Murphy, just like most able bodied men, was drafted into the forces during the war years. It was in this period that Murphy met Matt Busby, who was also enlisted at the same time. Busby heard Murphy giving a speech to a band of troops about football in this period and was highly impressed with what he heard. So when the war ended in 1945 and football got back up and running in 1946, Busby enlisted Murphy to help him in his new job. That job was manager of Manchester United Football Club.

So in 1946, Jimmy Murphy became the first signing of the Matt Busby era. His position was that of Chief Coach but that position meant he had to undertake other duties as well. Not only was he coaching the first team, he also undertook the role of reserve team manager. Murphy was also tasked with the scouting and training of young footballers. He didn’t just restrict his scouting network to the Manchester area, he wanted the best players in the country. Between Murphy and Busby, they set up a vast scouting network which would encompass the whole of Britain and Ireland.

In essence, Jimmy Murphy found potential players, trained and coached these potential players, then played them in his reserve team until Busby was satisfied they were ready for first team action. The Busby Babe production line was born and Murphy was the driving force behind it all. The man in the background who hated the limelight, was the most vital cog in the Manchester United machine. Without his knowledge, expertise and astute football brain, there would never have been any Busby Babes.

The Busby Babes wasn’t just a romantic notion dreamt up by Busby. Whilst it was a brilliant concept to fill your first team with young players who had come through the United system, it was also essential. Manchester United were stoney broke in 1946. They didn’t even have a ground to play in, as the Germans had bombed Old Trafford in the early years of the war. United were still waiting for their money from the War Commission to pay for the rebuilding of their ground. This task wasn’t completed until 1949 and United had to be extremely grateful to the noisy neighbours for providing sanctuary during this period. For 3 full seasons City and United ground shared at Maine Road. In fact straight after the war United didn’t even have any kit and again City gave United their old kits and track suits for training. Hence, old school City fans referring to United as “Rags” but beggars can’t be choosers.

With the dire situation United found themselves in, it was vital that the blueprint that Busby set out was successful. Jimmy Murphy not only implemented this but ensured its success also. United started to see the fruition of the plan when they won the FA Cup in 1948. This was then followed by a title success in the 1951-52 season. United went into the decade in good shape, Murphy was delivering the players for Busby and the club was going from strength to strength.

As the club got bigger Murphy was appointed assistant manager in 1955 and relinquished his chief coach role at that point. However, he still remained as reserve team manager and a full time scout. It’s incredible that with the pressures of first team duties that he was also able to execute the extra duties. During this period, the young players who Murphy scouted and trained won the FA Youth Cup in five consecutive seasons in 1953, 54, 55, 56 and 57. Testament to the man and his eye for spotting exceptional young talent. His first season as assistant manager to Busby was rewarded with the title in 1955-56 and they followed it up also in the 1956-57 season.

As if life at United wasn’t hectic enough for Jimmy Murphy with Busby now defying the Football League and taking United into European competition. He took on an extra role outside of the club, he became manager of the country of his birth. Murphy would manage Wales from 1956 through until 1964. Two years into the Wales job, Murphy led Wales to their only World Cup Finals in history. However, the night they clinched their place in the 1958 finals, was the prelude to the worst and most catastrophic period in history of Manchester United.

February 5th 1958, Wales under the guidance of Murphy beat Israel 2-0 to clinch their place in the World Cup Finals scheduled for Sweden that summer. The same night United drew 3-3 with Red Star Belgrade in the away leg of the European Cup Quarter Final, thus clinching their place in the semi finals. Obviously Murphy was unable to travel to Belgrade with Busby and the team of Babes due to the Welsh match. When Jimmy Murphy went to bed that evening, he must have felt euphoric, his country and his beloved club creating history. Any sweet dreams he had that night soon turned into real life nightmares the following day.

February 6th 1958, the darkest day in history for Manchester United. After stopping in Munich to refuel the plane, tragedy awaited at the end of the icy runway. Two aborted take offs led to a third and fatal attempt, as the plane crashed and burned. A whole team wiped out, 8 players died, others injured so badly it ended their careers, only a few were able to perform again. Twenty three people perished on that Munich runway and Busby himself was barely clinging to life.

As the news filtered back through to Manchester, the horror of it all hit home. United could have folded as a club but Murphy wouldn’t allow it. He had lost colleagues, personal friends and young men who he had found when they were just boys and nurtured them into Europes finest footballers of that generation. The heartache and trauma that man must have been feeling was somehow locked away deep inside him and he got on with the task of ensuring Manchester United Football Club had a future. There would have been no Phoenix rising from the Ashes of Munich without Jimmy Murphy.

Over the next few weeks, Murphy not only attended funerals and met with bereaved families, he also scraped together a football team for a fixture just 13 days after the tragedy. He begged and borrowed players but credence to the football world, plenty of clubs offered to help him out. So in February 1958, Jimmy Murphy became the caretaker manager for the first team and promptly won his first game 3-0. It was the 5th round of the FA Cup against Sheffield Wednesday and famously, the United team in the programme for that night was left
blank.

With the best players now deceased, not much was expected of United that season. Murphy somehow steered United to the final of the FA Cup but were beaten by a much more experienced Bolton team. They also won the first leg of the European Cup semi final against AC Milan at Old Trafford but were soundly beaten in the second leg in the San Siro. As the season progressed, so did the health of Matt Busby, who was still being treated in a Munich hospital. Busby was well enough to pick up the reins of management again the following season and Murphy was able to resume all his other duties. His Welsh team reached the quarter finals of the World Cup that summer, only getting beat 1-0 by eventual winners Brazil. The goal scored by a 17 year old Pele.

For those 6 months in 1958, the man who hated the limelight, was well and truly thrust into the spotlight. The eyes of the football were all looking at Jimmy Murphy.

United now had to rebuild and Busby and Murphy repeated the process of finding young players and creating a new team of Babes. They won the FA Cup in 1963, the FA Youth Cup again in 1964 and it was the same year that Murphy now relinquished his position as reserve team manager. United were now back winning titles again, clinching the Championship in 1964-65 and 1966-67. Then finally in 1968, United became the first English team to win the European Cup.

In a highly emotional night at Wembley, they defeated Benfica by 4 goals to 1. Busby had finally achieved his golden dream 10 years after being denied by the Munich tragedy. At his side was his assistant Murphy, both must have reflected how it could have easily not happened. Busby was lucky to be alive and Murphy was lucky that somehow he was able to save United. With that success, the golden era of Busby and Murphy came to an end. Busby retired after the following season but Murphy stayed on to assist Wilf McGuiness his predecessor.

Murphy remained assistant manager until 1971, then had a year out before coming back as a full time scout for Tommy Docherty in 1973 until 1977. In fact it was Murphy who scouted Steve Coppell and Gordon Hill, the two wingers who epitomised the exciting 4-4-2 football of the Doc era. He carried on his scouting duties in a part time capacity right through from 1977 until his death in 1989. I think it was fitting that he was part of the club when Alex Ferguson started out on his journey to become the most successful manager in British football history.

Jimmy Murphy is entrenched in United history, he is just a big a part as all our legends. He never ever wanted to be at the forefront, he just wanted to do his work in the background. He never wanted to be a manager, despite high profile approaches from the likes of Brazil, Juventus and Arsenal.

So when the names of Busby, Ferguson, Charlton, Law, Best, Cantona, Keane, Giggs, Ronaldo, The Busby Babes, The Class of 92 and Rooney are mentioned. Remember none of them would be United legends without the dedication, football brain and tenacity of Jimmy Murphy. If ever a man deserved to be in the spotlight its him.

One response to “Jimmy Murphy – From The Background Into The Spotlight”