Just about every question running through my mind in the wake of United’s defeat in the Manchester Derby can be answered with those three words. Was I expecting United to win? Did I think they matched up well against Pep Guardiola’s much deeper squad? Was it realistic to think the Spaniard wouldn’t continue to have his way with the Portuguese in head-to-head matches? Would starting Marcus Rashford make United invincible? Did the non-call on Claudio Bravo cost the home side a much deserved point? Did Mark Clattenburg get the call right? Am I infuriated at the result? Depressed by it? Suicidal? Meh, not so much.

Don’t misunderstand. I don’t think there’s a wide gulf between the two squads’ quality. United could have won this match, although they shouldn’t have. City is better at the moment. They have a better manager, too. That’s the way it is. If you listened to José Mourinho discussing Sergio Aguero’s enforced absence from the match, you could sense the United manager knew these facts of life, as well.

[Guardiola] could decide to play with Iheanacho or Sterling. He could decide to play with Silva as a fake number nine between the lines. It is clear that they have many options. That for us, in the preparation of the game, makes us have to go step-by-step with every situation because we are trying to reduce the unpredictability of the game. To try to do this now is more difficult.

Translation: I have no clue what Pep will do. The answer turned out to be Mourinho’s first guess. Iheanacho led the line for City. The Nigerian was on hand to clean up for Kevin de Bruyne to give City a two-goal lead towards a dominant first half’s end, the Belgian having already put the visitors on top on the quarter-hour.

Yet, the Special One’s dubious choices for a starting XI had more to do with the Citizen’s early good fortune. Jesse Lingard hadn’t started, or even featured, since the Community Shield. His match fitness had to be in question. Henrikh Mkhitaryan hadn’t started at all, although he had been regularly used as a substitute. Where did this sudden confidence in the Armenian originate? What of the understanding developed between Zlatan Ibrahimović, Wayne Rooney, and Juan Mata in attack? Even though Anthony Martial had played well for France during the international break, it wasn’t too surprising to see Rashford supplant him. He had shown he could fit in with the other three. Lingard and Mkhitaryan? Not so much. Couldn’t they have established themselves in a match that wasn’t the most difficult in the fixture list to date? And was this the best time for Mourinho to remind us he is a Louis van Gaal prodigy? However much he may claim their approaches differ, apparently they both induce selection headaches in supporters.

After the match, Mourinho was asked if he had chosen the wrong eleven. He almost launched into an even more nasal rendition of Cher’s “If I Could Turn Back Time” than the original.

It’s disturbing Mourinho came so close, so soon, to the finger-pointing he tortured Stamford Bridge fans with in the first half of last season. In the end, he accepted responsibility, but suggesting the players “did not give me what I wanted” is not the same as admitting you put them in a position to fail rather than succeed. Going forward, that is a concern. On the other hand, he had every reason to feel let down by the most expensive player he left on the pitch. From wherever Yaya Touré took in the match, likely a bakery specializing in birthday cake, he had to be thinking there was little difference between his play and that of Paul Pogba on the day. And he’d be right, just not in a good way. City’s midfield was just too quick for the young Frenchman to come to grips with on either side of the ball.

Mourinho also took issue with Mark Clattenburg’s restraint in full view of Claudio Bravo’s lack thereof. A keeper is given first dibs on the ball, even for a fifty-fifty chance he has just coughed up with a horrendously heavy touch to avoid an attacker. Regardless, a keeper has as little business coming into any challenge with his studs raised than an outfield player. Both a penalty and a booking were warranted in the situation.

Assuming Rooney or Ibra converted from the spot, the match’s tenor would have changed. That doesn’t mean United would have come away with a point, however. If you count all the what-might-have-beens, Rashford’s faux-equalizer when Zlatan was clearly offside, influencing Claudio Bravo’s play, De Bruyne hitting the post, then watching it slither across the goal mouth rather than in, and the two near-post saves David de Gea was forced into making late on, everything evens out. City are still one to the good. It is what it is.

Encouragement came with City’s first half domination turned upside down in the second half. They enjoyed several opportunities on the counter, but found themselves on the back foot too often, I’m sure, for Guardiola’s liking. Clinging desperately to a lead is not his style. United’s second-half pressure increased when Luke Shaw came off for Martial, as United adopted a 3-5-2. The formation has consistently stymied Guardiola-coached sides, whether employed by Antonio Conte’s Juventus or Diego Simeone’s Atletico Madrid. It was also a thorn in the Spanish national team’s side in both the most recent World Cup and Euro competitions. An interesting question is whether Mourinho will consider it for the rematch in February? Regardless, there’s no reason to believe United can’t take an even share of the Manchester Derby spoils provided their manager doesn’t try to be too cute again, and simply trusts in his best players.

All in all, 1-2 against the noisy neighbors wasn’t the best result. Nor the worst. And the match was far more entertaining than a supporter of a José Mourinho side facing a major rival has any right to expect. The only question left unanswered from the match was whether Guardiola’s players really understand all the gesticulating and leaping about their manager performs in the coach’s box. Ian Anderson may be available for consultation if, as I suspect, the answer is not so much. 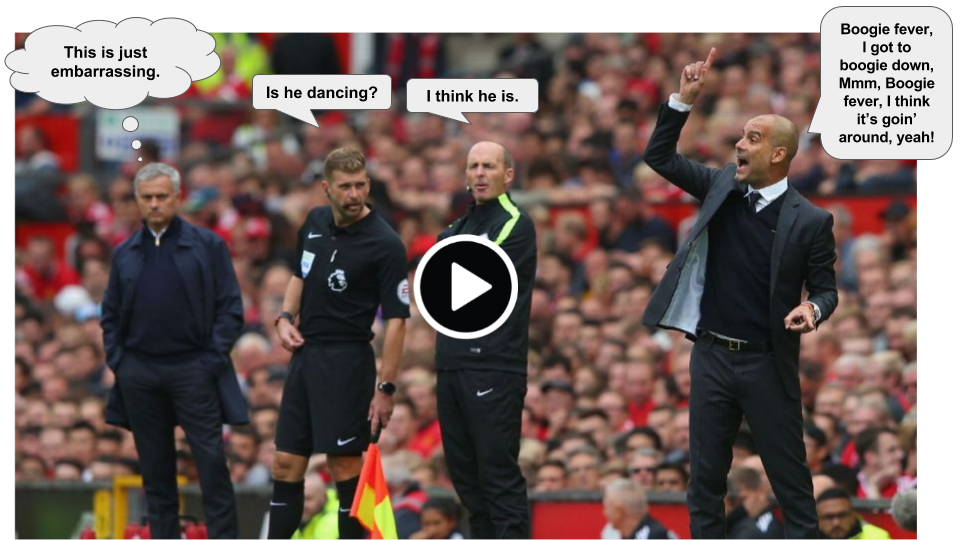