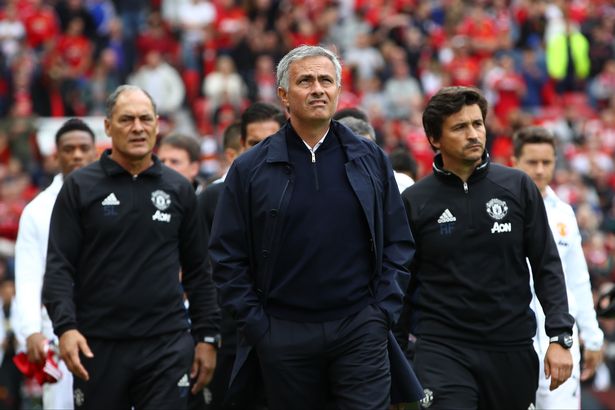 United’s derby day defeat starkly exposed the size of the job Mourinho has on his hands.

It was indeed a result that the performance deserved. For both teams. As far as United were concerned this was rather typical of United’s derby performances for the last several years, particularly in Ferguson’s later years. Sluggish and riddled with stage fright, United effectively conceded the first half to their neighbours and never got going until the task was already beyond them. City were good but not great but they didn’t have to be, they were organised and did the simple things well in contrast to United’s disjointed, inconsistent and lethargic display.

Of course United were not completely terrible by any means. The second half saw a welcome step up in pace – though still not good enough to merit a positive result – and far more penetration from United going forward as opposed to the return of Louis Van Gaal’s Total (shite) Football in the first half.

This welcome change was largely thanks to a combination of Marcus Rashford’s introduction and the comedic high farce of Claudio Bravo, who resembled Peter Sellers playing the role of a terrible goalkeeper. The clamour for Rashford to start more often is only now going to increase but more on that later.

In many ways this match exposed the sizeable task Mourinho has to overcome to make his shot at his dream job successful. United had been fine in the first three games but never looked like champions. Hull was a warning, despite The Tigers’ surprisingly decent start United made far harder work of that match than it should have been. Rashford’s winner was welcome but the harsh truth is a championship winning side would have a troubled club with 13 fit senior players and managed by Mike Phelan dead and buried long before full time.

Ferguson left a wreck of squad behind with its best players at the end of their careers to a man incapable of managing Manchester United. The successor to the successor, was a dour Dutchman disliked by many seemed to have no long term aims beyond scraping fourth every year, otherwise known as “The Wenger Strategy.” After three years of poor to zero planning and dour football it is unreasonable for even the best manager and stellar signings to turn a squad of inconsistent, one-paced plodders into world beaters overnight.

Speaking of one-paced plodders, it appears Mourinho has joined the increasingly small, private members club of people who bafflingly indulge Wayne Rooney. Rooney wasn’t the only sub-par performer Saturday lunchtime but he’s the only one who has been sub-par for over four years. Sloppy in possession, no threat going forward and struggling to keep pace, Rooney can add poor leadership to his increasing negatives, as Rooney chastised teammates despite his own multiple errors and committed three definite bookable offences.

It is bad enough Rooney is afforded the privileges and indulgences of a ten time Ballon D’or winner and 50 goal a season player but worse that he handles such treatment with the emotional intelligence of a petulant child.

Previously this season, United’s captain *sarcastic laugh* had been able to salvage a dire display with one moment of quality. Against Manchester City, he was unable to even conjure that. Regular readers of my columns will likely be sick of me talking about Rooney but the simple truth is being handsomely rewarded and given special treatment despite consistently being unable to do his job.

At this point it is hard to understand how he merits a spot ahead of young Marcus Rashford. The teenager displays all the tactical intelligence, pace, technical ability and even temperament his skipper lacks. The more United’s starlet continues to impress, the harder it will be to keep him out of the starting lineup. Mourinho is right to manage the youngster carefully to preserve his physical development but when they’re ready, they’re ready!

The result itself was largely decided in a rather bizarre team selection by Mourinho however. Something he took responsibility for and rightly so. Consider he was not considered ready, it seems a strange time to throw in Henrikh Mhkitaryan and he struggled to get into the game. As for Jesse Lingard, despite much favouritism due to his status as a “local lad” it is hard to shake off the feeling that he isn’t very good.

As for Fellaini, well despite improvement, he is a very limited and cumbersome player. When up against a bunch of slight, fast passing, perpetual motion machines, an ungainly human-giraffe hybrid was always going to struggle. As a result of deploying a limited two man midfield, Pogba always was unable to find his rhythm. Mourinho needs to seriously consider changing his system to a three-man midfield to draw the best out of the most expensive player of all time.

Nevertheless, despite the negatives, it is early days in the Mourinho era at Old Trafford. There is great scope for improvement and great improvement there will be. It’s a big job but Mourinho needs more than four league games to overcome the roadblocks ahead.