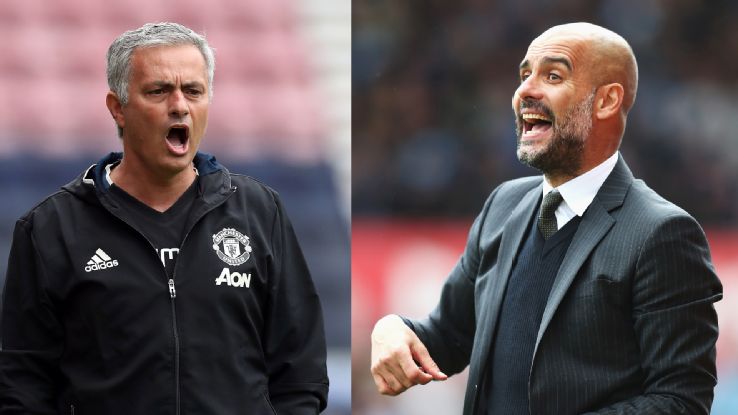 The best of enemies?

Will past encounters over-shadow this coming Derby? By Philip Morrissey

It is the rivalry to end all. A city divided. For at least 90 minutes, families, friends and colleagues will be split down the m

iddle. You can be a red or a blue. Purple does not exist here at all. It will decide leadership of the league, ownership of the city and become the early favourites for the championship. Both managers will set out their plans to win, or at least not to lose, at all costs. Never before has there been such a feeling of hatred between the two. Or has there?

No doubt those in the upper echelons at Sky unleashed a wave of profanities upon hearing of the scheduling of this particular game. It makes their sell as being a pivotal six-pointer harder to achieve when both sides have only three games each under their belts. It is true that a game against the neighbours is a big one for the fans no matter what time of the season it is. It is a massive game when further into the season and both teams have found some of their form.

Instead, much of the selling point has circulated around the past relationships between Mouriniho and Ibrahimović to Pep Guardiola. Past comments made whilst both men were on opposing benches or their respective footballing principles. The former was portrayed as being the artist and flamboyant master of the game who delighted in free flowing football and bringing through younger players. The latter was seen to be the ultimate pragmatist. Style was fine as long as you could get results. If a club was in crisis and demanding silverware, he would be your man. Just provide him a deep enough wallet and don’t expect him to stay around for very long. Wins for Barcelona were generally perceived to be a victory for the game itself, whereas victories with Real Madrid or Inter Milan were seen to be the result of negativity. The fact that Pep supposedly got the Barca job ahead of Jose, was also believed to be a cause of their strive.

There was a similarly frosty relationship when Zlatan was a player under him. He had arrived in a deal from Internazionale which had seen club legend, Samuel Eto’o, depart in the opposite direction. He was at the top of his form and joining the reigning Champions League winners. It seemed to be a perfect mix. And the start to the reason, which had seen him score in his first five league games, suggested that. The team was flying high in all competitions and he was centre of it all. However, in the second half of the campaign, things seemed to change. Injuries and suspensions, caused him to be benched for key games. He could still produce the goods as shown by a two goal burst at The Emirates. The Swede felt increasingly side-lined and ignored in favour of other players. Despite being the top scorer and a league winner, he was flying back to Milan at the start of the next season. He later claimed that the pair had not spoken since February.

The cameras are expecting an all-out war when the teams come together. Events got somewhat feisty during some of the latter ‘El-Classicos’. Much attention will be paid as to whether hand-shakes and a post-match glass of wine will be offered and accepted. Since day one, Mouriniho has stated that he cannot allow the campaign to revolve around the new blues boss. By focusing on one team only, his side will get distracted from their main goal of triumph at the end. And he is correct. We have accused those from the Etihad of being small-time and obsessed with us. They will pose enough of a risk to the 100 per cent streak as it is. As much as we have been impressive in our wins, so have they. They are rightly going to be a major challenge but one of many.

The suspension of Aguero and lack of fitness of Kompany is expected to weaken our opponents. They have enough of options and players waiting to make their mark for this to be an excuse. It is more than a normal game for many but let us keep it in perspective. But it would be great to beat them nonetheless. Come on!