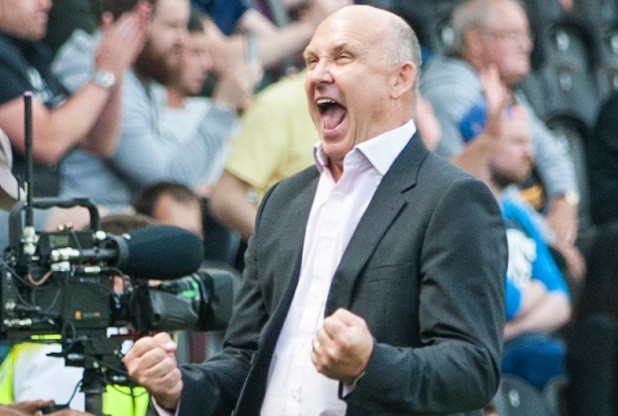 After the dust had settled on the Community Shield, United fans would have been forgiven for look at week three’s fixture and licking their lips in anticipation of a tasty buffet of goals. Hull were a disaster before a ball was even kicked. On the field they were down to thirteen fit senior players, pre-season was chaotic and players had not been brought into a team that only scraped into the Premier League via the playoffs.

Off-the-field there was a form of civil war. The owner Assem Allam, held Hull City fans in withering contempt, even saying his critics could die for he cared, his son, now running the club as his father is deathly ill, doesn’t even want the club. Unsurprisingly, the fans responded with hatred for them both and tired of being caught in the middle of a turf war over the club and being limited to bringing in Shaun Maloney, the manager Steve Bruce resigned.

Luckily his replacement was Mike Phelan, The Ancelotti of Pendle, has galvanized the small, downcast squad and forged an incredible bond with the fans very quickly. What once looked an easy win a couple of weeks ago, now looks like it will be a right, ruddy scrap.

Phelan, was a well-loved figure during his time at United but never respected. At times he seemed a figure of fan. A quisling, balloon popping, yes men to Ferguson’s all-encompassing presence and force of will. However, it looks as if, like some scheming Machiavellian student, Phelan was merely brilliantly observing behind a mask of comedic passivity.

It is incredibly impressive in how such a short space of time Phelan has managed to organise the players into a well-drilled and superbly organised outfits who defied the doubters – which was everyone – to topple the defending champions on the opening day. They followed that up by heading to South Wales to topple relative Premier League stalwarts, Swansea at the weekend. A group of no-hopers, have proven to us, once again that football is unbridled chaos.

Expect Hull to be tough opposition. Phelan will have his players even more hyped up than usual for the visit of his old club and despite being low on quantity, Hull do contain genuine quality and tough, experienced leaders. Men such as Curtis Davies, Tom Huddlestone Jake Livermore and the underrated Robert Snodgrass. Battle hardened, proud campaigners sprinkled with the quality of Abel Hernandez leading the line.

Nevertheless, as tough a nut to crack as Hull will be, United have nothing to fear. Confidence is high around United at the moment and the first time in several years, the quality is there to meet fan’s expectations. The new leading man, Zlatan looks like a man 5 years’ younger who has been playing in England for 10 years. Last Friday against Southampton he was imperious and has shown a willingness to engage in the physical side of things too. The blossoming bromance between him and record signing, the new-old guy Paul Pogba is delightful to boot.

Pogba will likely be starting again at the KC Stadium and as well he should. After a dicey opening ten minutes last Friday night Pogba settled in it looked as if he’d never been away. More surprising were his fitness levels. Far from being unfit after the close-season, Pogba played the entire game against Southampton and looked as if he could have managed an extra hour on top with ease! Once again, in the world of footballing chaos, my previous predictions are rendered null and void almost immediately.

There is a Mourinho look already to this team. Ruthlessly efficient and well organised with spells of flair and invention such as the midway point in the second half where United began to carve Southampton apart. Most encouraging is that its very clear Mourinho hasn’t figured out his best team yet, especially with the stellar performances of the misfit brigade of Blind, Fellaini and Valencia who has morphed into a hybrid of Cafu and perpetual motion machine. In the long-run I still believe Mourinho wants to deploy a 4-3-3 to get the best out of his start signing Pogba but for now, Mourinho will look for points on the board, while still figuring everything out.

United will get more cohesive and thrilling as the season goes on and that process will continue this weekend, although in Humberside this Saturday evening, they’ll have to fight for it first. Time to take the highway to Hull!