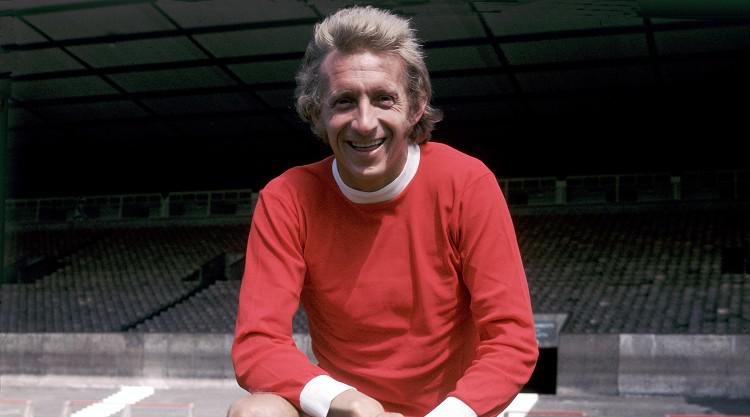 When Zlatan Ibrahomovic signed for Manchester United this summer, he prompted a reaction from Eric Cantona. Eric welcomed Zlatan but warned him that he would always be known as the King of Old Trafford. Zlatan responded by saying Eric may be the King but Zlatan would be the God. All good humour and it sent social media into a feeding frenzy. However, little was made of the fact that Old Trafford had another King and he was the original, his name is Denis Law.

Denis Law, born in Aberdeen and a very proud Scotsman, strode into Old Trafford in 1962 and began building his iconic reputation immediately. Sir Matt Busby had tried to sign him in 1956 after he had made his debut for his first club Huddersfield Town, who were managed by a certain Bill Shankly. He offered £10,000 for the 16-year-old, which was a phenomenal amount of money for a kid at the time. Not just a 16-year-old kid but a weak puny bespectacled kid with a twitch, many believed he would never make it in football. In fact when Shankly became manager of Liverpool of 1959, he tried to take Law with him but just couldn’t afford the fee.

Law did leave Huddersfield and signed for Man City in 1960 for a British record transfer fee of £55,000. Once again Busby tried to obtain his services but the money wasn’t available. He only played one season at City before they doubled their money by selling him to Torino for £110,000. This was a record between English and Italian clubs also. His time in Turin was a troubled one and in 1962, Busby finally got his man. He paid £115,000 for him, again a British record at the time.

It only took “The Lawman” seven minutes into his debut to score the first of his 237 goals for United. That first goal laid the path for his legendary status and his coronation as the King of Old Trafford. In that first season he scored 29 goals in 44 appearances and his goals helped United avoid relegation by just 3 points, eventually finishing 19th. However, United did win the FA Cup at the end of that 62-63 season. They went into the game against Leicester City as underdogs but won 3-1 and the King notched for United to win his first honour in the Red shirt.

The following season United challenged for the title, eventually finishing runners up to Liverpool. United may have finished up the season empty handed but Law set a record that still stands to this day. He scored 46 goals in 42 appearances that season, quite an incredible return in any era of football. He also won the Balon D’Or in 1964, so not such a bad season on a personal level for The King.

In the 1964-65 season, Law collected the first of his League title medals, he would collect his second and final one in the 1966-67 season. When you consider that in 11 years at United, Law only won 3 major honours, so why the heroic worship from the fans. It’s a lot more than just honours that made him iconic and earned him the title of the King.

He engaged the crowd whenever he scored, sharing the enjoyment of scoring with the fans. This endeared him to the thousands who packed into Old Trafford every week. Also the way he held his shirt cuffs was different to any other player at the time. This simple act could be argued as being equally iconic to Eric Cantona playing with his collar up. He was an ultra exciting player in the penalty area. He had lighting quick reflexes and maybe his light frame allowed him to be more acrobatic than most players. Also for a player who was only 5′ 9″, he was excellent in the air. He had that ability to hang in the air and his timing of headers was impeccable.

All those were attributes that set him apart but his goals cemented his legacy. Still to this day his 237 goals in 404 appearances is the best ratio of any United player in history. He has recently been surpassed by Wayne Rooney as the second highest scorer in United history but sits proudly and safely in third.

His biggest disappointment was missing the semi-final and final of the European Cup in 1968 due to injury. Busby’s finest hour and the King had to sit it out. However, in true Busby and United style, it did allow one of his homegrown babes to take Laws place. The Collyhurst Kid, namely Brian Kidd, did the King and his manager proud by scoring a European Cup Final goal on his 19th birthday. United always win something with kids.

The King did threaten to leave Old Trafford in the mid sixties demanding a new contract and a pay rise. He was flatly refused by Busby, who made him sign a new contract with the same wages in front of the press. It was rumoured that this was done to send a message to all the other players that no pay rises were in the offing. The rumour goes further to say that Law did receive a pay rise in private. Who would have thought it, a wily old Scottish manager using one of his star players to send a message to the press, players, board or whoever he wanted to make a point to. Football bloody hell.

When Busby left after his European triumph, United went into decline as did many of the star players who had brought them glory in the sixties. Law was struggling with injury and the merry go round of managers and players was the beginning of the end of the Kings Old Trafford reign. He went back to Man. City in the summer of 1973 but unbeknown at the time, still had a big part to play in fate of United.

Saturday 27th April 1974, Old Trafford. United need to beat City and hope other results go their way in order to avoid relegation. Sometimes the football Gods write cruel scripts and the King was to play a major part in this one. With no score and around 10 minutes left to play, the King of Old Trafford wearing the sky blue shirt of City scored. All that instinct that United had worshiped came back to haunt them, when Law back heeled no more than a half chance into the United net. Mortified at what he had done, he never celebrated, he just walked off the Old Trafford pitch more like a pauper than a King. He walked straight down the tunnel, never to play a first class competitive game again in his career.

The Red Army invaded the pitch and the referee was forced to abandon the game. As it turned out the other results went against United, so relegation was sealed without the Kings goal. In hindsight it did United a favour, Tommy Doc put together a vibrant new young team and they stormed back up into the top division the very next season.

Denis Law is part of the United trilogy along with Best and Charlton. They will all be remembered forever and their statue worshipped by future Reds of all generations. This will allow the King to live forever, long live the King.