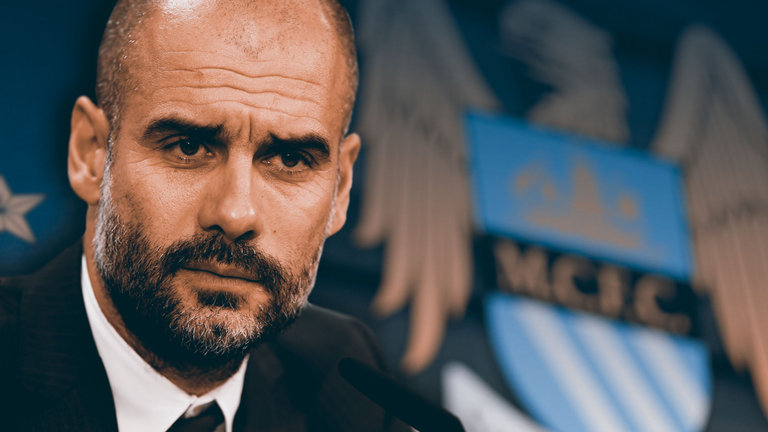 Ahead of what looks set to be the most competitive season in Premier League history, we caught up with Manchester Evening News reporter Rob Pollard to discuss Manchester City.

All eyes are on Pep Guardiola. Modelling Stone Island clobber, cheering up local kids with surprise taxi greetings and arriving at City the same summer as Jose Mourinho gets the United job. It is fair to say Manchester is where it’s at.

But can Guardiola’s time at Bayern Munich be described as a failure? The Catalan born manager was appointed to deliver the Champions League, and, despite winning three Bundesliga titles, you will bizarrely find many critical of his achievements.

Aged 45, no-one knows how long Guardiola plans to be at City. Thinking anything other than ‘the sooner he fucks off, the better’ would be daft unless you’re a closet Blue.

Very, very impressed. He speaks brilliantly, so from a professional perspective it’s great because he’s giving me plenty to write about, but he also appears to have re-energised the entire squad.I spoke to Clichy, De Bruyne and Zabaleta in Gothenburg and they were so keen to praise the impact he’s had and I know some of my colleagues had similar conversations with other players in China.

There’s no doubt the players had stagnated and become bored of Pellegrini’s ideas. Guardiola has come in and completely altered the landscape. He’s an intense student of the game and City needed his drive and passion.

Are you happy with the business conducted by City this summer, or are you still lacking in any department?

They’ve done some very good business. Gundogan at £20 million could prove a bargain. Stones is far from the finished article but it’ll be exciting watching him develop.

I still think they could have done with full-backs but you can’t make too many changes in one summer, I suppose.

What would you consider a successful season for City?

I think City need to be competitive in the league again because their last two campaigns have been very poor given the squad at their disposal. They also need to maintain the Champions League progress they made last season. A trophy is essential.

The pre-season fixture (United vs. City) in Beijing was cancelled due to shit playing conditions. Which club is in better shape going into the new season?

It’s difficult to say – but I do feel United have had an excellent window. A proven winner in the dugout, some arrogance on the pitch in the shape of Ibrahimovic and more power and pace across the pitch – it’s been a well-executed summer and Woodward deserves credit.

Who are you most concerned about this season: United, Chelsea, Arsenal, Liverpool, Spurs or Leicester?

At this stage I’d say Chelsea and United but until all the squads are finalised, you never can tell.

Do you think the way City dealt with Pellegrini’s sacking was right?

He knew from day one the club wanted Guardiola. Ferran Soriano has always been clear with him on that. Soriano feels three or four-year cycles are right for a manager. He believes things can become stale and players can get bored if it’s any longer. The days of a Fergie style reign are probably over.

So I think the club were completely open with him – and it was his decision to go public about Guardiola coming in.