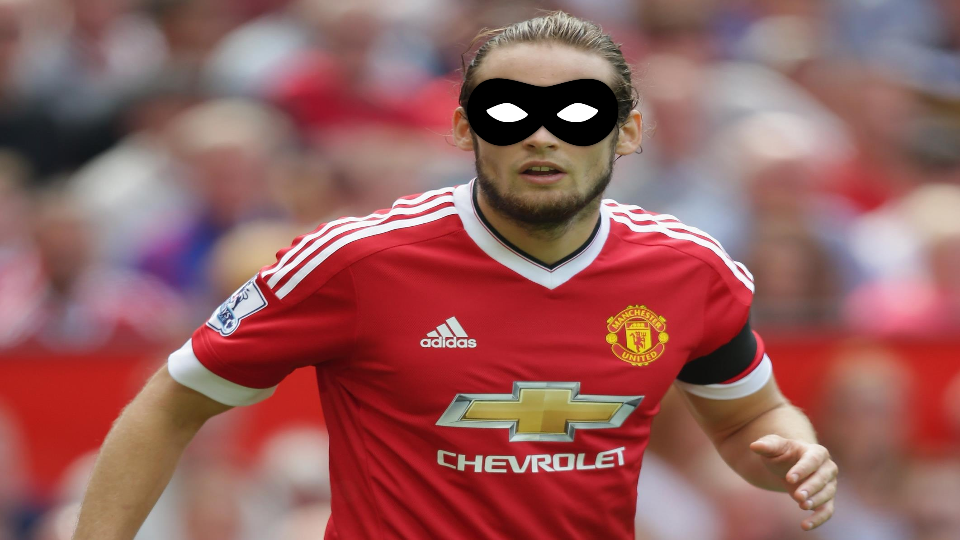 “Leading off the news in Lancashire this evening, Greater Manchester Police are asking the public’s assistance in stopping a vigilante. Stuart Flinders has the story.”

“Thanks, Roger. I’m coming to you from one of the practice pitches at Manchester United’s sprawling AON Training Facility.

[in the background, footballers in red and white can be seeing going through drills on an open swath of green dotted with orange cones, as coaches watch]

“It may seem a strange place to report a case of vigilantism, but there’s good reason to be here.

“Over the past few days, a series of small crimes have been thwarted in the Greater Manchester area. The hold up of a newsstand in Rochdale, a purse-snatching in Salford, a cabbie robbed in Bolton, and a bully stealing lunch money outside a school in Stockport. In each case, the thief was halted as he attempted to escape by a masked man who appeared from nowhere, dressed in a full Manchester United kit with the number seventeen embroidered on the back of the shirt and on the left leg of the shorts. As well, the name “Blind” was emblazoned across the shoulders. Witnesses say the hero had wavy brown hair, stood approximately one hundred and eighty centimeters, and weighed nearly seventy kilos. All accounts agree that he appeared suddenly, in the way of the offenders, knocking them off their feet with a deft shoulder tackle before disappearing as abruptly as he arrived.”

[footage shifts to a street scene where an excited, middle-aged woman gesturing into the middle distance is being interviewed]

“The bastard just snatched me purse, ‘e did,  and ran across and down the road there. Just as ‘e came to the corner, though, this young man in red and white football gear was suddenly standing in ‘is way. I could swear ‘e wasn’t there the instant before, but ‘e leaned a bit and the bastard just bundled over. I blinked, and the young man was standing next to me, handing back me purse. Then ‘e was gone.”

[footage shifts again to the entrance to the Stockport Grammar School, where an eight-year-old girl, tears still in her eyes, talks to the reporter]

“It was [name bleeped over for legal reasons]. He’s in year six and he’s big, ugly and fat. He’s always stealing our money, but this footballer–he had a mask like Robin from the Teen Titans–he knocked him over today, and told him to stop.”

[now an older man in a driver’s cap, standing next to a black hack, absentmindedly buffing a fender with his kerchief]

“Couldn’t believe it! This bloke just leaps out the back at the light. While I’m trying to suss out what to do ‘e runs into this fella in a United kit. ‘Ad rubber-soles on ‘is boots, tho’, rather than spikes. Looked just like Blind, too. The same sharp jaw line and cheek bones. I should know. Been followin’ the lads since I was a little blighter meself. Smiled and winked at me ‘e did, while the other fella was ‘oldin’ ‘is cracked ‘ead. Then, ‘e just wasn’t there.

[the camera returns to Stuart Flinders at the AON training ground, flanked by two policemen]

“Sorry to interrupt, but technically the Constable just does the driving. He isn’t my partner.”

[The Detective Sergeant rolls his eyes in a manner suggesting this distinction has fallen on deaf ears in the past. Stuart Flinders attempts to get the interview back on track]

“Detective-Sergeant Wilcox, is there anything you can tell us at this time?”

“Yes, the description of the vigilante matches the Dutch Manchester United defender Daley Blind in appearance–”

“–height, weight, and dress. We’ve asked the club to produce him for an interview–”

“–but the club has claimed to be uncertain of his immediate whereabouts.”

[the Detective Sergeant pauses, anticipating another interruption, but the Constable merely nods his agreement, so Wilcox continues]

“To be clear, we’re not accusing Mr Blind of anything at this time. He does match the description of our suspect, but it’s a very average description that could apply to nearly half the men in Manchester, my driver included. And anyone can get United gear online–”

[the Detective Sergeant glares at the Constable, pointedly clearing his throat. Unfortunately, his driver only has eyes for the camera]

“As I was saying, Mr Blind is merely a person of interest in the investigation. Although, we do concede it is interesting that the vigilante’s appearance coincides with the club’s recent return from pre-season friendlies in China and Sweden., we are just treating that as a coincidence. To be honest, we would very much like to eliminate Mr Blind as a suspect, so we can get on to the business of finding the real culprit.

“And mark my words, this person is a culprit. He is not a hero. Taking the law into your own hands is very dangerous. It could result in injury, and even fatality, not just to oneself, but to innocents. It is the job of the police to fight crime, and we are professionals. If you are listening, sir, I would beseech you to stand down and allow us to do our jobs–”

“Right, you gormless bugger, if you keep at it, we’ll see you’re accommodated at Her Majesty’s Pleasure!”

“Oh for Crissakes, will you just bugger off, you daft cow? I’m trying to do a job here!”

“Cor, mate, you don’t have to go all barmy. I was only trying to help.”

“I don’t need your help, you gobby knob–”

[the two policemen, still arguing, move off camera, as a flabbergasted Flinders attempts to regain his composure]

“Yes, well. Roger, as you can see, this person not only has the community up in arms, but the authorities, as well. I’m hoping to get a couple of the United players to speak with us, if Daley Blind himself can’t be found, but in the interim, I understand we have footage of another athlete who similarly went on a masked crime spree?”

“Yes, we do, Stuart. It occurred in the American State of New Jersey, and we have a report from a local station there…”

“Well, Roger, there is a difference between robbing banks and preventing people from stealing from innocents. Wouldn’t you say?”

“Certainly, Annabel, but as the Detective Sergeant noted, taking the law into one’s hands is illegal. And, in both cases, the suspect seemed to be an athlete with his name on the back of his strip.”

“Indeed. Stuart, do you have anything else for us?”

“I have with me United captain Wayne Rooney and right back Ashley Young. Gentlemen, thank you for speaking with us.”

[the pair nod in acknowledgment]

“Wayne, have you seen Daley Blind around the training ground today?

[Rooney vainly looks about, hoping to point out his teammate]

“Huh. He doesn’t seem to be about at the moment, but that’s Daley for you.”

“Yeah, he never seems to be around until you really need him. Both off the pitch and on. Remember that goal against Derby last season, when he just popped up in the box out of the blue, Wayne?”

“Well, gentlemen, I’m sure you didn’t mean it that way, but your description sounds exactly like the modus operandi of the vigilante.”

[both Rooney and Young laugh loudly at the suggestion]

“No mate. It can’t be. These incidents have been happening all over town, yeah?”

“Well, it can’t be Daley, then. First off, he’s here with us training. I’ve seen him no less than a dozen times today. You Ash?”

“So, you see, he can’t have been here and all around Manchester at the same time. He’s not the bleedin’ Flash, is he?”

“No, no he isn’t. Remember you were saying in China that he’s the slowest lad in the squad?”

“Well, he is. I’ll grant you he’s got a knack for getting in an attacker’s path and knocking him off the ball, but he just doesn’t get around that quick. No way he’s this hero fella.”

[a shrill whistle sounds twice in the distance]

“Sorry, Stu, the gaffer wants us back to work. We’ll see you later.”

[the two players dash off towards a large group of teammates standing around the manager. As they run, Rooney playfully jumps atop Young, forcing the smaller man to give him a piggy-back ride. The right back stumbles under the weight, but suddenly another player is next to them, wearing number seventeen and, for the brief instance his face is to the camera, what looks like a black mask over his eyes. He subtly sticks a shoulder into the captain, causing him to fall to the ground in a heap. Young staggers a few steps but recovers his balance. In the second it takes for the pair to get their bearings, the interloper is mysteriously gone. The pair stand there, looking perplexedly in all directions, as they try to decipher what has just occurred. The entire sequence is lost on Stuart Flinders, who has turned to the camera to wrap up his report]

“So, the mystery of the masked United vigilante continues, Roger and Annabel, as Daley Blind’s whereabouts remain a mystery. From the Manchester United AON training complex, this is Stuart Flinders reporting. Back to the North West Tonight studio.”

[the in-studio camera catches an unprepared Roger Johnson face-palming. The director quickly switches to Annabel Tiffin, herself struggling to maintain her composure, but nonetheless soldiering on]

“In other news, this evening…”