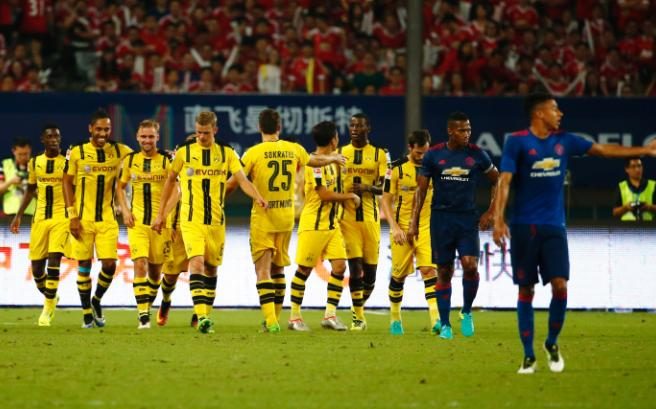 An absolute scorcher of a day – complete contrast to the weather we left in Beijing.

Early this morning we had a walk around the stadium but couldn’t get any of the security to let us in.

Then went towards the city centre – it was so hot we did a lovely River Cruise, which was followed by a return to the hotel for a quick swim before setting off on the long (at least 2 minutes) walk to the stadium.

They had a fan park there, and the Chinese Reds were loving it. Loads of freebies being given out, the FA Cup on display and Fred the Red in attendance.

It was then time to enter the stadium, earlier than most, in order to get the flags up. I walked around the stand towards the press box where I had a great chat with United legend Paddy Crerand.

ONE LOVE flag up early tonight!
We then went round to press area and met the legends Paddy Crerand & Dwight Yorke! pic.twitter.com/bBb8XhLz5K

Most of the English based Reds got their match tickets via Old Trafford, so we were all together at the front of Tier 2. Below us were five full sections of Chinese Reds. Every seat was taken and they did their utmost to create a good atmosphere.

The section of #Mufc Chinese Reds!
5 FULL blocks & sang throughout the game! ? pic.twitter.com/CJHiSMYrdN

Red shirts out numbered the yellow shirts by about 15 to 1 as the BvB ‘Yellow Wall’ was just 1 block at the opposite end.

The game was “forgetful” and players did not seem interested, but a good time was had by fans.

At the end of the 4 – 1 ‘hammering’ the big blocks of Chinese Reds all stayed, cheering for the players.

They were disappointed to see ALL the United players disappear straight down the tunnel while ALL the Dortmund players went to their single block of fans to show their appreciation.

A clear sign that United players / club could learn a lot from Dortmund.

Outside – there were loads of street traders selling off the stocks as cheaply as possible. There were 15/16 shirts and 16/17 shirts (not released yet!) all on sale, so I picked up some Adidas tops, paying about a fiver for a pair. Yes, a fiver but obviously not 100% certain they’re genuine.

Then all three of us then went out for a late meal before heading back to the hotel. The fact we’ve no match or flights Saturday warrants a day of leisure of sightseeing.