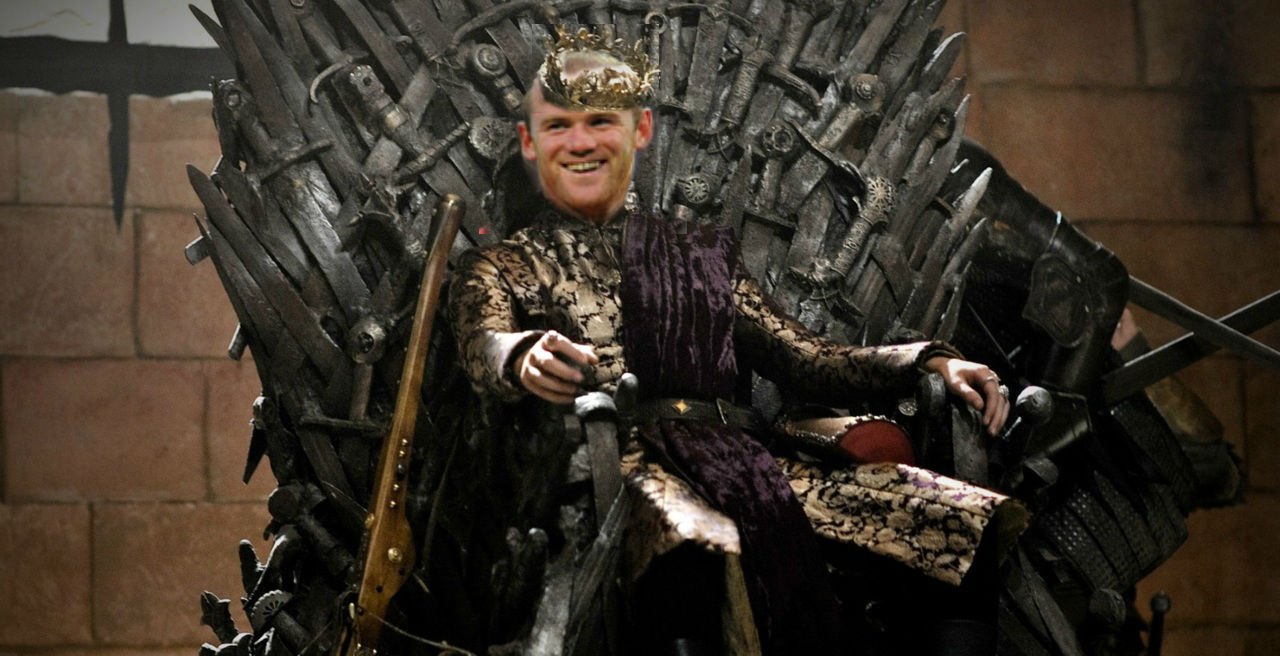 Around five years ago, Wayne Rooney gave up playing football and handed things over to a lookalike from Bootle while he swanned off into an easy retirement somewhere. Likely sporting a beard and a head shaved bald in a manner akin to when Krusty the Clown faked his death in an episode of The Simpsons.

It is the only possible explanation at this pointI to explain what we see. In the meantime, Manchester United and England have been hoodwinked into building a team around an also-ran on a salary that could dwarf the GDP of a small country. Credit where credit is due to Rooney’s agent/pimp Paul Stretford, he must be the hardest working c**t in the game today. The sheer staggering effort the man must expend to bribe, blackmail and brainwash people into thinking his client is any good at all is mind-boggling.

No use as a striker? No problem he’s the world’s best number Ten!

Rubbish number ten? Oh no I told you his best position is as a striker?

No, he’s definitely rubbish at centre forward? Not to worry lads, he’s the English Andrea Pirlo. He’s merely been using the last 14 years as preparation for his ultimate final form.

Turns out he couldn’t do that either. Who knew a man who an erratic passing radar and the first touch of a bulldozer couldn’t be a playmaking maestro. Its almost as if we ignored the last five years of Rooney’s career. As a result, he has, at least in England, become some sort of satirical King of Football. A man seen as the country’s crowning glory and undroppable while being utterly bobbins.

That is until of course Rooney’s last chance to cement himself as a true great for his country came to a shuddering halt in Nice, at the hands of a nation with an entire population smaller than his adoptive hometown. He may eclipse Bobby Charlton and Gary Lineker in statistics but in reality, he isn’t in their league.

Rooney shouldn’t take all the blame for England’s abysmal Euro 2016 exit of course. It was a collective clusterf**k. England’s dismissive arrogance of Iceland, a team that has a fine record over the last two years, was insulting and likely motivated a more than useful opposition.

In many ways the attitude of the English game is more relevant than ever considering recent events. The undeserved sense of entitlement, overly inflated sense of self-importance and constant retreat from reality into past glories make English football a microcosm of the nation’s mindset and political discourse. Just like that attitude damaged its national football team beyond repair, that insane egotism will probably do the same to the country as a whole.

What of Rooney’s teammates too? Joe Hart, if common sense prevails, should have played his last game in an England shirt for a long time, if not ever. His reactions and weak wrists once so lauded now resemble a prototype cyborg with defective programming. Hart was then backed by a defence so shaky the could have challenged a boat full of startled Yorkshire Terriers to a shaking match and won. The whole debacle overseen by a risk-averse owl, appointed by a group of old, white men so out of touch they’d be derided as being backward in fourteenth century Gloucester.

Rooney however, is THE personification of England’s malaise more than anyone. Throughout the tournament the lies over Rooney’s ability continued. He was named man of the match in two of England’s group games despite only offering six-out-of-ten at best. The same narrative that pervaded the analysis of this year’s FA Cup Final where Rooney was apparently superb in that game. An assist aside, his passing at Wembley, was only accurate in the same way that the US military is accurate when they mistake a wedding for a Taliban training camp in Waziristan.

His decline was ignored, managers kept picking him and teammates and pundits were effusive in their praise of the King of Football. Meanwhile Paul Stretford lingered, just out of shot waving a salacious photo at whatever unfortunate bugger he’d had caught out in a compromising situation. The result was Rooney being given a leadership status he isn’t mature enough for and free rein to do whatever the bloody hell he wanted.

“You pick where you want to play Wayne, I’ll just fit evewyone awound you.” Hooted Hodgson. Wayne decided to play the role of some free-roaming show off who sucked the life and enthusiasm out of his teammates, which doesn’t have a designated position because no coach with a lick of sense would indulge such rubbish. Alex Ferguson didn’t. Rooney’s lack of professionalism and dedication to the craft exasperated him so much that as a parting gift in retirement, he promptly threw him under a proverbial bus in his last post-match interview.

“Och aye we won the league but no thanks to tha’ fat bastard!” Or words to that effect.

However, since cocking up with sheer mediocrity for England, just like he has done in every major international tournament since 2004, the media have finally fully soured on a man once dubbed “England’s only world-class player.” He wasn’t by the way, simply because he was never actually world class at all.

United’s new boss, Mourinho or as I’ve been referring to him “No I didn’t want the pr**k but he’s our pr**k now!” would be wise to take the lead of the pervading narrative or, any United fan who has had to suffer the man’s plain bang averageness in the last half decade. Just like England, for United to build an effective new team, they must cast away its expensive shadow. A man, who good as he could be and should have been, would never have acquired the sheer number of caps he did for a stronger country.

Wayne Rooney, the man who somehow manage to insidiously crown himself England’s King of Football, is in irreversible decline as a top level footballer. In fact, he has been for a long time. Whether it is a physical issue, lack of motivation or he really has been replaced by some imposter superfan, it finally appears that his considerable decline has been starkly exposed on the biggest stage.

2 responses to “The King of Football”