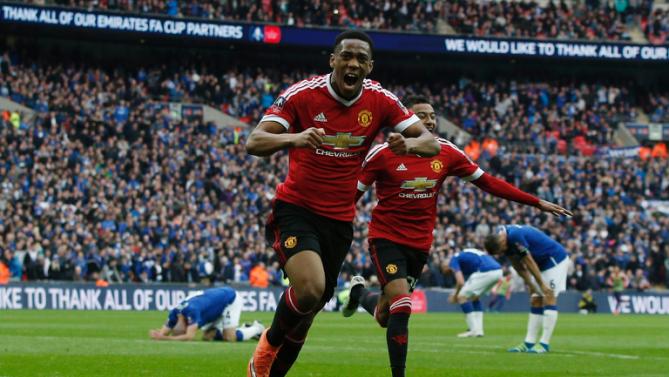 Manchester United’s last minute winner against Everton on Saturday gave fans something to smile about in a season of almost systematic lows, in which highs have been very few and far between. After the dull, mind-numbingly boring football served throughout the campaign, United played with purpose and desire, snatching a last-minute goal to spark the kind of goon that has been very seldom witnessed over the last three seasons.

Albeit briefly, it was like the good old days, when United reached cup finals and scored late winners. However, not only did Anthony Martial’s goal provide United’s moment of the season so far, it also offered Louis van Gaal a glorious opportunity to leave Old Trafford on a relative high.

The Dutchman has been under immense pressure since his team exited the Champions League in December, before losing consecutive games against Bournemouth and Norwich, and looked a dead man walking as United capitulated against Stoke City on Boxing Day.

And yet, being it through sheer luck or lack of decisive action from the board, Van Gaal has survived until now and while the rumours linking Jose Mourinho with a move to the club in the summer refuse to go away, the former Holland manager could well see his contract out next season.

Except that he shouldn’t be allowed to. Not by the club and not by himself either.

Since his arrival in England, Van Gaal has defended his philosophy and decisions by pointing to his track record, which speaks of a manager who has won trophies at every club he has managed. This season, however, has proved football has moved on since Van Gaal’s glory days at Ajax, Barcelona and Bayern Munich. The Dutchman’s vision does not fit the Premier League and, more importantly, does not fit the club he’s been handsomely paid to manage.

Martial’s goal against Everton, however, has put him within a game of winning a trophy in English football, thus giving him the chance to keep his impressive track record intact and, at least partially, saving a season that could still turn into a complete disaster.

Some, United included perhaps, would argue that lifting the FA Cup at Wembley would prove Van Gaal’s process is finally paying dividends and that he should be allowed the benefit of having another season to launch a title challenge.

But, welcome as it would be, breaking United’s three-year-long trophy drought – which, by the way, remains far from a foregone conclusion – should be the Dutchman’s swansong rather than the winning ticket that buys him another 12 months at the club.

Exhilarating as games against West Ham and Everton were, a cup run that has seen United pitted against the likes of Sheffield United, Derby and Shrewsbury is hardly a benchmark upon which a manager should be measured.

The saying according to which a club can only beat the teams they play against rings as true as ever, but the FA Cup has been the exception rather than the rule under Van Gaal.

To his credit, the Dutchman has injected a youthful vibe in United’s ranks and his successor will have a crop of exciting youngsters to work with. The comparison with the 1990 final between the same sides are as misguided as they will be abundant over the next couple of weeks but a success could at Wembley could really prove to the springboard for this United side, provided the right manager is brought in.

As for Van Gaal, he knows that whether is this summer or the next, he will be replaced. It is up to him to choose how he wants to be remember by the fans but, for the first time this season, he has the chance to go out with some restored pride.