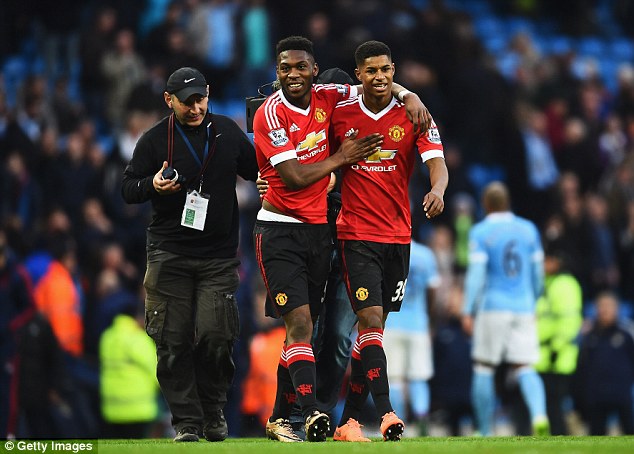 Over the last three years, April has seen me looking longingly at the calendar and looking forward to the start of September – the end of the summer transfer window. It’s usually around this time in spring that rumours begin swirling about United’s next big money signing… last year it was Sergio Ramos and Neymar, the year before it was Gareth Bale and the return of Cristiano Ronaldo.

No matter the name, the excruciating pain of it all comes from knowing that the rumours are total rubbish. Not that we couldn’t afford those players of course, but recent history has shown that United’s interest only serves as leverage for many of these players to secure more lucrative contracts at their current club. Thanking you, Mr Ramos.

The constant ‘missing out’ on players of their ilk is comfortably one of the most embarrassing parts of being a modern United fan (alongside, obviously, the lack of success on the field) – and yet, this year will be no different. Whether Louis van Gaal stays, or Jose Mourinho arrives, the papers will all be talking about how we rebuild over the summer – and it won’t just be at United where this will happen, as Antonio Conte takes over at Chelsea and Pep Guardiola arrives at Eastlands. Arsenal must surely spend big too to take some of the pressure off of Arsène Wenger.

The perceived wisdom in the Premier League has always been that to win big, you have to spend big, but this year has turned those expectations on their head with Leicester now odds-on for the title and a Spurs team made up of academy players and bargain signings (with the odd big-money move sprinkled on top) likely to finish as runners up. Looking at this year’s PFA shortlist, the standout individual performers of the 2015/16 Premier League have not been the stars signed for huge money either, Mesut Özil aside… The German’s fee (£34.5m) sets him apart in a crop of players which respectively cost £11.5m (Payet); £6.75m (Kanté); £930k (Vardy); £375k (Mahrez); and £0… the latter player, Spurs’ Harry Kane, is an academy product. Honourable mentions should also go to Toby Alderweireld (£12m) and Wes Morgan (£844k) who might have been disappointed to have missed the cut but have also represented unbelievable value for money this season.

With the new TV licencing rights kicking in from next term, talk this summer across the league will turn to just how each team will spend the additional £40m/season that the new deal will bring. No doubt the first expectation is that this money will be used to tempt the stars of the Spanish, Italian and German leagues to de-camp to the UK. But let us dream for a moment – no, please, bear with me – that when the dust settles and those teams who miss out on the Champions League (increasingly likely to be United) look upwards to the top four places in the league, the penny drops that spending megabucks on the latest darling of European football does not necessarily equal success.

It’s especially relevant in years of international tournaments and with Euro 2016 on the horizon, the market value for those who over/underperform over the summer will be very volatile. In the past, United’s transfer dealings were done before such tournaments took place (see the signing of Javier Hernandez being completed well before his breakout World Cup in 2010), but with the unsettled picture in the manager’s seat, it’s unlikely that the club will be doing business early this year. Although scouting nowadays has improved to the point that a phenomenal tournament for one player is unlikely to make his career, there’s no doubt that the volume of the rumour mill goes up to eleven during these periods.

So with all teams in the league due to trouser a substantial windfall, how better to invest that money? United is not a club that is short of wedge but the reality of the last three seasons is that throwing funds at the transfer market has bought us mediocrity. The signing of Martial is the only blockbuster which has represented any sort of success so far, and the bright spark of this season has been the promise shown by graduates from our academy. Marcus Rashford, Timothy Fosu-Mensah, and Jesse Lingard are clearly up to playing regularly in the first team, with Cameron Borthwick-Jackson, Andreas Pereira, James Wilson and Guillermo Varela all deserving of more game time to see whether they really are up to standard.

United therefore clearly are capable of identifying and bringing in young talent and Van Gaal deserves credit for the way he has integrated those players over the course of the last two years, but good players still slip the net and having new expensive signings in front of them in the pecking order only serves to force our academy players to look elsewhere for regular football.

Talking of academies, the state of United’s has been a hot topic of late, thrown into the shade by City’s £200m, purpose built new facility across Manchester. Meanwhile, there was almost a full year between Brian Mcclair leaving his post as Director of United’s academy (which he’d held since 2006) and Nicky Butt replacing him but the performance of United’s youngsters at almost every level has been extremely disappointing in recent years. Even former United players are sending their kids to City’s academy. Why not use this year’s TV money to make a statement about what sort of club we want to be in the future by committing similar funds to our youngsters? Now surely is the time.

With all that said, investment in the squad is still required and whilst a Bale or a Neymar would surely prove a massive boost to both the morale (and bank account) of the club, the reality is that we need to start thinking about some sort of coherent transfer strategy rather than throwing darts at the top 10 of world football. Build a genuine transfer policy – one which doesn’t depend on the manager since we don’t seem to be able to keep them – and invest in the future. I’ll write in the future about the sort of players I’d love to see arrive at Old Trafford but right now, the club has a great opportunity to invest the TV money wisely and build on this year’s one true success story – the youngsters.