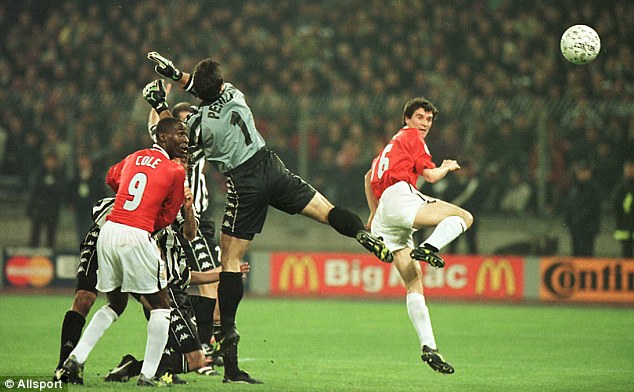 The 1998/99 treble winning season will forever be remembered for the triumphant comeback in the Camp Nou on May 26th 1999, as Manchester United shocked Bayern Munich and finally got their hands on their first European Cup in since 1968.

In a season where the majority of matches have been largely forgettable on this #ThrowbackThursday I look back at my greatest ever game as a lifelong Manchester United supporter and why days like this reaffirm my belief that we will reach those heights once again.

It was this day, a week ago, in 1999 (17 years to be precise) that that dream of adding to the 1968 European Cup success became a real possibility after a couple of years of heartbreak.

One of the greatest team performances ever rescued a match that looked well and truly over and in all probability ignited the belief that anything was possible as Manchester United ended the season as Treble winners.

Manchester United’s come back in Turin was possibly the pinnacle of their treble winning season. After drawing 1-1 at Old Trafford in what was another comeback, with Ryan Giggs scoring an 90 minute plus stoppage time equaliser after Antonio Conte had given the visitors an away goal after 25 minutes, United headed to Turin knowing they had to score.

Ryan Giggs however missed the game through injury and Paul Scholes had to make do with a place on the bench. Juventus were missing Alessandro Del Piero through injury with Filippo Inzaghi starting up top.

A week after ‘that goal’ that would forever place Ryan Giggs in FA Cup history as United beat Arsenal at Villa Park in an FA Cup semi-final replay to reach Wembley, the Reds headed out into the Stadio Delle Alpi knowing a victory would see them reach Barcelona for the European Cup Final.

It was the home team which created the first scoring opportunity as Inzaghi almost escaped Japp Stam to reach a pass from Zidane. It took Juventus just six minutes to take the lead as Inzaghi slipped past Gary Neville to meet Zidane’s delivery, in typical Inzaghi fashion.

Four minutes later and the Zidane-Inzaghi combination once again combined to double Juventus’ lead. The Frenchman’s threaded pass fell to Inzaghi who once again escaped Stam before trying his luck with a left footer. His shot deflected off Jaap Stam’s outstretched leg before looping over a helpless Schmeichel.

Manchester United were 2-0 down after just 11 minutes and another devastating European exit looked on the cards.

United knew before the game that they would have to score at least once to get through. Now they needed twice that figure to have a chance.

The 24th minute saw a corner bring them their first, as poor marking allowed Roy Keane to score a header past Angelo Peruzzi in what forever will be remembered as a classic goal that re-ignited Manchester United.

From the moment Roy Keane scored that goal the comeback was on. Juventus were rattled, yet they were still in the game.

Again the Juve marking was poor in the absence of defender Paolo Montero, who was not fit enough to start, but sitting on the bench.

Minutes later the Yorke almost made it two when he hit the post after more good work with Andy Cole, which had been a feature of the season.

Andy Cole wasted a glorious chance to give United an aggregate lead and Denis Irwin hit the post, but these were rare breaks as the Italian pressure increased.

Inzaghi did have the ball in the net again on 61 minutes, but a linesman’s flag correctly denied him his hat-trick.

Substitute Paul Scholes came on for Jesper Blomqvist and received his yellow card for a two-footed challenge, with a quarter of an hour remaining.

The South American almost created a goal with his second touch as his cutback was missed by everyone in the box.

One of the best games of the competition was sealed by an Andy Cole goal on 84 minutes that saw Manchester United reach their first European Final in 31 years.

Dwight Yorke was brought down by Angelo Peruzzi but the referee played the advantage and Andy Cole was able to run through and tap the ball into an empty net sending Manchester United fans worldwide into hysteria.

The game will forever be remembered for Roy Keane’s selfless act as a yellow card after a foul on Zinidine Zidane following a poor pass from Jesper Blomqvist that saw the Irishman get a yellow card which would rule him out of the European cup final. Paul Scholes also met the same fate, picking up a yellow card after coming on as a sub.

If he was to miss out he made sure his teammates didn’t as Roy Keane gave one of the best performances ever in the United shirt even though he must have been aching inside.

It was Keane’s commanding performance and refusal to be beaten that dragged United back to life and must have inspired them for what would be an incredible end to the 1998/99 season.

In what has been a baron couple of seasons as a Manchester United fan it is good to look back and remember past occasions when we were one of the best teams in world football.

As Manchester United fans we know those days will come again. We need the players to take inspiration from the likes of Roy Keane and his team on that day when they refused to be beaten.

It has been a disappointing couple of seasons in Manchester United’s glorious history. In the upcoming FA Cup Final against Crystal Palace we need our players to match that desire and passion of the 1998/99 squad.