Jonesy curled up under the duvet, his eyes already heavy with sleep. He’d had a long day down at the Kellog’s plant. The lads at the pub would laugh whenever he complained, but making corn flakes for a living was hard sledding. Besides, he’d always been a Raisin Bran man. The missus was still downstairs, watching Comedy Bang! Bang! She prattled on and on about James Corden, who’d gone off to America. Said the program just wasn’t the same. Not that it stopped her from staying up until all hours to tune in, and not that he didn’t have the energy for a little nod-nod-wink-wink, if she’d only taken the hint. Sighing, he turned on his side, allowing his thoughts to drift into never land.

In short order, his eyelids began to flicker as his brain slipped into deep sleep. The dreams playing out on the other side of those eyelids flitted by in quick succession. Finally, his mind settled on a picnic scene in a meadow filled with long grass and flowers. The missus, looking even younger and slimmer than she’d been when they first fell in love, laid out a brightly checkered cloth. Humming birds flitted around her head and squirrels scampered about on all sides. He’d forgotten how silky her blonde hair had been, it’d been so long since he’d seen her without curlers. She began laying out plates, bowls, and utensils, pulling them from a basket that couldn’t possibly have held so much.

When everything was set, she reached into the basket one last time, withdrawing a huge box of corn flakes. She couldn’t be serious. His mind had been drooling at the prospect of a decent fried chicken, perhaps with some potato salad on the side. She could make a delightful potato salad when the mood suited. He blinked in surprise when he realized his bowl had grown to the size of a wash basin. Smiling cheerfully, she poured cereal into the massive bowl until it was heaping, and then emptied an entire quart of milk into it.

“You don’t expect me to eat all this do you?” he asked incredulously.

Her radiant smile intensified as she nodded with the enthusiasm of a door-to-door salesman.

“Bloody hell,” he cried. “You know I don’t even like the stuff!”

Her smile brightened even further as she snuggled up next against his body, offering to feed him. He sat there defiantly scowling, lips tightly shut and jaw clenched. The missus waved the spoon around and made comic faces as though he were a stubborn infant. She’d done the same with their lad when he’d been a babe, pretending the spoon was an airplane and his mouth the hangar. It had always worked. Here in the meadow, though, Jonesy steadfastly refused to open the hangar doors whenever she tried to bring the spoon in for a landing. With each attempt, the missus began to look older and less attractive, until she was back in curlers and a faded frock. The smile never left her face, however. Although she maintained her cheerful demeanor, he began to wonder why she wasn’t saying anything. She was never at a loss for words whenever he came home a bit late from the pub, or sat in front of the telly transfixed to the Man United match. He lived and died with the Red Devils even more than the missus’ was obsessed with Comedy Bang! Bang!

A shadow suddenly blocked out the sun. Looking up, he saw a slightly pudgy bloke with ginger hair and a pathetic attempt at a van dyke looming over them. Was it? No, it couldn’t be! 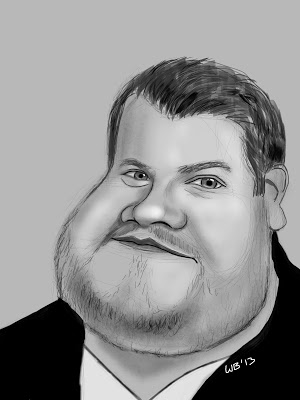 “He doesn’t deserve you,” James Corden said, his eyes locked on the missus. Extending a hand to help her up, he added, “Come away to America with me!”

The missus looked back and forth between them, momentarily torn. Jonesy didn’t worry. They’d been married more than thirty years. She’d never pick another man over him, no matter how funny or handsome she might think the blighter was. Then, against everything in the realm of possibility, her smile became brighter as she took the comedian’s hand, happily allowing him to waltz her across the meadow and out of sight.

“Good riddance!” a stunned, outraged Jonesy shouted after the now departed figures. His eyes settled on the picnic basket, and he opened the lid. If not some cold chicken, perhaps there was a sandwich or two inside. Food always calmed his temper. At this point, he’d even settle for a box of Raisin Bran. As he rummaged, the sky above him filled with dark clouds. Without further warning, the picnic was washed away in a fierce downpour. Realizing he was becoming soaked to the skin, he ran for cover under a large oak. As he huddled there hoping to dry off, the tree transformed into the entrance to the Kellog’s plant. He looked out to the parking lot, debating whether to make a run for his car before realizing he didn’t know where it was parked. Nothing else for it, then. Opening the double doors to the plant, he stepped inside and clocked in for a shift. As he made his way to the assembly line, Davis came up to him.

“Have you heard?” his colleague asked. Without waiting for a reply, he leaned in to inform Jonesy, “They’re giving the old man the sack!”

“What?” Jonesy reacted. The boss had always been a hard man, glaring at you with his pugnacious face from over the clipboard that never seemed to leave his clutches. Still, Jonesy wasn’t one to handle sudden change well. “When? he asked. 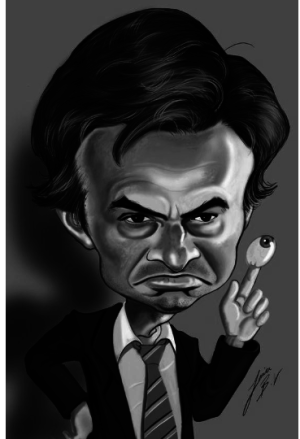 “With immediate effect,” Davis nodded with authority. “What’s more, they’ve hired some little gypsy away from Nestle’s to take his place!”

“Oh, aye,” Davis nodded again. “Thinks a lot of himself, he does,too. Fancies himself a real special one.”

Leaning in again for a further confidence, Davis was interrupted by a short, olive-skinned fellow. An unruly mop of hair and thick black eyebrows framed beady brown eyes.

“You there!” the interloper cried in a strange accent, Spanish perhaps. “Get back to work!”

Before Davis could move, the man reached up and poked him right in the eye. Bloody hell, Jonesy thought. That was uncalled for.

As Davis rushed off, one hand clutched over his face, the obnoxious little fellow turned to Jonesy. “Who are you?” he sneered.

“Well then, don’t stand there like an idiot. Get back to work!” Before Jonesy could think, a finger came right for his eye.

Stars burst in his mind and a loud beeping sounded in his ears as Jonesy suddenly jerked awake. Eyes watering, he could only just make out a huddled grey mass curled on the pillow where the missus should have been. Had she really gone off with James Corden, he wondered.

“Mrowr,” the grey shape said, seemingly in reply. It was the cat. The little ball of hate had pawed him in the eye to wake him! Murderous thoughts formed in Jonesy’s mind. Before he could act on them, though, the missus appeared in the doorway, a spatula in one hand, morning paper in the other.

“Are you going to turn that alarm off? Breakfast is on.” She tossed the paper on the bed. “For you too, Giggsy,” she cooed to the cat before turning to head back downstairs. At the mention of food, Giggsy leaped off the bed in hot pursuit.

“You’d better run,” Jonesy mumbled as he rubbed his eye. “Else I’ll drop you off at the back door of the Vietnamese restaurant ’round the corner.” Slamming his hand down on the alarm clock to rid himself of the noise, he tried to focus on the paper. When the pain subsided, he picked it up, turning immediately to the back pages. Even though he could see clearly now, he had to rub his eyes one more time, then pinch himself to be certain he wasn’t still dreaming. In bold type, the headline read, “United Hires Mourinho! Van Gaal Sacked With Immediate Effect!”

Immediate effect? Bloody hell, life was even more of a nightmare than his dreams. As he wondered what to do, the missus’ shrill voice came from downstairs, reminding him again breakfast was on. With visions of giant bowls of cornflakes floating through his mind, and the missus, James Corden, and José Mourinho’s collective laughter ringing in his ears, Jonesy glumly dressed to meet the day. After all, there was nothing else for it.