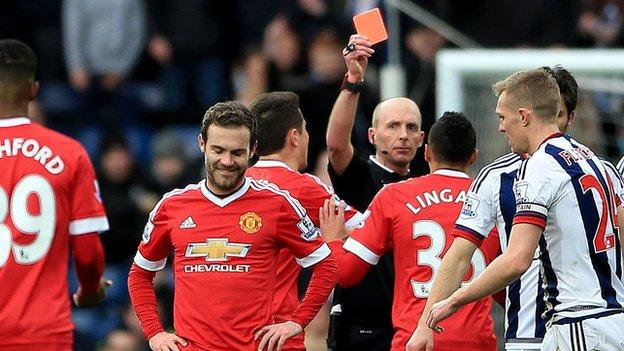 There was a vague sense among United fans at 10pm Wednesday night, that a corner had been turned. A hushed hope. A peek of possible promise.

A patched up United team’s win over Watford was hardly convincing. Far from it. Watford should have been out of sight before Juan Mata guided a wonderfully struck dead ball into the top corner like a prime marksman finding his target from the trenches. However, off the back of a thrilling win against perennial almost-title challengers Arsenal and the sound thrashing of a bunch of semi-pros whose club is younger than my oldest guitar, United showed grit, determination and desire against Watford to dig in and not fall to pieces.

Finally, with a team consisting of square pegs in round holes and kids who weren’t even known by their own families before debuting, nevermind the fans, Van Gaal and his backroom were finally getting it.

Then it was back to normality at the Hawthorns on a crisp Mother’s day afternoon. Crushing, dispiriting normality. United lost. Without a fight, without ambition and in Juan Mata’s case, without a bloody braincell. De Gea – imperious as always – Martial and a returning Smalling were the only ones exempt from criticism by putting in creditable displays as they always do. Throw young Marcus Rashford in with that trio too! He was largely anonymous but you can’t expect the kid to perform miracles every damn week. He’s earned the time to develop and get on while maintaining fan support.

Van Gaal, in a week where it looked as if he might salvage his job after all, belted the optimism out of those players like Anthony Joshua viciously knocking the consciousness out of his beleaguered opposition. United were back to their tepid, ponderous football familiar to us all. Well almost, because it seems to be getting worse. United can no longer even maintain possession effectively. Unless it was going sideways and backwards at a laborious pace United were sloppy in possession. Wasting long periods of time in West Brom’s half with the ball with irritating regularity.

Even with ten men, United seemed to be directing traffic thanks to the total lack of ambition in the character of Tony Pulis. Except when you scratched the surface United were like a nerdy, power-mad, traffic warden at a pelican crossing who pretends to control the flow of cars when actually, the lights nearby were working perfectly. It was a false economy and we all waited for United to be hit by the inevitable truck.

That truck bared the name Solomon Rondon, a beast of an athlete and everything United were not today, as well as a centre forward crying out for a manager slightly more adventurous than the average Daily Mail reader in Tunbridge Wells. Rondon, well marshalled by Chris Smalling most of the day, was inexplicably allowed to take a touch and turn in the box before lashing the ball into the net. It was a level of ineptitude that would be shocking had it not happened so many times on Van Gaal’s watch in the last fifteen months.

Up until that point, West Brom hadn’t done much of anything. They didn’t need to. With United reverting to their familiar ineffectual selves, Pulis – a very canny operator to his credit – knew it was only a matter of the team keeping their shape and biding their time. Once a goal up West Brom never looked like losing. United never looked like doing anything else but losing.

Once again during Van Gaal’s time in charge of Manchester United, the players turn the corner and head straight into a brick wall. There has recently been whispers of the club letting Van Gaal see out his contract before handing over to Ryan Giggs because he understands the “values” of the club. Snubbing any of the other four thousand better options in the process. That idea has hopefully been consigned to the dustbin for something more logical. At this point having a broomstick offer up a team talk might get more of a rise out of a squad of players that are leaderless, rudderless and utterly without the fortitude required to be a winning team.

Maybe if Woodward does have his one moment of common sense and sacks Van Gaal he could take himself with them and go on the road as a Laurel and Hardy style double act. Between Van Gaal’s staggering hubris and Ed Woodward’s lack of anything that isn’t a bemused look from a supporting Simpson’s character it wouldn’t be funny at all. It would just be better than the tripe we all have to look at now.