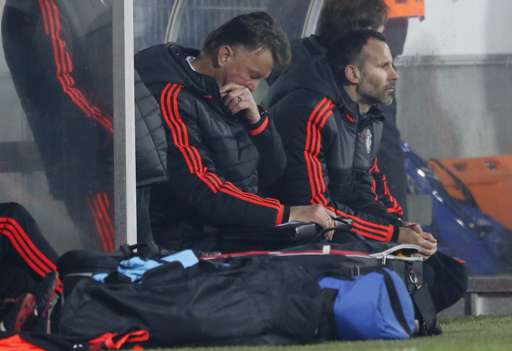 “We’re fucking shit!” That was the chant from travelling reds after another low point on a winter’s night in Denmark. They’re not wrong. Sometimes being blunt is just the best way to go. So when considering the lengthening list of low points this year, paying big bucks to freeze your tits off in Herning to watch United throw in the towel to a semi-pro team 12 years younger than yours truly was likely the last straw.

We’re tired. We’re cold. We’re pissed off. That will be the sentiment from travelling fans in local Danish boozers after the latest omnishambles presided over by a manager who clearly can’t be arsed.

Louis Van Gaal, despite his trials this season, much of them self-inflicted, still retained some dignity for much of his time here. His reputation, his success and the context of operating within a club in disarray gave him a let off. His long, slow professional suicide since, excruciatingly carved in the history books over the last two months, has, however seen any good will and patience disappear down the toilet with his reputation.

If one moment really summed up the season it was Juan Mata’s pathetically weak attempt to win the ball from FC Midtjylland’s giant substitute, Paul Onuachu, who then stumbled the ball to the edge of the box, before easily firing a low shot into the bottom corner. After the game Onuachu said of United “We expected more [from Manchester United].” Quite Paul. Quite.

Things went badly before kick off. De Gea, the brightest light in an otherwise bleak season, was injured in the warm up. He was replaced in the starting lineup by Sergio Romero. The Argentine maybe a world cup winner but Dino Zoff he ain’t. Still Romero turned out to be United’s man of the match, producing a series of superb saves. The Danish minnows should have been well out of sight by the hour mark such was the ease they were able to carve through United like a refined samurai sword.

No wonder Paul Onuachu was surprised.

Nevertheless after a rather dull start and Midtjylland contriving to miss a sitter, Memphis gave United the lead six minutes before the break. Hope at last! United’s once brief great hope for the future, given a chance in the absence of Rooney may just have have his career back on track.

This is the United of 2016 though. You can always rely on them to royally cock things up and cock things up they did. Michael Carrick, ever reliable but evidently effected by whatever disease has turned a bunch of highly paid professional into a bunch of weak willed poltroons, gave the ball away that lead to Pione Sisto’s equalizer. You’d be horrified if such blunders hadn’t become customary in every facet of United.

Poor old Sergio. The lad had the game of his life but was let down so badly that he was left no chance whatsoever in the goals. Along with Martial, who was a willing if not largely unproductive runner in the end, he was the only one who seemed to care.

At this point the demeanour of the players is as worrying as the ever more muddled behaviour of the manager. Even their analyses of poor performances seems to lack any emotion whatsoever. ‘Could do better.’ ‘We should do better.’ ‘We’ll get back to work on the training ground with the lads and put it right.’ It is rhetoric and delivery so robotic it’s like they are reading from cue cards held up by Frans Hoek off camera, making threatening gesticulations towards them if they go off-script.

To lose because you aren’t of the sufficient quality is one thing. You can still walk away from things with your head held high. Yea we didn’t win but we left everything out there, we simply beaten by a superior outfit. No disgrace in that.

To be outfought, outbattled and outworked by the opposition. For the other team to want it more, as Midtjylland did tonight, hustling United out of the contest, as Sunderland did at the weekend along with many other teams have done this season, is unforgivable. With a new manager very likely on the way this summer, many of these players are playing for their futures, yet the desire is so lacking they could pass for a dying member of the House of Lords. Van Gaal maybe a lame duck but there is no excuse for the players to down tools in the manner United players have done over the winter. Many of them deserve to follow the backroom staff, Woodward and the Glazers out the door to pastures new. Far away from Old Trafford.

In all competitions, United have won just nine games since the 1st October. This is relegation form and the slide shows no sign of abating. United cannot afford to wait until summer. A defining crossroads in the post-Ferguson era is nigh. Time to make some big decisions, decisions that need to be made quickly and decisively.