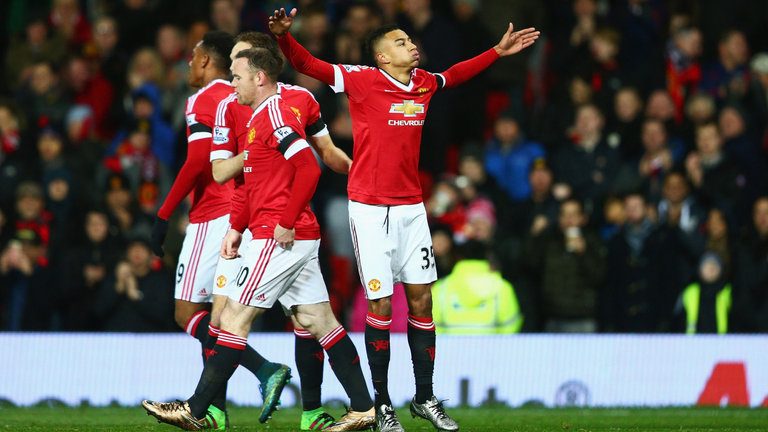 Genuine entertainment at the, widely optimistically named, Theatre of Dreams has seldom been served up during a, by Manchester United’s standards, tumultuous season to date. Perhaps a more appropriate name for our great arena during a difficult December would have been The Chamber of Torture – where a painstaking run of form pierced any semblance of a title challenge, and 75,000 loud and proud Mancs sign up for a weekly, excruciating two hour session watching a United side limping throurgh, a pale mimicry of the all-sweeping, swashbuckling nineties and noughties sides.

For all United’s gloating and smugness at their flourishing off-field brand, their on-field ‘brand’ this season has not been marketable to many a United fan’s eye. Laborious, turgid and pedestrian are words which have been associated with Manchester United down the years as infrequent as a smile drawn across the face of Louis Van Gaal.

Those words have been replaced in the last two performances by expression, freedom, enjoyment, ruthlessness- words more akin to a typical United lexicon. Speaking from my own experience, limited as that may be compared to many a United fan who have experienced more painful thick and thins than my 24 year old eyes, waking up realising I was going to Old Trafford on a Saturday was everything a young lad could wish for – seeing my childhood heroes, style and experiencing that winning feeling. It could not be topped. More recently, it has been an ordeal, an obligation, as much fun as a tooth extraction.

I sensed from my vantage point, in the upper Stretford End, that the crowd were up for this game. The raucous backing from the terraces seemed to transmit to the players. I don’t know what it is about night games under the lights at Old Trafford, why it brings the best out of our lot, whether the stands are packed with more ‘diehard’ reds than your average Saturday happy-clapping three o’clocker but the atmosphere was something on Tuesday. The away support we generate speaks for itself, it is unparalleled, and we need the home support on top form like midweek, being the twelfth man could give us an even bigger squeak of making the top four once again.

Until Tuesday night’s comprehensive victory over Stoke City that is, who did not make the game as stiff a challenge as was predicted by many clued up observers. Mark Hughes has done a sterling job in the Potteries to turn rugged into chic but his side really did not show up at a ground that is far from favourable for them.

In truth, United simply did not allow them to: United started the match how the fans expect, with tempo, pressing, moving the ball at pace, and imposing themselves on the game. Most importantly, as the players have alluded to in recent weeks, there is expression and freedom once they cross the white line. Maybe Van Gaal has thought ‘bollocks to the rigidity, it’s not been working things cannot get much worse, we might as well express ourselves and at least give the fans what they want to see, it might not work but we will have a go’.

For the first time since the Lord can remember, I, for one, left Old Trafford with a beaming smile etched on my face. Of course, with a deficit on the top four to claw back, winning is everything, but I was entertained royally. Winning sometimes just is not enough for some fans, who have been brought up on a diet of success and known nothing but a cavalier, front foot approach.

Fans have been craving a return to the good old days of playing with the Ferguson flair rather than the monotony of Moyes. Van Gaal consigned the stale possession, albeit momentarily in all likelihood, to the scrapheap and actually conceded possession to Stoke on Tuesday, with all the intention of hitting them with the pace of Martial and Lingard on the flanks. It worked a treat.

The second goal in particular, richly deserved for Anthony Martial, was one to take the breath away. The calmness out of the back, then the swift transition between the lines, the silk of Juan Mata, the vision and awareness of a rejuvenated Wayne Rooney, the pace from Martial and the finish of unerring accuracy and precision once in the position was a throwback to a previous vintage that the fans want to taste on a more regular basis under Van Gaal. It was arguably our goal of the season – if Van Gaal needs a nudge on how we want his side to play, he should watch that goal on repeat. It was the epitome of the United way.

If, by all accounts, this United side have few sights to behold, taking in Anthony Martial gliding effortlessly at pace past his defender is a veritable delight. In front of my own awe-struck eyes, this guy was petrifying defenders, Glen Johnson in particular was given the absolute run-around. The goal and assist was just desserts for a player who, for a supposed (somewhat justifiably) gamble, has lit up the place since arriving from Monaco. He is only going to get better and better with age, the potential is scary. He could go on to be a world beater, hopefully in our colours for the large part of what will be a fabulous career. With Chelsea our next opponents, Branislav Ivanovic will not be waking up on Sunday morning relishing the prospect of handling our French whippet. Ivanovic was running through treacle earlier this season and that is an area to exploit in the crunch match.

To give Van Gaal due credit, to continue to show youth its head during the undoubted nadir of his tenure in charge is bold. In fairness, that is one area of the club that Van Gaal is well tuned into – the history of youth and the ‘if they’re good enough they’re old enough’ mantra. It has reaped decent individual rewards even if the collective reward has not come to fruition: The emergence from relative obscurity of Cameron Borthwick-Jackson, fast-tracked from the youth team in similar fashion to Paddy McNair last season, despite miniscule involvement with the youth team setup has been refreshing to see and has certainly helped to fill the hard-hitting Luke Shaw void. For a man still wet behind the ears, his willingness to support the attack, positional awareness and being defensively sound is very encouraging. He has a long way to go, don’t get me wrong, I’m not getting carried away but he is making nothing but positive strides.

Likewise Jesse Lingard who will understandably polarise opinion, the jury is still out but his displays recently are equally promising. Fans love a trier, he will work his socks off for the cause, he provides pace out wide and a lot of effort and endeavour, naturally playing for his boyhood club. There are earmarks of the Welbeck about him; guilty of a lack of composure despite getting into some great positions, but hopefully that calmness, as demonstrated with his breakthrough goal for the seniors against West Brom, will come with age and more game experience. What he will develop into remains to be seen, whether he has the quality to sustain a place at United but the boy is doing well on current form.

With Van Gaal overseeing a change in style against Derby and Stoke, the acid test of whether United have turned a corner will come into full focus on Sunday with a crunch encounter against Chelsea at Stamford Bridge. United are all of a sudden within touching distance of Arsenal in fourth place, despite them getting lauded left, right and centre with us at our worst for a good while. United need something at Stamford Bridge to stay in contention, with points bound to be dropped at the top this weekend.

February is a make or break month and it has got off to the perfect start. The appetite has been whetted after Stoke, more backward steps after a positive one cannot be afforded.