Appearances can be deceiving. For the better part of the season–which has ironically also been the worst for Man United fans–manager Louis van Gaal has faced withering criticism over the squad’s cautious approach to matches. With rare exceptions, virtually every eleven the Dutchman has sent onto the pitch has seemingly preferred to play keepy-uppy than going for the opponent’s jugular. Supporters, pundits, and former players have almost unanimously–put your hand down, Nicky Butt–expressed their dissatisfaction with the mundane performances which have the club outside the Champions League places. It’s no wonder a mob has formed, baying for the gaffer’s head, Only it turns out such tactics may not be coming from Van Gaal, but from his assistant, long time United man Ryan Giggs.

You would think the boss, rather than the second-in-command, would decide how the club plays. Yet, new evidence has been uncovered suggesting Giggsy has secretly been pulling the strings in the clubhouse. When the Red Devils took to the pitch at Old Trafford on Tuesday evening, with Stoke City providing the opposition, Giggs was nowhere to be seen. It was February 2nd and the Welshman is known for his whiskers. Rumors quickly arose he had tired of life in LvG’s shadow, fled the club, and would re-emerge within the week–rather than six– as the new boss at Parkhead, At the writing, neither Giggsy nor Celtic had denied the rumors, although Man United’s publicity department released a statement claiming family illness had kept the assistant manager from his usual place next to Van Gaal. Similar subterfuge has been used to conceal departures from the press in the past. So, one takes United’s word at their own risk.

More importantly, with the slouched form of their former teammate glaringly absent, Wayne Rooney, Juan Mata, and company couldn’t wait to sink their teeth into Mark Hughes’ Potters. Before the opening quarter-hour was up, Jesse Lingard threw himself at a sumptuous Cameron Borthwick-Johnson cross heading past a helpless Jack Butland. The young full-back was afforded time and space to deliver thanks to  a cleverly angled pass from Mata. One-nil United. Mata should have scored himself shortly thereafter. Instead, he headed wide for the second match running. The Spaniard made quick amends, combining with Rooney to move the ball swiftly down the right flank, the captain ultimately sending a perfect cross across the top of the eighteen to Anthony Martial, who was more alone than Matt Damon in The Martian. The French teenager took the pass with one touch, then curled a shot back against the grain into the upper ninety. Two-nil, the home side. Nor was United content to sit on their lead, as they have to their regret too often this season. Rooney had a goal disallowed for fouling a Stoke defender to free himself up before Mata again orchestrated a beautiful strike. Charging towards the box, he fed Martial, cutting in from the left. The youngster dribbled into the six before slotting across the goalmouth for Rooney to legitimately tap in, staking United to a three-spot.

In his post-match presser, Van Gaal played up his side’s newfound attacking prowess. Given the manner in which the season has played out, the Dutchman surprisingly claimed such a dynamic performance was what he “liked to see.” He also stated his satisfaction with Mata’s performance in a central role, happily noting his involvement in all three tallies. Suspiciously, though, LvG stopped short of saying Mata had claimed the role going forward. Perhaps he has to check with Giggsy when the power behind the throne returns? That the inmates may be running the asylum was further alluded to by the Dutchman’s tacit admission Michael Carrick had explained to him it was much easier to control the match when the squad can stake itself to an early lead.

Of course, it’s only one match. The performance could just be an outlier. It’s possible the players were merely releasing pent-up emotions despite the gaffer’s instructions. The truth will only become apparent should Giggsy return to the sideline on the weekend against Chelsea. If he does, with the club returning to its passive ways, the truth will finally be revealed. On the other hand, if he pops up in charge at Parkhead while his old club continues to run rampant at Stamford Bridge, one can only feel sorry for the folks in Glasgow. 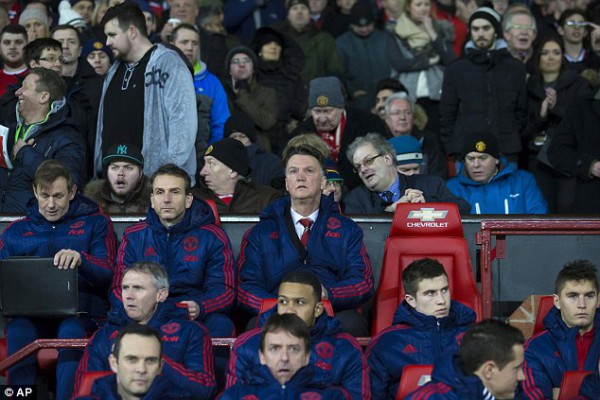