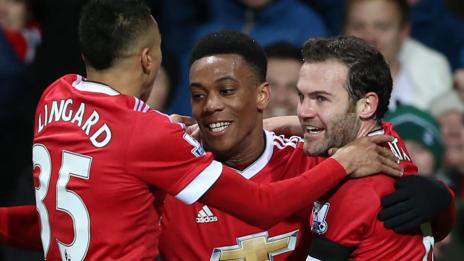 It is ironic that in the midst of easily the most exciting season in English football since Manchester United and Arsenal engaged in their brawls for all at the turn of the century, that the one predictable and eye wateringly boring thing has been Manchester United. So often the purveyors of champagne football, United have produced football so horrible, so dull, so anti-entertainment, you half expect it to be entered into this year’s Turner Prize as a post-post-modern installation piece. “A commentary on the crushing conformity of unfettered capitalism through the medium of shit football” would be hailed by the critics, as the most innovative and brilliant thing in art since Andy Warhol painted a tin of food.

I did forget to mention of course that the other predictable thing is Arsenal. Predictable that their soft, mollycoddled underbelly has been exposed yet again as their title challenge begins to drift away before their annual Eurotrashing from Barcelona.

Back to the matter in the hand and Van Gaal evidently decided last Friday night he’d had enough of his bleak, art installation piece as the rest of us and United started playing football again. And scoring goals! Nevertheless playing football against the Derby team that turned up on Friday was easy. Derby hadn’t won in 6. Derby were scared. Derby were timid and let United play. Even against this United that was a huge error. So with all that being said, our enthusiasm was tempered and laced with heavy irony. It was seemingly a performance in isolation.

However, on Tuesday, United fans in ‘Oh Tee’ were given an unexpected gift. A pleasant surprise. Bully’s special prize. A Brucie Bonus. We were given a really good performance against a good team. Hallelujah! Praise the Lord (Eric Cantona). The boys can play. On the day United fans spared a thought or three for the victims of the Munich Air Disaster 58 years ago, a performance of that kind wasn’t before time.

Sure we could thank Mark Hughes for his bizarre team selection, which saw him leave out Xherdan “Shaqiri Shaqiri!” and deploy the gruesome twosome of anti-footballer Jon Walters and 35 year old Peter Crouch. Those two are hardly on a level with Barcelona’s technically proficient but character deficient front line. Also Stoke’s one-man defensive mountain, one time red Manc Ryan Shawcross, was missing through injury. Shawcross is a defender I have long since championed. A superb, old-school centre half, with great positional awareness and a natural leader, Stoke were always liable to miss him terribly.

Nevertheless, far worse teams than Stoke have come to Old Trafford in recent times and come away with points. Southampton being one, Norwich another. The fact that United decided that possession wasn’t the be all and end all and what mattered was getting forward, playing at pace and scoring goals warmed the heart. That’s entertainment! History also tells us that at Old Trafford, that’s usually three points too.

The performances? Well Martial continued on his one man mission to drag United kicking and screaming out of mediocrity by producing another outstanding display from the left wing, Mata was a maestro and Lingard was actually decent! Madness! Most odd though was the performance of Wayne Rooney, he was excellent. Again! Can you believe that?! Seven goals in seven games from a man who has been written off by so many – including me – in recent seasons that you half expected Jesus Christ to descend from the heavens because he mistakenly thought he had to raise him from the dead. I’m not entirely convinced that this will last of course. It wasn’t long ago Rooney was benched without explanation and Rooney tends to miraculously find form when his sacred, untouchable role in the team comes into question. We’ll see how long it lasts.

For me though, there was a special joy in watching young Cameron Borthwick-Jackson. A man with a name so posh you expect him to retire from the game by heading to a safe seat constituency in the Cotswolds, to become a Tory MP. You can imagine Cameron Borthwick-Jackson says ‘No to the EU.’ The kid was terrific and not for the first time. He was everything you wanted from a young fullback. Energetic, enthusiastic and exciting to watch, he gave Martial a run for his money for man of the match. While I am sure we all hope Luke Shaw fully recovers and regains form the fact we now have another dashing, young leftback bombing forward and getting down the throats of the opposition should imbue us all with optimism.

In an era where United’s vampiric owners have divested from the infrastructure – most criminally the youth academy – the optimism last night’s performance and young Cameron Borthwick-Jackson offers is a welcome tonic to the oppressive melancholy that has settled around Manchester United.