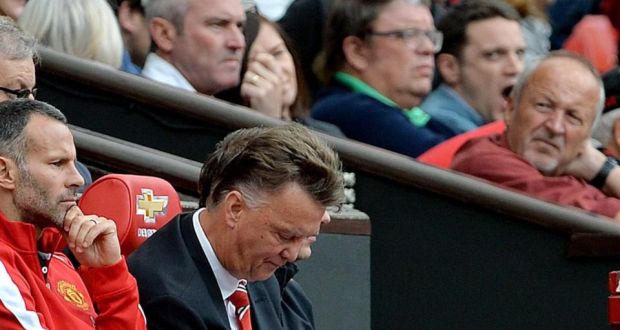 With reports emerging that Louis Van Gaal is preparing to walk away from Manchester United, fans across the globe can only hope the reports are true.

Louis Van Gaal has sucked the life out of Old Trafford. Gone are the days of Ryan Giggs flying down the wing setting up Eric Cantona or Dwight Yorke to score a screamer as they brush aside opponents.

We as United fans have to come to terms with the fact that Sir Alex Ferguson is gone and possibly the United of old is no more too. Teams used to fear coming to Old Trafford. Wayne Rooney spoke of players tensing up in the tunnel as the United emerged from their dressing room and lined up beside them ready to battle. The captain and his teammates had the match won right there, although nowadays teams come to the Theatre of Dreams knowing they have a great chance of all three points, never mind a draw. This needs to change — forming Old Trafford into a fortress again.

Passion was always a word you would associate with United. It started from the manager then to the pitch. Players like Roy Keane, Steve Bruce, Ryan Giggs, Gary Neville… I could go on and on. They all gave 100% for the cause. Young players came into the club looked up to them and were partly scared of being picked on by them. Cristiano Ronaldo wasn’t long changing for the better once he realised that the likes of Keane and Neveill wouldn’t stand for any nonsense or negativity that was brought to the club on his part.

Currently, it is difficult to identify any leader at the club.  Nor are there any signs of leadership from the dugout. When things are going wrong on the pitch the players hide; Rooney as captain looks busy running into the ground chasing the ball while not really effecting the game. It’s all well and good shouting in the dressing room at Anfield just because it’s Liverpool but as on many occasions over the last two seasons, had it not been for David de Gea, United would have lost that game and many more.

The biggest problem I have with the Van Gaal regime is his stubbornness and refusal to put down the folder he constantly writes in during a match and get up and earn his money on the touchline. I grew up in an era when Sir Alex Ferguson barked orders at the players from the touchline and motivated his team. If the game is not going your way and you look to the manager for guidance and he is jotting down constantly in his notebook, how can that fill you with confidence that you can with that game? Neville often spoke of his fear of Fergie on the touchline if they were losing as at right-back he would be closest to him during the game, for one half at least.

If the manager is hiding in his seat, we can understand the players hiding on the pitch.

It doesn’t help that when we look down the road at Liverpool they have one of the biggest motivators in football. Jurgen Klopp kicks every ball and his celebrations at Norwich on Saturday were incredible. I realise it was a last minute winner in injury time in a great game but I cannot imagine Van Gaal doing likewise in similar circumstances. He’d simply make a note of it.

While United fans might not wish to applaud Klopp but if we’re honest with ourselves most of us would love him in charge of our club if only for his passion alone.

Van Gaal’s latest comments that he has failed to live up to the standards of Manchester United are perhaps an admittance of defeat. He looks a broken man with little idea in how to get out of this mess. He had intended to retire after the World Cup in 2014. The lure of our club proved too tempting and his belief that he could turn things around in three months are laughable now. United are worse off now than under David Moyes. With over £300 million spent since Sir Alex left, our best player is still De Gea, a Fergie signing.

With Holland having a remarkable World Cup I wonder if Van Gaal wishes he had retired to his Portugal paradise in the summer of 2014 with his head held high. However fact remains he is on borrowed time. He cannot be here next season. For his own sake and for the chance to retire with some dignity he should walk away. He will not want to end an incredible managerial career with the sack.

United also cannot give the man another £200 million in the summer if he is in the final year of his contract. The United board need to act now. Whether it’s Ryan Giggs, Jose Mourinho, Diego Simeone or whoever, United need to get passion and attacking football back at Old Trafford and make Old Trafford a fortress once again. Only then can we move out of this bleak period in our history.