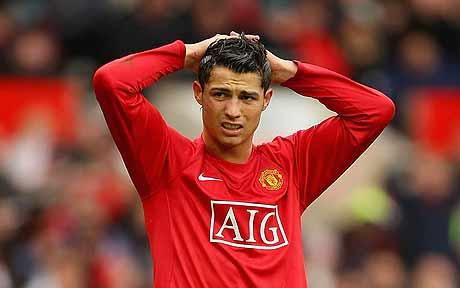 There are a couple of unintended moments in the new piece of propagan…erm I mean documentary film on Cristiano Ronaldo, amongst the all-consuming vanity and people telling him and us how great he is that penetrate deep to the character and heart of a man who has become a modern day capitalist deity.

The first is when he describes his feelings on winning the Ballon d’Or – a meaningless bauble – at the end of 2014. He describes it as life changing and the culmination of a year’s work. I hope his teammates didn’t see that, they might be forgiven the satisfying culmination of a year’s work would be winning a few team trophies, like a league title or the Champions League. But it is the measure of how selfish the man is.

Over the past 2 years Ronaldo has proceeded to use Manchester United, a club he claims great affection for, essentially as a vehicle to further his brand and get paid more money by his current employers. United and us, the fans, won’t see any benefit of this because Ronaldo in all likelihood doesn’t hold much affection for anyone but the man in the mirror, certainly not Manchester United. Nor will he be returning in the future.

In a recent interview to promote his first steps into Hollywood he answered a question on whether he would come back to the Theatre of Dreams, he answered “The future? Nobody knows.” With a pearly white smirk creeping across his staggering shiny, porcelain-like face. This was just before launching into a thinly veiled putdown of United in the post-Ferguson era with all the subtlety of a Lee Evans stand up routine. Worth noting he didn’t directly rule out moving to City either if you read between the lines. Thanks pal!

Whatever the truth of his desires are, the fact is as far as the transfer circus with current World Player of the Year goes I’m bloody sick of it and will be fit to hear no more of it! Not that many fellow Reds will let that view slide as the man can do no wrong for them.

Can’t blame my brothers and sisters to some extent, the man was a wonderful player during his time at Old Trafford. Indeed the obsession to be the best in the world that has utterly consumed him has made him the truly great footballer he is. Such fawning adoration, over players still at United, however is to forget the unsavoury episodes in his United career and is frankly more than a little bizarre for a highly paid, mercenary entertainer.

After the 2006 World Cup and the infamous wink – the biggest storm in a teacup since somebody tried drinking a hot beverage on a particularly stormy day in Kendal – Ronaldo spat his dummy out and publicly stated his desire to leave. All while the rather blatant hand of the Bernabeu was hovering. The preening poltroon claimed that nobody in Manchester defended him after his lover’s tiff with Wayne Rooney in the Ruhr Valley. This was of course total tosh. United could not possibly have been more defensive of Ronaldo, from staff to the fans we all put club before country and stuck two fingers up to everyone else, as we so often do.

Still in amongst a glut of goals and trophies over the next 2 years this was all forgotten and the relationship was saved. It wasn’t long before Real Madrid were back again though and when Ferguson and the Gilluminati told them to bugger off a second time Ronaldo once again proffered his best impression of a spoilt brat on My Super Sweet 16 who didn’t get the right supercar for her birthday. He happily and very publicly concurred with the views of “Teflon Don” Sepp Blatter that United telling him to see out his £6.2 million a year contract was tantamount to slavery.

Yes because we all know how the Israelites in Ancient Egypt and Africans on plantations struggled by on such meagre salaries equating to several million pound sterling a year.

Nonetheless while he stayed one more year and played perfectly well there was no doubt about his change in demeanour. More histrionics, more time on the ground whining at referees for not punishing the light breeze on his shins or not celebrating when a teammate scored. The man had his fill of us lot here in Manchester and was quite happy to head to Madrid and the club he always dreamed of playing for.

The fact he is even better now than when he left still does not persuade THIS United fan to want him back. The demanding, strutting presence who demands everybody bows to his demands will wear thing when his legs start to slow, as he is now the wrong side of 30 with ongoing knee issues. Such a personality will likely hinder rather than help the development of a very talented young group of players Van Gaal is putting together.

Yes, Ronaldo is a paragon of professional excellence but he is only really about “The Brand.” CR7. Better than Messi (which he definitely isn’t). For a team scrambling to get back to winning trophies, such a megalomaniacal level of selfishness is something we can do without.

Some of you may construe such criticisms of the man as jealously. It is not. The second of the two moments in his film I referred to is this particular quote “Most of the time I am alone.” Of course he is. Money helps but it doesn’t buy you true companionship and understanding that Ronaldo seems to long for. The irony is that the only man who gets him is probably the one he is so utterly obsessed with conquering and consigning to a historical footnote. Messi, the true best player in the world.

Such an overwhelming fixation is something Van Gaal and Woodward would do well to avoid.

3 responses to “Not everyone wants Ronaldo back”