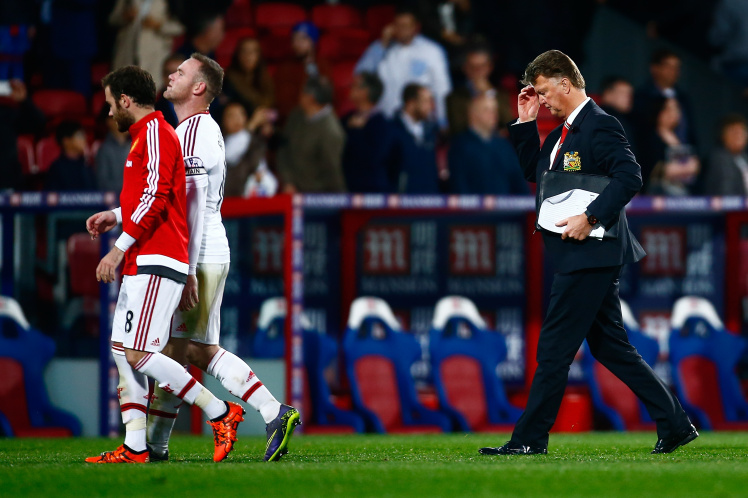 A new chant is developing among increasingly disgruntled United supporters. A chant that is impassioned and real, a succinct message (almost a beg) that cannot be expressed in any clearer form:

‘We’re Man United, we want to attack!’ was the call from United fans bellowing at the top of their voices in typically rambunctious away-day fashion at the weekend. Stooping to such measures has not been seen since, well, M***s.

When Louis Van Gaal walked through the Old Trafford doors the odds of having to spell out our not-too-much-to-ask desire would have been remote at best. This was a manager whose CV sat proudly in the upper echelons of managerial greatness. A man to relish; not be burdened by the Herculean task of resuscitating United’s ailing fortunes. A man who walked into jobs with success assured. A man whose arrogance/ confidence in his ability was truly fitting of the United DNA.

Van Gaal was tasked with the mantra of steadying the rocking ship, with an instant return to Champions League football of paramount importance . His first season was a means to an end- The Dutchman achieved the ultimate first season goal through his functional ‘philosophy’, with Marouane Fellaini and Ashley Young the telling beneficiaries from such functionality — arguably saving their United careers.

This summer there was off-season optimism with the sun on our backs, well for a week or so. Van Gaal had provided the perfect platform and springboard to bigger and better things — a title challenge and a run in Europe was now the vision set out by many a United supporter.

There were obvious causes for optimism too: Van Gaal had, on the whole, recruited well — securing two of the world’s hottest properties in Memphis and Anthony Martial and a proven winner and big game player in Bastian Schweinsteiger. The Dutchman showed his ruthless streak by getting rid of the remaining deadwood, as the squad became more streamlined. The biggest feather in his cap was retaining the services of the one jewel in the United crown and tying down David de Gea to a new long-term (debatable) contract. Anything looked possible as August closed.

The United fans were largely understanding of the situation last season — this side needed time to gel and predominantly substance had to prevail over style to grind out results. At times it was not pretty at all, but United fans craved the spine tingling Champions League theme and were willing to put up with non-aesthetically pleasing football if it meant achieving the pre-season objective.

With the new recruits giving a more balanced look to the side, many a fan expected Van Gaal to release the shackles and err away from the possession centered philosophy. United fans have seldom got on the edge of their seats this campaign though, despite Van Gaal’s insistence that United are indeed making progress.

Just a look at the names on the United team-sheet these days. The likes of Mata, Herrera, Rooney, Martial, Memphis — these are not ordinary players who should be bogged down by dull football.  Just how long is it before serious questions are asked about the continued lack of enterprising play with the personnel available?

It is easy to merely pinpoint the last three domestic games, all goalless, as a simplistic conclusion that the ‘philosophy’ is not working. To elaborate, the amount of dropped points against weaker opposition (Newcastle at home and Palace away — games we won last season) is what will probably prove to be our downfall again as far as a title challenge is concerned. Possession and dominating games based on statistics on paper is fine, but United fans want risk, pace, putting the ball in the box, having efforts on goal, committing bodies forward. In short, they want the ‘United’ way.

Our biggest threat is being nullified down the left, teams are now recognising the Martial threat and are doubling up accordingly, whereas our waning captain continues his malaise up front and the manager is reticent to recognise he has a major problem on his hands up front.

Martial and Rooney combined at their best at St.Mary’s — with Martial leading the line, where his pace can be utilised to its most devastating effect, with Rooney slightly withdrawn in the No.10 position. Martial stretches defences, enabling the likes of Rooney and Mata to be more influential with more greenery to work with. We have become easy to play against. Teams sit off allowing us sterile possession at our leisure. Once it eventually goes into the front, teams then squeeze up Rooney to the halfway line with his back to goal — something which teams could not even afford to contemplate if Martial was leading the line.

Rooney would almost certainly get more joy deeper and Martial would be a much more potent weapon were he used where he has reaped the most rewards already this campaign. It is anyone’s guess why Van Gaal decided to alter a perfectly functioning setup. We were starting to scare teams, Memphis and Martial were being allowed to terrorise defences with their pace and unpredictability – they were exciting to watch – they were everything that encapsulates the United way – direct, raw but exciting. Now Memphis is out of favour and Martial is being stifled. Those ‘captain’s privileges’ eh…

Van Gaal arguably faces one of the biggest and most defining matches of his spell at Old Trafford to date on Tuesday. A win against CSKA Moscow is a must as qualification from the group stage of the Champions League is reaching that make or break stage, but also to dispel some of the doubts of increasingly agitated United fans- who are longing for the next goal, let alone a consistent run of victories.

After all the money spent, United still look well short of claiming that 21st title, despite only being a matter of points off top spot. This piece is not a spitting cobra directed in Louis Van Gaal’s path, we just want to see the real United, a United that has a go, that takes the game to the opposition. We don’t want to see a United that is well organised and difficult to break down — Van Gaal’s predecessor made that his noose to hang from.

As the chant goes, ‘we’re Man United, we want to attack!’