Well, you look so pretty in it
Honey, can I jump on it sometime ?
Yes, I just wanna see
If it’s really that expensive kind
You know it balances on your head
Just like a mattress balances
On a bottle of wine
Your brand new leopard-skin pill-box hat.

Alright, I should probably confess I’ve lured some of you here on false pretenses. When I mention Royals in the headline I’m not referring to the House of Windsor. To the best of my knowledge the Princes William and Harry haven’t performed any renowned deeds of late and Charles certainly hasn’t. Kate has been the ideal model for the modern mum who seamlessly combines parenting with a career. That isn’t especially heroic though. I mean the servants make it much easier. And the Queen is just too conservative to make a bold fashion statement by channeling Bob Dylan.

No, the Royals to which I’m referring reside in a place called Kauffman Stadium rather than Buckingham Palace and instead of polo or croquet they play a quaint American derivation of rounders known as baseball. Think of it like Twenty20: a cookie cutter version of cricket under a deadline. Kauffman Stadium is located in the American Midwest city of Kansas City, which through a cartographer’s error is situated largely in the state of Missouri, not bordering Kansas. Regardless, on Sunday night while most Brits slept the Royals were actually in New York City–which the cartographers did manage to correctly place in the state of New York–winning Game 5 of the World Series to claim the overreaching title of World Champions by taking the best-of-seven series over the host Mets four games to one.

The relevance, and therefore lesson to be learned by Louis van Gaal, lies in the manner in which the Royals won. To become champion one must qualify for Major League Baseball’s playoffs then win eleven games–twelve if the club has gained entry through the one-off wildcard game. World Series are predominantly won with dominant starting pitchers who earn victories by throwing at least five of the minimum nine innings and leaving with a lead which is then maintained by relievers coming in from the bullpen. In other words the starter shuts down the opposition’s hitters while his own batters stake him to a lead which eventually holds up. The astute among you will note this does not sound particularly like the approach the Dutchman has adopted at United. 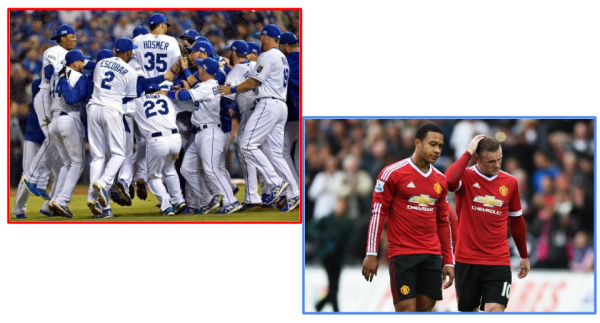 In a manner to which Van Gaal might (incorrectly) relate, the Royals turned the traditional method on its head. Their relievers won eight of the eleven games with Kansas City coming from behind in all of them. On its face their exploits do sound very much like LvG’s patient approach, only with the American club actually producing results at the end. Still, there’s a key difference.

In all fairness it should be mentioned, as in football, baseball purists champion a technically oriented style unsurprisingly called “the right way to play.” Kansas City is one of the few teams to play in this manner. They are not content to wait around for the home run. In fact their third, fourth, and fifth batters in the batting order, typically your power hitters, did not get an extra-base hit until extra innings of the deciding game, much as Wayne Rooney has not scored a goal in what seems like living memory. Their best home-run hitter, Kendrys Morales, was benched for the games in New York. The Mets are a National League team and in that league the pitchers bat rather than a designated hitter being employed in their stead. A defensive liability, Morales was therefore relegated to the bench, forcing the Royals to rely even further on ‘manufacturing’ runs through a communal effort than they would have in their own American League.

Unlike Van Gaal’s United however the Royals did not wait until the late innings to hit. From the outset they aggressively swung at strikes, giving no quarter, relentlessly applying pressure until the opponent’s pitchers were unable to handle its weight. They scored runs early in some games and not in others but inevitably wore down their opponents to put games away late. By comparison, Van Gaal’s United is content to merely hold the ball, too often passing back rather than pressing forward, until they themselves feel the pressure of time running out. 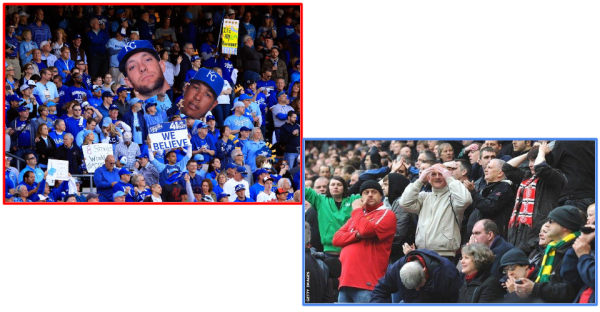 This is the lesson Van Gaal can take from the Royals after finally joining United fans to express “alarm” at the lack of scoring from his club. It is fine to score late rather than early so long as the effort to find the back of the net is consistent throughout the ninety. Put the pressure on the opponents from the off and maintain it. Don’t allow them to relax until the eightieth minute. The Royals would call that relying on the home run and, as United’s opponents are now doing, would lick their chops at the prospect of facing the Red Devils. The Dutchman always stresses the desire for his club to “play the right way.” Unfortunately, he’s lost sight of just what that means.