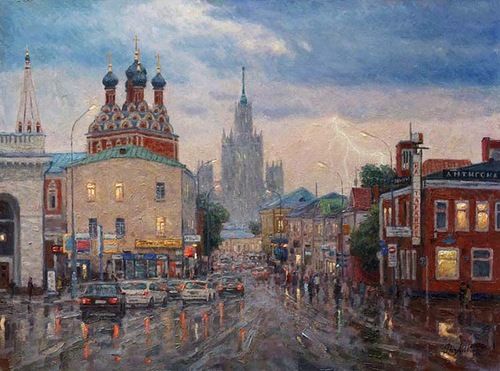 First off let me say that when it comes to my footy I’m a fan of HD, not impressionism. Unfortunately live streaming from Moscow to Fort Lauderdale tends to produce more of the latter. Five or ten seconds of action, then twenty to consider a still rendering, often with a player or two in blurred stop action. Art appreciation is not my thing. At least the action picked up where it left off in most cases.

Naturally the exceptions are critical moments in the match. I still haven’t seen the ‘alleged’ handball which resulted in the early goal for CSKA and I remain thankful there were three replays of Anthony Martial’s brilliantly headed equalizer so I could enjoy one fluid shot of the play. Why the action freezes for long stretches of play but the entire half time show comes through perfectly–albeit behind a bank of transparent ads for Russian bookies–is beyond me.

Why was I watching the Russian feed? Because Fox’s transmission of the English broadcast, with the banal tones of Martin Tyler, was even more dreadful. There are worse things than listening to Tyler drone on over still photos of a football pitch though. As the match in Moscow concluded sooner than the tilt between City and Sevilla at the Etihad the Moscow coverage switched to Manchester to catch the end of the sky blues’ victory–damn you Kevin de Bruyne!– picking up one of those English broadcasters who likes to emphasize points by whispering. What is that? The Terry-Thomas school of broadcasting? This is football not golf for crissakes.

The most interesting features of the Russian half time presentation were the sartorial choices of the two commentators. The host sported a shall I say snugly fitting faux Italian jacket, woven from some synthetic fabric, over a wool sweater. But I swear the analyst, a cross between Leonard Nimoy and Eugene Levy, one upped him with a gleaming sharkskin jacket. I couldn’t understand a word the duo were saying yet, somehow, I couldn’t look away.

They may have been speculating CSKA could have used the goal scoring prowess of Russian Premier–President?–both?–does it matter?–Vladimir Putin. A week or so back the self-styled man’s man took a break from riding bare-chested and wrestling bears to skate in a benefit match between Kremlin politicos and former Russian NHL stars. Apparently the pros were briefed on proper protocol before the game because the weak-ankled Putin somehow managed seven goals against what seemed like cardboard cutouts rather than smooth-skating hockey legends. Who says communism is dead?

Happily, enough of the CSKA match was streamed for me to gain some impressions of both Manchester United and their opponents. Not many of them were favorable.

For their part CSKA seemed to have taken a page from the Arsenal manual on how to make United look like rank amateurs. Allowing the visitors the ball they formed a beachhead a few yards outside the eighteen, sliding central players to whichever flank the Reds chose to explore. Faced with two or three defenders in their face when they received the ball Martial and Antonio Valencia had little joy. Passing up the middle was just as futile with Muscovites stepping up to intercept almost every such movement. Luckily their number 10, Alan Dzagoev, is no Mesut Özil nor are his partners in crime named Sanchez, Cazorla, and Walcott.

One of the major reasons for United’s lack of success was soggy passing. Balls were taking too long to reach their intended targets permitting CSKA to disrupt every first half attack. Maybe I’m being harsh considering the cold and wind of the early Moscow winter but when you’re being paid a yearly salary on a weekly basis you should kick the ball whatever the conditions.

As well the passivity of United’s movement was alarming. The screen showed LvG instructing a parka-clad Marouane Fellaini at the half-time whistle, which was a relief to me. Bastian Schweinsteiger may have been one of the best midfielders of his generation but time has been called on that era. Unable to get through 90 minutes on patchwork legs and too frequently a defensive liability for his new club when he is on the pitch it’s become obvious that in purchasing Schweini from Bayern Munich Louis van Gaal took a delicate problem off Karl-Heinz Rummenigge’s hands. The Dutchman didn’t just kick the tires but bought a £15 million lemon.

Fellaini’s performance as playmaker in the second half was an improvement. Passing became crisper all ’round the pitch as well. Still Van Gaal’s patient system of connect the dots is a welcome sight for teams with solid defenders who know how to park a bus. I still say the club needs to find a central player capable of looting and pillaging runs to offer a different dimension in attack and make opponents pay for cheating towards the wings. Playing keepy-uppy as the clock runs down with the club still looking up from the bottom of the group is less patient play than a lack of options and/or urgency.

Something about being given a regular starting role plays with the minds of United’s two new left side attackers. In his first start on the wing against Everton Martial passed early before taking in defenders who had to give him a bit of space in order to react to those passes. Against CSKA he did a credible imitation of Memphis, dribbling at any and every obstacle from the outset with predictable results. At least the Dutch sensation came out of Van Gaal’s doghouse with an adjusted attitude. It was his through ball which led to Antonio Valencia’s assist for the equalizer.

Van Gaal also gave a surprise start to Jesse Lingard. The youngster played down the right side for most of the match, the performance suggesting he is a poor man’s Theo Walcott. As with the Arsenal star’s early career Lingard is all speed with very little knowledge of what to do with the ball when he has it. Turning then racing straight into the photographers rather than laying off or working the touchline during one first half play was the perfect example.

The speedster would have been better served to cut his teeth in a Cup match rather than in the cold crucible of a Moscow Champions League affair. Too much was on the line and Juan Mata might have offered a better chance to dent the CSKA bus. Speaking with MEN Van Gaal suggested he was saving the Spaniard for the weekend clash with City. The notion may seem reasonable but it also reveals the manager’s priorities. Crashing out of Europe is fine as long as the club stays within shouting distance of a league title. Apparently LvG’s United is a poor man’s Arsenal.

Everyone will see whether the rest pays off for Mata against top of the table City on Sunday. Me, I just want to see the match without having to attend an exhibit at the Guggenheim.