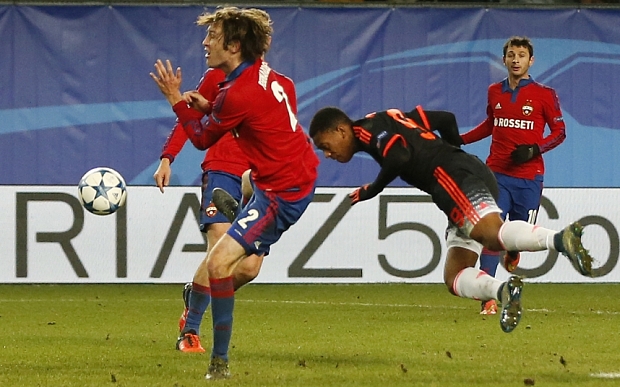 An incredibly long trip across Europe, kick-off late into the night, and 90 minutes in the freezing cold. I cannot express how important it is to win all your games at home in the Champions League because it is quite difficult to do so on the road when you’re travelling to the likes of Eindhoven, Wolfsburg, and Moscow.

The manager also needs to keep an eye on upcoming league fixtures to be certain his key players aren’t fatigued. Manchester City, having beaten Sevilla 2-1 at the Etihad, are next for United. The same amount of days between games but no travelling to endure.

Here are four observations from Manchester United’s trip to Moscow.

CSKA are nothing special

While an important point for United the home side were far from convincing. I would go as far as to saying they’re a dismal side with two or possibly three noteworthy players, happy to sit back and allow United possession. Playing on the counter, they only scored through a penalty rebound. Phil Jones reacted slowly to David de Gea’s save and the Russians were ahead.

The second half was better from a United perspective but still lacked a degree of urgency. A goal was there for the taking but LvG’s boys failed to show attacking direction at times (858 passes, little end product). That must be addressed when CSKA come to Manchester.

A waste of money they said. Anthony Martial is making the doubters eat their words. In an interview with Stretty News TV French journalist Philippe Auclair told us the one aspect to his game which needs improving is heading. On the basis of his equaliser tonight one might think the teen’s ears were burning–lunging to bounce a header off the post past a helpless Igor Akinfeev.

Martial had a difficult first half, both unable to get the better of Brazilian right-back Mario Figueira Fernandes and at fault for the handball which saw CSKA awarded a penalty. Unlike other players his age maturity shined through. He never quite dropped his head. Louis van Gaal may not get the credit due so soon but he has scouted an absolute gem in this young French striker.

It is incredible he continues to start despite being consistently poor. Okay it wasn’t exactly his fault United didn’t create enough opportunities in front of goal but, as is becoming alarmingly frequent, his first touch too often resembled a pinball machine.

We played football with Marouane Fellaini on the pitch!

No United did not result to hoof ball tactics following the introduction of Fellaini (replacing Bastian Schweinsteiger at half time). An attempt to play football, although often laterally, was easier on the eye than seeing the opposition’s defense have a field day heading balls away over and over again. Still, United passed the ball repeatedly across CSKA’s bow but rarely found a breakthrough. After the equaliser, three points were there for the taking. Especially as they remain bottom of the group you can’t help coming away disappointed with the result.