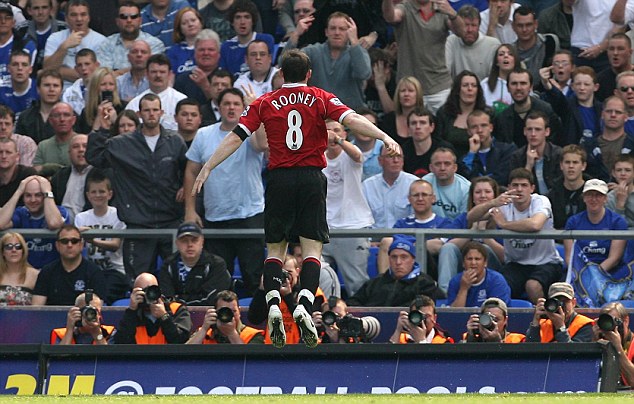 “White Line Fever”: The radical change in a person’s behaviour when they start playing sports, AKA stepping over the ‘white line’. The radical change can result in a normally mild mannered individual, becoming aggressive extremely competitive and maybe even violent during game-play, once the game is over they go back to their usual mild mannered self.

This was an attribute or quality (dependent on your definition of the so-called ‘beautiful game’) that Wayne Rooney had in abundance, which long predates accepting the responsibility of leading Manchester United in the Louis van Gaal era.

The Wayne Rooney that at times was frankly unplayable would tear around the pitch, in street footballer fashion, never accepting losing the ball and put in a full-blooded tackle for the cause. Sometimes playing on the borderline reckless would have detrimental consequences: the momentary losing of his head and blowing of that hot-headed fuse would see him have his fair share of flash points and run-ins with the officials.

That Wayne Rooney was putting in performances of the highest calibre, even if it meant he had to sit out a few games through being a victim of his own impetuosity. Even though he was no use to the cause sitting in the stands, you were virtually guaranteed a Rooney chomping at the bit, determined to contribute and redeem himself after a misdemeanour.

Saturday’s venue could be just the perfect arena to start his fight back.

Rooney used to be on the receiving end of some serious vermin and bile from very unforgiving Evertonians, who found his transfer to United unfathomable after that ‘once a blue, always a blue’ scrawled on a sweaty vest. They wasted no time in directing their anger towards Rooney whenever he stepped out back onto the turf where he was idolised, and that was actually to Rooney’s advantage.

It fired him up. One of Rooney’s more memorable performances at Goodison in red was masterminding a second half comeback from 2-0 down to claim an arguably title-winning display, Rooney scored the ultimately decisive third goal. He charged to the jubilant United faithful, kissing the badge against his boyhood club.

Did he look back in hindsight and think he crossed some sort of line? Did the Everton fans realise that creating a cauldron of venom in Rooney’s direction actually brought the best out of him?

As time as gone on the Everton fans, like Rooney’s evolution in a United shirt, have mellowed in the knowledge that a quiet Rooney is of little effect, and as such Rooney’s performances at Goodison Park have gradually deteriorated. This was emphasised in last spring’s limp showing on Merseyside where Rooney was, to put it kindly, a bystander as Everton cruised to a comprehensive and deserved 3-0 victory.

Another performance of that nature, after a virtual no-show at the Emirates before the international break, from the man supposed to be leading from the front will do little to silence the skeptics and cynics attempting to revel in the piecemeal decline of one of England’s premier players.

Can a player really be inhibited by an armband wrapped around his bicep? Has he lost that ability to put his freshly publicised happy, family life to one side and play with fire in his belly as a Scouse street footballer should?

It is time for Rooney to rediscover that lost white line fever on his old stomping ground and get United back to winning ways. Rooney has now gone 17 games away from home without finding the net, a staggering and wholly unacceptable return for the captain of his club and country.

Will the real, angry Wayne Rooney please stand up?

Also worth a read from Stretty News today: Rooney’s on the wane…