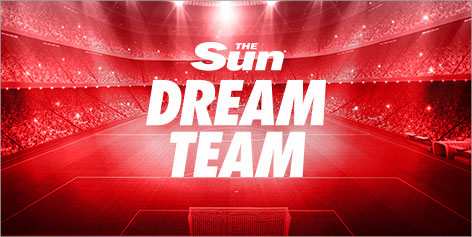 A weekly game on The Sun’s Dream Team website grants you the opportunity to enjoy the football calendar more with likeminded friends.

There is £30,000 to win this week, so it really is worth entering. Think of all the games, home and away, you could attend with that in your back pocket. Beers and pies galore.

The concept is as follows: you, the user, select eleven players each week in hope of clocking up more points than your counterparts.

This week I have gone for the following team in a 4-3-3 formation. United face Everton at Goodison Park and I’ve selected players from both clubs.

City welcome Bournemouth to the Etihad and despite how much I would enjoy seeing the Premier League newcomers provide a shock result, it’s not happening. The blues have dropped a few points lately and they will be hoping to drive on again with United lurking behind the horizon.

Joe Hart is in form and as far as The Sun’s Dream Team is concerned, he’s been the best goalkeeper in the league so far this season. That would be David de Gea if it wasn’t for Sergio Romero being an inconvenience.

Again, I don’t see any hope for Bournemouth. This is a must win for City as anything can happen when they face United the following week. Vincent Kompany has shown glimpses of his good old best this season and there’s always a good chance he will get his name on the scoresheet from an in-swinging corner.

The Lilywhites entertain Liverpool at White Heart Lane in what will be Jurgen Klopp’s first game as boss of the scousers. I’m not quite sure what to expect from the German in the first few months but he’s a manager I rate highly. Unless he changes their zonal marking approach to defending corners, as seen under Brendan Rodgers, the likes of Jan Vertonghen may have a field day.

Everton host Manchester United after what has been a reasonably good start for both clubs concerned. Prior to the recent international break, Phil Jagielka put in a stunning display against Liverpool and is one always capable of scoring.

The last time I selected Matteo Darmian he had his worst performance yet in a Manchester United shirt. Arsenal’s Alexis Sanchez ran riot against the Italian but every footballer has an off day, right? Whether he’s played on the right or left against Everton on Saturday, Darmian will come back stronger and may even provide an assist or two…

I wouldn’t read to much into the Arsenal game. United cannot let that happen again this season. It will soon click – maybe on Saturday – and pretty much everything goes through Juan Mata.

Impressive as ever on international duty, Ross Barkley is usually very good against bigger opposition. If he keeps this good form up I’m unsure whether Everton will be able to keep hold of him.

I was reporting at the Aviva Stadium when Ireland beat over Germany during the international break and Wes Hoolahan really stood out for me. So far this season he has 1 goal and 5 assists for Norwich, who are up against Newcastle on Sunday.

He’s just brilliant, isn’t he? Alexis Sanchez always wants more and never gives up. I fancy him scoring most, if not all weekends.

There’s a lot being made of Harry Kane’s lack of goalscoring this season but he showed up against City and will kick into gear at some point. That could be this weekend but it depends on how Klopp sets his new side up defensively.

Showcasing a man of the match performance while away with France last week, Anthony Martial has been a brilliant signing for Louis van Gaal. He hasn’t scored in his last two United appearances (Wolfsburg & Arsenal) but will find himself on the scoresheet again very soon.

Feel free to join the Stretty News mini-league by using the following pin to enter: 3089187. I’ll race you to the very top and Kevin Keegan style ‘love it’ when you slip. A reference to Steven Gerrard too? Oh well.