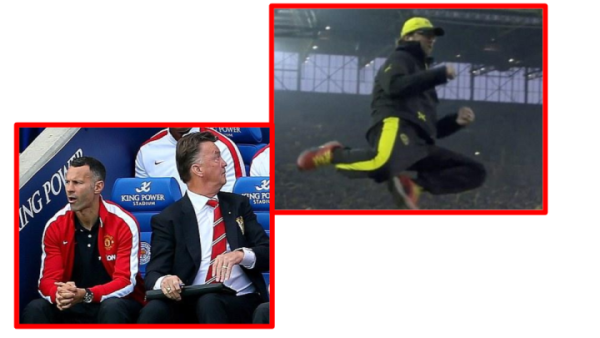 The international break finally over, United invade Goodison Park tomorrow. One would hope they will take Arsenal’s cue, bringing a highly charged intensity and determination with them after a disappointing performance in their last outing. They will need that steel to produce a result. Everton are a dangerous side. Their manager Roberto Martinez is equal parts genuine courtesy and dangerous imagination.

There was a time, when Sir Alex Ferguson announced his retirement, the Spaniard was among the favorites to take the reins at Old Trafford. That might have been fun. He certainly wouldn’t have brought the reluctance and hesitancy David Moyes exhibited while under fire at post-match pressers. With a massive budget and his pick of players Martinez might have transferred his cup success into consistency in league play, something he hasn’t been able to manage with the Toffees. Again though, I’m sure his United sides would have been entertaining to watch.

That sense of fun has now spread across Stanley Park to Anfield where Jürgen Klopp promises to put the “let’s play” in the Kop. I have to admit a distinct jealousy for the class and enthusiasm of football management now present on Merseyside having tolerated Louis van Gaal’s often surly arrogance for the past year plus. Once upon a time Van Gaal was known for fiery sideline antics and Chuck Norris imitations along the touchline. Nowadays however he sits in his seat glowering like a sadistic headmaster whose wife will thrash him within an inch of his life should his schoolboys not produce all three points. How can ye have any pudding if you don’t beat your foe? Klopp, on the other hand, seems incapable of sitting down, rather being perpetually on the verge of taking flight. How can you not wish he was on your side?

You can see why he took the Liverpool job. The post is similar to Borussia Dortmund though simultaneously lacking the same pitfalls and presenting far greater challenges. The Kop’s new smiling madman was able to temporarily break Bayern Munich’s hold on the Bundesliga but the response was a systematically fatal raid on his best players. If you can’t beat him sign his stars. Not being a one-team competition, that particular hazard doesn’t exist in the Prem. The top clubs rarely exchange players–put your hands down Juan Mata and Robin van Persie. You too Mr Tevez. Raheem Sterling has gone from ‘Pool to City but that is different. At the moment the Reds are not a top side. If their new boss is to restore them to that status he will have to go through more than one club. Being able to retain his most precious resources while mounting an assault on City, United, Chelsea, and Arsenal must have been appealing to a man with a warrior’s fire in his heart and the gleam of a pirate in his eye.

If you know something of his new owner’s operations on both sides of the Atlantic you can also see why FSG hired the German. Personally I don’t think it was because Carlo Ancelotti declined the opportunity. The Italian is a facilitator more capable than anyone of drawing the best from a collection of egotistical individuals. That is why he did so well in successive spells at Chelsea, PSG, and Real Madrid. With the departure of Steven Gerrard Liverpool has no established stars, only emerging ones, and shepherding young talent is most certainly Klopp’s bailiwick.

Furthermore Liverpool has been struggling with its identity since the negligent stewardship of Americans Tom Hicks and George Gillette. Previously, regardless of Sir Alex Ferguson’s mission to deny them another league title, they were a winning side despite a tragic history. Now, having fallen out of the top four, they are just tragic. John Henry’s Boston Red Sox are currently struggling with a similar identity crisis. After eighty-nine years of futility the Bosox “reversed the curse” of Babe Ruth to make seven post-season appearances and win three World Series titles with Henry writing the cheques. Their drastic decline in the past two seasons, however, has left them merely as losers. To change their image Henry hired a new club president. Dave Dombrowski had previously built the Florida (now Miami) Marlins into a two-time World Series Champion and the Detroit Tigers into three-time American League pennant winners. The ending of the curse brought a short-lived joy to Beantown the restoration of which demanded a professional winner. At Anfield the problem was more of an emotional one. Roy Hodgson and Brendan Rodgers both proved to be diligent workers but damp squibs. Without shunting the memory of Hillsborough and Heysel aside it was long past time to inject the Kop with a joyful energy. FSG is betting Klopp is the man to do that while also making the Reds a contender once more.

The first step in the process will take place at White Hart Lane in the early kick-off tomorrow. Being on the wrong side of an ocean will tragically cost me a Saturday morning sleep-in but I will be glued to the screen, eager to see whether Klopp can conjure an immediate response from his new charges. I’m willing to bet many of you will be as well.

6 responses to “Liverpool Fun? Is Armageddon Nigh?”