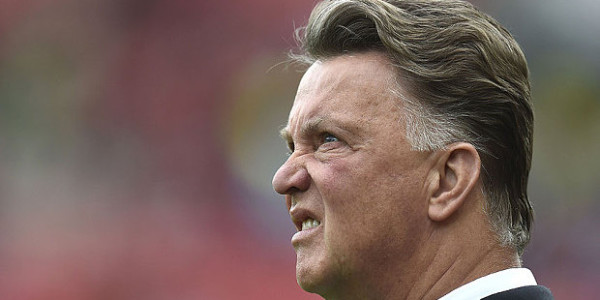 “And I don’t understand,what is your plan that you can’t be good to me?”–TTurner

When a new manager takes over a major club he typically does so under one of two mandates. Either he is there to win silverware immediately or to undertake a wholesale rebuild. Unless the club’s supporters have been sold a bill of goods Louis van Gaal came to Manchester United to accomplish the latter. The problem is some of his decisions don’t seem to be in line with your standard rebuild. Admittedly the Dutchman is one of the foremost tacticians in the game with a CV only rivaled by two or three others.

Personally I can’t even manage to cross the street safely so my questioning Van Gaal, to employ a bit of understatement, borders on the audacious. Then again I’m laid up with a broken leg and have nothing better to do. I might as well give it a go.

First, credit where it’s due. Despite media consensus that the club needed a strong centerback, with Mats Hummels and Sergio Ramos primary candidates in the off-season, van Gaal stuck with the unproven pairing of work-in-progress Chris Smalling and midfielder Daley Blind.

Smalling certainly has the size to be a presence in either box but he came into the season with a reputation for inconsistent decision making and lack of confidence on the ball. Yet those qualities are typical of any young defender, faults which can only be corrected by a heavy dose of pressure-filled minutes on the pitch. Central defense is a test of fire. Managers must have the good judgment and faith to allow a defender to mature. Smalling has emerged from the Premier League forge with a more hardened steel opposing forwards must respect. Having earned respect the player is gaining the confidence which allows for comfort in possession. Van Gaal made the right choice to place his confidence in the twenty-five-year-old.

Blind seemed a patchwork choice to partner with Smalling. He lacks size and is known more as a midfielder or fullback. He did play center back in his early Eredivisie days and not only reads the game well but has a wonderful sense of positioning. As well he can start the attack and pick out a pass with the best. The two players’ styles are complementary, one’s strengths offsetting the other’s weaknesses. Again credit to the manager for seeing their potential.

The duo still struggle against fluid, pacy attacks, as the match against Arsenal proved, but name a central pairing that doesn’t. When confronted with the likes of Alexis Sánchez, Mesut Özil, Santi Cazorla, Theo Walcott,  and Aaron Ramsey any tandem will hope the gaffer is going to place a hard-nosed midfielder in front of them to plug the gap. In the United squad the most qualified candidate is probably Marouane Fellaini. Belgium’s answer to the Chia pet made his name in the destroyer’s role for Everton although LvG seems to think he’s better suited to a bench role as an understudy to Wayne Rooney.

Rather than attempting to intimidate Arsene Wenger’s attackers Van Gaal started a pair of experienced (read as aging), weathered (read as hopelessly outpaced on their oft -injured legs), and cerebral (read as passive) midfielders in the hopes Michael Carrick and Bastian Schweinsteiger’s ability to control matches would cancel out the speed and technical ability of Sanchez, et al. Instead it was a lesson in what would really happen if Batman faced off against Superman.

If you think comparing the Gunners’ front five to the Man of Steel is a bit over the top I’ll refer you to the third installment of the New York derby which I remember watching back in the days when I thought jaywalking was no big deal. The August MLS tilt was dominated by the home standing Red Bulls who used their speed to carve out a comfortable 3-1 win.

The great socialist experiment that is American soccer does pay tribute to capitalism by allowing each club to massively overpay three players with no stipulation on whether they are being compensated for their talent, celebrity, or both. Until this season Red Bull’s resident bourgeois capitalist was Thierry Henry. Despite his recent performances for Sky Sport as a pundit he fell into the third category of Designated Player: game changer and marketable personality combined. After his retirement the club opted to create a fourth category for marquee signings–cheap American talent–snatching up RSC Anderlecht’s Sacha Kljestan (google him). The forty-six-time capped US International has been a solid addition but hardly impactful, leaving the name factor on the club to a pair of English siblings whose careers can, perhaps charitably, be described as mediocre. Given the high profile signings their new rivals procured in their debut season no fan of the game in their right mind would have anticipated a scoreline which read Wright-Phillips Bros 3-1 Lampard/Pirlo/Villa.

The moral of the story? When the legs go the football brain can’t compensate for the combination of speed and skill whatever the level of competition. Van Gaal had no business putting both Carrick and Schweinsteiger on the pitch at the Emirates.

A mistake in one game warrants criticism but not a crisis of confidence. Yet there is also the whole David de Gea saga to consider. For three years the young Spanish keeper has been the club’s most important player, his numerous reaction saves robbing opponents of goals and points in the table. At the outset of his United career de Gea suffered heated criticism as he adjusted to the intensity of Premier League competition. At no time did he express a desire to get out of the kitchen however. Rather he has been a textbook professional throughout his time at Old Trafford. So despite his admission he would prefer to play in his hometown, in light of the interest in his services expressed by Real Madrid, was there any reason for Louis van Gaal to show a complete lack of confidence in the player’s willingness to see out his contract first, especially as the manager was simultaneously exhibiting a surprising amount of faith in his unproven tandem in front of goal?

Benching his number one for the first six matches of the campaign, including key European matches, and replacing him with a last-minute signing completely unfamiliar with the back line was a huge risk both competitively and financially. One theory is the uncertainty surrounding Sergio Romero challenged Chris Smalling and Daley Blind to raise their respective games to more quickly forge a solid partnership. As man management goes such a ploy would be madness. Not only were millions on the line but the notion means ruining whatever slim chance remained to re-sign the netminder who may be the only rival Manuel Neuer has as the world’s best. Had Smalling and Blind not responded so well the result would have been a reinforcement of the mediocrity ushered in under David Moyes rather than a resurgence of confidence that briefly saw United return to the top of the table.

As matters stand De Gea is back in goal performing admirably and professionally as ever. Yet now there is no doubt he is merely biding his time. If his manager had no faith in him why would he have any in return? The Spaniard’s contract is up at season’s end. Surely his time in Manchester will be as well. When he goes where will Van Gaal find a suitable replacement? It won’t be Neuer and world-class keepers do not grow on trees. Losing De Gea will be a setback in the club’s rebuilding process.

Overhauling a roster is a long journey. Like any such trip it’s best to take the most direct route possible. Louis van Gaal seems to think there is time for side trips. Such adventures often end up leaving travelers lost and the Dutchman is the epitomy of the husband who refuses to stop to ask for directions. Unfortunately, should too many of his unexpected diversions backfire it’s United supporters rather than their proud manager who will end up sleeping on the couch.

As @Blessed_04 hinted on Twitter, I missed David de Gea’s decision to extend his contract for another four years. I was not living under a rock however. Rather it was heavy medication which kept me in an induced coma for a fortnight while I recovered from pneumonia that was preventing doctors from repairing my shattered leg after a hit and run. So I have a decent reason for being unaware of developments. Sadly, my editor has no such excuse for failing to clue me in before posting. Nevertheless I stand by my disapproval of LvG’s handling of his prize goalkeeper despite David de Gea’s incredibly generosity and forbearance in recommitting to United. I still don’t know what the gaffer was thinking.