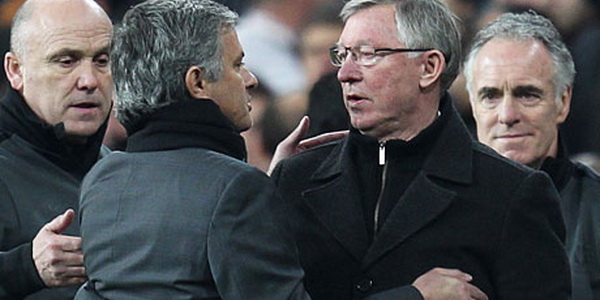 Jose Mourinho reveals he chatted with Sir Alex Ferguson leading up to Scot’s retirement, but he allegedly preferred the Chelsea job rather than the hot seat at Old Trafford.

However, a little birdie told me some time ago that what Mourinho is spouting is a fib and the Manchester United job is still one he eagerly craves.

Mourinho left Real Madrid under a grey cloud following an array of falling outs with key members of the dressing room. At Stamford Bridge we’re beginning to see the same as the current Premier League champions positioned 16th in the league.

Speaking to the BBC, the Portuguese manager elaborated on his preferred move to Chelsea…

“Every manager in the world looks at Man United as a huge club but I wanted to come to Chelsea.

“And we didn’t bring that to the table because we were so open and he [Fergie] knows so much about myself that he knew that for almost a season, I want to leave Real Madrid and I want to come to Chelsea.

“He told me a huge secret, not many people knew, like, one month or two months before the decision. I know that he trusts me, because if he doesn’t, he doesn’t tell me but I was scared.

“I was scared so when finally he informed the media about his decision it was a sense of relief.”

Hours before David Moyes was appointed Manchester United manager in 2013, a late attempt was made by David Gill, departing chief executive at the time, to approach Mourinho. Unfortunately it was too late and we appointed the worst possible fit for the role.

Ferguson and Gill, a duo that kept the ship afloat at Old Trafford, left around the same time and the club found it hard to cope. Ed Woodward was learning a new trade whereas Moyes was out of his depth.

Next season will be Louis van Gaal’s last unless he fancies extending his current contract. That also depends on whether the club believes the Dutchman has done enough to deserve added time with no silverware delivered as of yet.

I have no doubt in my mind that if Mourinho, who studied under van Gaal at Barcelona, was proposed a job at United he would take it with open arms. There will be competition from Pep Guardiola too, granted Manchester City don’t get there first.

Who would you like to see replace Louis van Gaal at Manchester United?