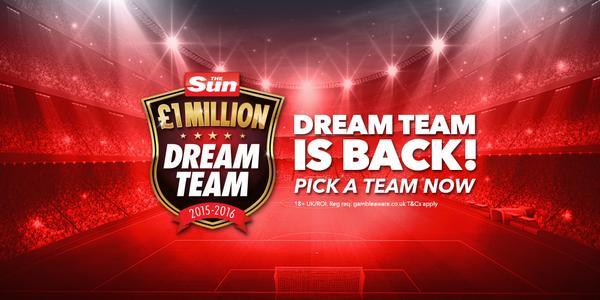 A new weekly game on The Sun’s Dream Team website grants you the opportunity to enjoy the football calendar more with likeminded friends.

There is £10,000 to win this week, so it really is worth entering. Think of all the games, home and away, you could attend with that in your back pocket. Beers and pies galore.

The concept is as follows: you, the user, select eleven players each week in hope of clocking up more points than your counterparts.

This week I have gone for the following team in a 4-3-3 formation. Even though United face Arsenal and there are easier fixtures to predict, four reds make my eleven.

I don’t think any of the top goalkeepers are safe this weekend with some tasty encounters, so I’m simply opting for Dave Saves, the best in the league. Neither Olivier Giroud or Theo Walcott should threaten Manchester United.

Can’t put a foot wrong this lad. Play him on the left or on the right and he’ll make bits of the opposing winger. Goals and assists are on the way.

My biggest tip is to select as many full-backs possible in your defence for The Sun’s weekly game. They’re obviously more likely to assist goals or maybe score one themselves. Blind, who will feature at centre back for United against Arsenal, is one of two exceptions this week. I fancy the Dutchman to pop up with another important goal for the reds.

This is a full-back I happen to rate highly. He often goes under the radar but is regularly part of West Ham United’s build-up play and is no pushover defensively. The Hammers have been impressive on the road this season and I expect them to take three points from the Stadium of Light.

Have you seen this go jump? Not the tallest centre half but he’s like a leaping salmon in the air. Otamendi is one to watch on corners this season.

This Spaniard has scored and assisted 45% of United’s goals season and I don’t see that statistic ending just yet. Adjusting to life on the right as opposed to his familiar no. 10 role, Mata is finally giving United fans something to sign about following his costly transfer from Chelsea.

I always fancy Everton to give it to Liverpool when both Merseyside clubs meet and this attack-minded midfielder has a tendency to show up on the big occasion. If Barkley can be unleashed, Brendan Rodgers may need a blanket to hide under.

This Belgian is the type of player you expect something magic from whenever the ball is at his feet. City with De Bruyne in their side should provide Newcastle with problem after problem, unlike Chelsea the last day out.

Grant him half a chance and you’re in trouble. Southampton have not had the best start to the season and this weekend they face a crumbling Chelsea side. That defence is leaking too many soft goals and Pelle will take advantage of that.

When he’s not busy sulking, Berahino is a threat whenever West Brom go. It’s a trip to Crystal Palace on Saturday for the Baggies and it would be a wise prediction to call both sides to score.

Just brilliant, isn’t he? Even though he failed to score against Wolfsburg midweek it was arguably his best performance yet for United. Runs fearlessly at defenders, happy to play with his back to goal and capable of beautiful finesse shots.

Feel free to join the Stretty News mini-league by using the following pin to enter: 3089187. I’ll race you to the very top and Kevin Keegan style ‘love it’ when you slip. A reference to Steven Gerrard too? Oh well.