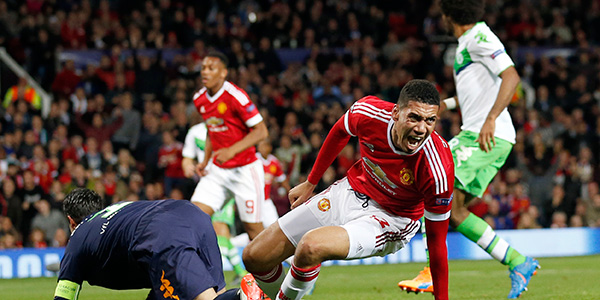 I’m back writing again in full flow after a few difficult weeks away from the keyboard. United have been doing reasonably well with blatant improvements from last season. The upcoming month has some testing fixtures but Louis van Gaal’s record against top sides is impressive.

Last night’s win over Bundesliga opposition Wolfsburg was deserved but we were lucky not to concede at the end – if that makes any sense? The way in which the lads reacted to Daniel Caligiuri’s opener in the third minute mind bodes well; operating as an organised unit and not falling for the same mistake many Premier League clubs do in Europe by resulting to a free-for-all gung-ho approach.

Right, okay, it wasn’t the best performance I’ve seen as it hardly resembled the vintage United we all miss and want to see but this is the van Gaal way.

Chris Smalling and Matteo Darmian – played as a left back for the second consecutive match – did superbly in defence. They stood out for the right reasons whereas Antonio Valencia, at fault for the early goal, was replaced by Ashley Young during the interval.

Ever since that sending off versus City last season, Smalling has come on leaps and bounds. Daley Blind has received lots of praise but I don’t think that would be the case without the England international at his side.

Sticking to the positives it was up there with the best displays I have seen from Juan Mata in a red shirt. Listening to Roy Keane analyse the game at full time, I couldn’t agree more with this assessment of lil Juan playing in the correct position – not the no. 10 role so many fans crave.

In a system that often works in parallels we’re seeing the best of the Spaniard out wide on the right. Throw Mata into the centre and I fear he would become a disappearing act.

That brings us on to Wayne Rooney who if you’re going to call a spade a spade, has been woeful. This morning I have seen every excuse pulled from thin air to explain his bad form and one even went totally Nigel Farage by blaming Anthony Martial’s grasp of the English language.

It’s time we all cut the shit and look at things as they are. The manager introduced Andreas Pereira, familiar to the no. 10 role, and stuck him on the left in exchange for Memphis Depay. Little was going Rooney’s way so the decision not to substitute ‘our captain’ puzzled me a bit.

If any other player was in Rooney’s current form Rooney they would be immeditely dropped. No ifs, buts or maybes. No footballer should simply walk into a team but that is happening at United – the last club you’d expect such bollocks from.

The scoresheet for United consisted of Mata from the spot and Smalling, who received an outstanding assist from our Spanish magician. It topped off the win nicely and should put all concerned in form to stuff Arsenal on Sunday. Fingers crossed that clown drops his best goalkeeper again. *Brain fart alert*

Anyway, to end our account on last night’s 2-1 win over Wolfsburg, it was a huge relief to collect three points in a group that now appears extremely tight. I’m confident that United will reach the last 16 of the Champions League and possibly beyond.

P.S. I forgot to mention the referee and how he modelled an uncanny resemblance to a bag of shit.