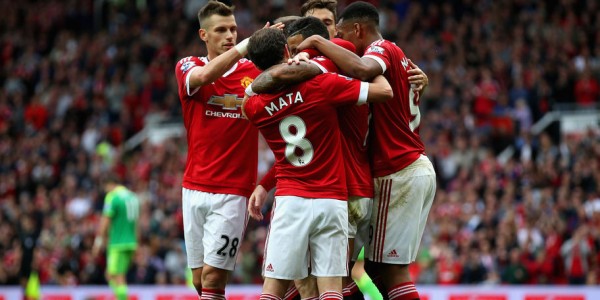 Some may say we were spoiled, some may say blessed as we got accustomed over the years to the phrase ‘Manchester United lead the way in the Premier League’. We probably took it for granted. Not anymore though. United are top of the pile for the first time since Moyes’ opening day victory and it feels fantastic! Those were as dizzy as the heights got for him. Now, for the first time, Louis Van Gaal is in charge of the team everyone is looking up to now, hopefully it is just the start of things to come.

United are still offering up a Jekyll and Hyde-esque concoction between the pedestrian and the old, vintage swashbuckle yet here they sit top of the tree and there to be shot at. Whilst the build-up can still infuriate and render the expectant match-going fan restless, the ability to be able to go up a gear and offer up a semblance of the old United way, as we saw once the deadlock was finally broken on Saturday, is definitely a good sign going forward.

Sunderland, as you’d expect from a side shipping goals and bottom of the league, came intent on being resolute and solid and they made it difficult for United in the first half, that twinned with United not playing with the intensity and speed needed to unlock a wall of ten behind the ball.

They contributed to their own demise, their incessant time wasting costing them with Memphis scoring in the final minute of four added first-half minutes. It was a big goal, up to that point it had that Newcastle feel about proceedings. Sunderland had to come out after the break, making United’s job easier- we could dictate terms and go through the gears as the game naturally opened up.

It was particularly satisfying to see the names of Memphis and Rooney back on the score-sheet in the Premier League. Attackers are brittle commodities and Memphis and Rooney are two players who need confidence to perform at their maximum. Memphis’ first Premier League goal and the end of Rooney’s barren run in front of goal will hopefully act as a springboard to featuring more regularly on the score-sheet.

Fans and pundits alike have criticised the philosophy for its lack of purpose at times. Rightly so, too: Fans who have been fed on a double decade diet of free-flowing, risk taking, win at all costs football have taken a while to get acclimatised to this more methodical and mechanical approach under Van Gaal. You get the impression that people are starting to see the benefits of this almost footballing education under Van Gaal and are giving the philosophy their backing at long last.

There had been a lot of disgruntlement that such meticulous attention to detail and stubbornness to not deter from the philosophy had seemingly left the players inhibited, stifled by shackles that players who want licence for freedom do not take to with any particular gusto.

That could seemingly not be any further from the present reality- with 3 goals notched against Southampton, Ipswich and Sunderland in consecutive games. In the second half in particular, there were no signs of chains around ankles with youngsters Anthony Martial, who ironically had his best game for the club without troubling the scorers, and Memphis playing with a fearless freedom that has endeared many a youngster making the grade at Old Trafford to the United faithful.

That is what playing for and watching United is all about, isn’t it?

Although seldom tested defensively on Saturday, Chris Smalling continued his terrific form and Daley Blind put in another top performance, another shot at the doubters who question his nous and ability to hack it in the centre. For the second successive game, Blind’s passing ability from the back unlocked a defence to open the scoring, after providing for Rooney in sumptuous style against Ipswich in midweek. His vision from the back and reading of the game from the back compensates for a supposed lack of presence. Pace in the mind is the most fundamental attribute a footballer can boast, just ask Scholesy. Blind is an intelligent footballer and the Smalling-Blind axis continues to blossom.

It will have to as well to give United the best chance to come out of the next three fixtures still in a position to offer a challenge this season. Successive away trips to Arsenal and Everton and the derby at OT is as stern an acid test as they come in assessing just how much we could achieve this campaign. If we emerge from those away games unbeaten ahead of the derby, we will have put ourselves in a decent position to continue this promising start.

Ahead of those games comes under crunch match in the Champions League. Defeat on the opening day has left the clash against Wolfsburg at Old Trafford as a must-win already. They utilised the vast fortunes incoming from the Kevin De Bruyne sale with the purchase of Julian Draxler, who comes with big wraps. However, this is a Wolfsburg side dismantled in a 9 minute burst from Robert Lewandowski, scoring an incredible five times in that time. That tells you that United should get opportunities during the game to put right the wrongs of that horror night in Eindhoven.

European nights under the Old Trafford lights are like no other, with home advantage and the need to win- it should be some occasion and we need to do our bit as well as the players on the field to get back on track with maximum points.

The confidence boost of sitting on top of the tree domestically should spur us on. Enjoy the moment, reds!