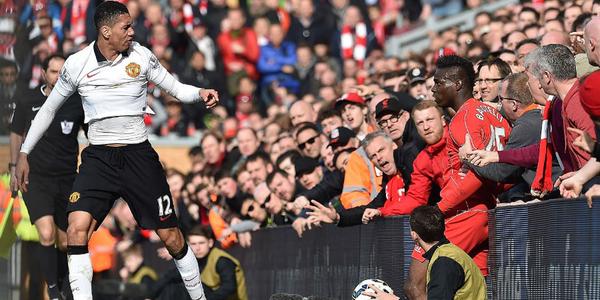 If Mock The Week were deliberating over an ‘unlikely things to see as a headline’ round in November 2014, in the immediate aftermath of Manchester United’s humbling away defeat in the derby, the above headline would surely be in with a shout of making the cut.

I’m sure you won’t need reminding of the callous misdemeanours that were on display that day by ‘Mike’ Smalling, but just to give you all context and to embellish his recovery from the ashes that dark day, I will remind you: Smalling was dismissed from the field in the most unbelievably amateurish circumstances imaginable- when the message being drilled into the players by Van Gaal pre-game was for cool heads in the derby cauldron.

He attempted to block a Joe Hart release up the field for his first yellow, the second yellow was a brainless lunge on James Milner out wide, who was not exactly in a position of danger. Smalling did not heed the manager’s pre-game plea for composure and was subject of many a venomous tirade from angry supporters- who felt that we would have not succumbed to that 1-0 defeat had Smalling remained on the field, myself included.

You cannot see this, but I’ve just finished the serving of humble pie that has been cooling in the fridge for 10 months after that incident. Never have I ever been more satisfied to hold my hands up. I wondered if we would ever see the Chris Smalling that Sir Alex Ferguson obviously saw and, to be brutally honest, was indifferent to him continuing in our back-line after those two moments that had Sunday league players chortle and go, ‘yep, been there’.

Allow me to take you back to my first ever rambling for Stretty News, so pent up with rage that day that I decided I had to vent my spleen to you guys on a more regular basis, you have Chris Smalling to thank for that, readers! Here is an extract from that piece:

“Invariably, he has had too many rabbit in front of headlights moments, and you can see why when he only played 12 league games for Maidstone in the Isthmian League, and signed by United after a handful of Fulham appearances. Van Gaal spoke pre-match about the need for cool heads in the Derby cauldron, so for that to go out of the window in two amateurish incidents makes it even more staggering. He cost us the game, no-one can dispute that.”

I don’t think at the time I was being uber critical, maybe I had “that” Olympiakos away game in my head upon writing but in November 2014 Chris Smalling had to go some to win back the faith of us supporters, but maybe also Louis Van Gaal too. He had some growing up to do, but not even with the most red tinted optimism did I imagine that Smalling would use that derby red as motivation to completely transform his United career. It turns out some good did come that from such a low moment, as we were hoping it would.

In typical media fanfare with United, Fleet Street fingers go into overdrive reveling in every and any shortcoming: Van Gaal is ruining United they say, same record as Moyes they mock, transforming players’ fortunes they never say. I would even go as far as saying that Smalling is United’s most improved player under Van Gaal, purely based from where he was standing ten months ago- a dark abyss, to where he is now- scooping man of the match accolades for club and country and establishing himself as a much-improved defender and almost first-pick for both defences.

The ‘leader of the defence’ tag in the headline will not sit well with many United fans, indeed it hardly speaks about United’s centre-back recruitment in glowing terms when Ferdinand and Vidic have not been replaced by finished products to nurture the likes of Smalling and Jones and Daley Blind is forced to deputise in a relatively unfamiliar role.

You would also largely consider it unlikely that a softly spoken Southerner would rise from the brink to become the ‘leader’ at the back. He is no Vidic, Bruce or Pallister by any means- he is not your ‘put your head where it hurts’, bruising defender, what he is however is a cajoler, a talker, a player playing with great defensive intelligence- his positioning and even ability on the ball, often ridiculed previously, have both improved to no end. Bruising he may not be, dominating he is becoming: He is now brushing forwards aside with his upper body, a mate texted me last night just saying simply, ‘Smalling has turned into a man’. Sounds about right currently, doesn’t it?

Such has been his progression, he has been promoted to ‘vice’ vice captain, I.e. Rooney, Carrick, Smalling in the armband pecking order. Whereas Phil Jones continues to gurn and continue to be the doctor’s worst enemy, Smalling’s curve has a completely different trajectory: He has got a run of games at centre-back and we are starting to see the defender we had all hoped when he was taken from Fulham.

The ‘perfect’, for want of a better word, chance to demonstrate and continue that rise will be on Saturday: A teatime kick-off, Sky cameras watching, the biggest foe are in town and he will be up against as physical a test as they come in the shape of Christian Benteke.

We saw in our last match how Daley Blind will get caught out against physicality and pace, Bafetimbi Gomis ran him ragged and Benteke will be a similar if not more daunting proposition to handle. If Smalling can nullify the Belgian and protect Blind in the process, United will have a platform to build and will hopefully get the win in front of our own fans, a much needed win after the reversal in Wales.

I get that some fans will not see Chris Smalling as their new flavour of the month, but I hope the doubters can at least admit that his rising off the canvas has been admirable.

For now, I salute your renaissance Chris Smalling. The humble pie tasted sweet!