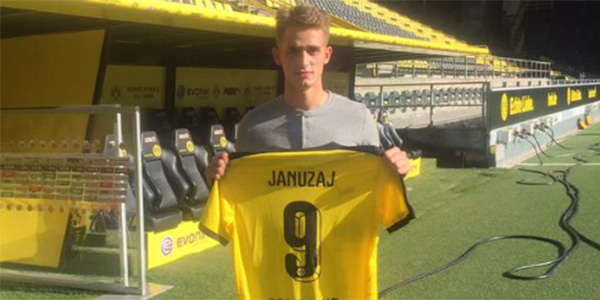 Positives were few and far between during the turbulent Months of Moyes that took United from first to seventh.

One, perhaps only one, was Adnan Januzaj. A player who was thrown into a game at Sunderland and delivered a dream debut dragging United back from a goal down to win 2-1. It was such a surprise to see a young player emerge and contribute to a winning United side that suddenly comparisons between Januzaj and Ronaldo gripped social media conversations.

It was unfair. One good game it might have been but to suddenly propel his name into the “potential great” category did him no favours.

However, the biggest contributing factor which has led him not being part of United’s squad for this season (at least) is that in those early breakthrough games; he was playing above himself.

When he broke into the side, the team didn’t help. He was showing pace and courage in a side that was slow and cowering behind an out-of-his-depth manager. The reliance on the young Belgian to deliver was bordering on the ridiculous at times as United’s horrific season stumbled from one embarrassment to the next.

If this was to be the next Ronaldo, he certainly wasn’t going to be treated like the former United number seven.

In his first season, Ronaldo was used in dispatches at times and was allowed to learn a position. Adnan was instead given the leading role in United’s big budget flop.

You see it so often with players these days. Success can just as easily go to the heads of managers as well as the player himself. There’s an obsession to get them into a central area where cockney pundits will tell us that “this boy can really hurt people”.

To borrow the words of a mancunian pundit, it’s a nonsense.

For all of Moyes’ failings in charge at United, I personally rank his inability to manage his brightest talent as up there with the worst.

From suddenly making a cameo appearance as a winger against Crystal Palace, the Sunderland game skewed Moyes’ thinking. The obsession with getting your best attacker in the middle took over and Januzaj was soon found wandering around a central striker, not really sure of what position to take up. Had he been allowed to develop in the left wing position he found himself in during those first games in a United shirt, I doubt he’ll have found himself holding a Dortmund shirt a couple of days ago.

At the end of the 13/14 season he found himself in no players land. An ‘attacker’. Louis Van Gaal, a man who’s bingo-like number obsession identifies each player in his squad, had no idea how to use him. Such was the player’s positional identity crisis that he ended United’s second game of the 14/15 season in centre midfield alongside Juan Mata(!).

Last season he did play wide, three consecutive starts against WBA (away), Chelsea (home) and City (away), though that’s hardly the type of “second season nurturing” that he needed. He was subbed against City after Smalling saw red and that probably summed his campaign. Unusable in many of the formations Van Gaal adopted, again due to him not being able to nail down an actual position, the season passed him by.

The start of the season emphasised the impact the first few months in a United shirt had had on Januzaj when looking at the last twelve. Emphasised not at Old Trafford, or even Villa Park, but over at the Etihad.

Gary Neville spoke at length about the change in City’s attacking threat. He spoke about the role Sterling was playing and his understanding of the left wing position. It was the clearest indication of how young creative players need to be allowed to develop in their own position. Sterling was close to being ruined by old Brenda. Moved from the wing to off the front and instructed to get the ball and hurt centre halves, it was a familiar tale to our own precocious wide man and his form nose dived as a result.

Now, after being told to stay out wide, he and City are reaping the benefits of him not having three players to beat every time he gets the ball and the play happening at 100mph around him. Instead he has an overlapping fall back giving him time to make his decisions and an opposing full back to beat one on one. Not rocket science, good management.

Look at Theo Walcott. I haven’t got a clue where his best position is. Emerged as a winger with promise, he and Wenger fell into the “get him in the middle” trap and he’s since been used as a solo striker, off the front, wide of a three and all without ever cementing himself in any of those roles. He’s 26.

The same can easily be said of Phil Jones…

The need to try and force young players into areas of the pitch they’re too inexperienced to cope with is hampering careers everywhere and has stunted Adnan’s. At his new club, you have to hope that it is a loan with an instruction to find a position for him. That position is where he initially made his explosive debut.

To impress the man obsessed with the positional numbers game, United’s number 11 needs to find form to regain his place at United by sticking to the position synonymous with the number on his shirt.