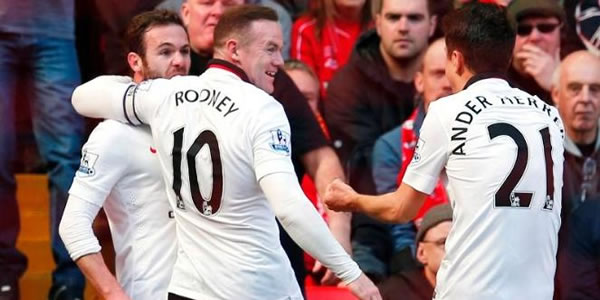 Something’s are enjoyably individually, but better when used together. Bacon & Eggs. Steak & Chips. Herrera & Mata. You look at a starting line-up that contains either, and you’re chuffed as fuck that we live in a time where they’re both at United. You see them line up together and you understand the way women of all ages get all frothy at Magic Mike type stuff.

Despite having such a Yorkshire born and bred outlook on things (everything’s shit), I genuinely went into this season believing that the huge impact Herrera had had on our run in form would make him one of the first names on the team sheet. Why wouldn’t it? Pass completion rate started high and got higher, he provided us with one of the most reliable midfield goal threats we’ve had since the Ginger Prince years, so why wouldn’t he be? If you’re looking to build on last season, then surely you stick with what works and just look to fix what’s broken.

When signings were made that clearly addressed the soft centre I moaned of in a previous post I was incredibly happy/mildly aroused. We now had some of the finest back four protectors in the market, and one of the finest young wide players in Europe, everything needed to wipe out any fears we had over Herrera & Mata not playing were now taken care of, the panic that their slight lack of speed and steel caused in the 5-3 defeat at Leicester was now surely nothing to worry about? If they were caught in possession it wasn’t the fatal blow it was at that stage. We now have a back 4 that understands what it needs to do to protect the goal behind it that’s being beautifully protected by the additions made to the squad this summer. Surely everything’s in place to kick on this campaign and get back to something like the attacking swagger that we all grew up on as United fans?

Unfortunately not. When the season kicked off it was clear that Louis’s focus was on defending effectively rather than attacking thrillingly. He continues to use Mata out wide, where he’s a lower risk if he is caught in possession than he was on a number of costly occasions that day in Leicester, but he’s also considerably less effective if he’s not playing in a side that moves the ball quickly enough to make up for the lack of pace in his legs.

Our greatest deliverer of quality passing that would open up the spaces that Mata, and our other attacking threats need to work in has spent 80% of the season looking on from the bench. It’s like having crystal champagne flutes and drinking white lightening from them!

My only positive I could cling to from that game and the manner in which we played it was that it would surely be the kick up the arse that Van Gaal needed to get Herrera on in the role that he made his own last season.

He started, but as an attacking square peg in a defensive round hole, it was almost as bad as seeing him on the bench. Thankfully when the second half started, so did Herrera’s season. Once he was playing in the final third he was able to make the passes that Memphis, Rooney & Mata had been crying out for.

Mata could make the short inside runs that he made so well last season because there was now a man capable of both spotting them, and playing the ball into them. Rooney played with a freedom that indicated he wasn’t scared to death of missing a chance as it may be the only one he got in the whole game, when they were laid on a plate for him by each of his attacking sidekicks, he finished them with a composure that’d been lacking for quite a while in a United shirt.

Yes it was Brugge. Yes Swansea and the remaining 50+ games this season (we’ll do well in at least 1 cup surely?) will provide us with much sterner examinations than these fallen Belgian giants ever could. But what last night showed clearly, was that if we’re to get the best out of a front 3 of Memphis, Rooney & Mata, than Herrera has to be polish used to make that attacking diamond shine.