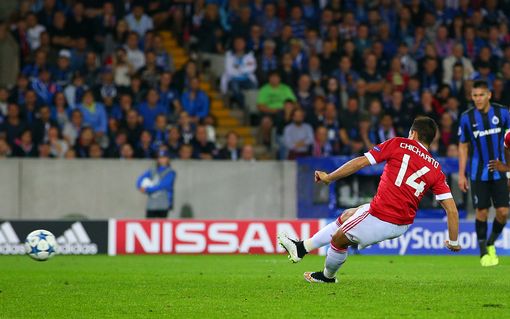 For the first time this season United made it look easy. Their return to the Champions League proper is assured and, once they learn their group stage opponents later today, full attention can be given to the match with Swansea City on Sunday. In the interim here are three thoughts to take from the happy result Club Brugge 0-4 Manchester United.

The United captain has been taking a lot of stick in the early going. The pet theory on his scoring woes was he had played too many matches early in his career, thus aging before his time. Three clinical goals in this contest, with a fourth brilliantly saved by the trailing leg of beaten-but-proud Brugge keeper Sinan Bolat, are unlikely to change the minds of most Rooney haters who will belittle the opposition. Of course that is probably the same crowd who will point to Ander Herrera’s goal against a demoralized opponent down five goals on aggregate and his earlier assist on Rooney’s second as evidence the Spaniard belongs in Louis van Gaal’s starting eleven. Never mind his poor play and profligacy in the first half.

Sometimes I wonder about United fans. Why do they throw support behind a dainty young Spaniard while asking their club and country’s grizzled captain not to let the door hit his ass on the way out? The Kop didn’t treat Steven Gerrard so shabbily and God and Sir Alex Ferguson know the Stamford Bridge faithful have looked past a mountain of controversy to support John Terry. They even applauded Frank Lampard when he scored against them in City colors. I can accept having to worry about Liverpool and Chelsea in the league table but it’s shameful to be looking up at them when it comes to loyalty and class.

2. Sergio Romero made a save!

Just the one, mind, but it was timely, charging out to smother the ball at Tom de Sutter’s feet in the one instance where Chris Smalling and Daley Blind were caught too high up the pitch. Other than that effort he had only been making David de Gea jealous in that he had a much better seat for the match.

This morning, after I wrote about the performance John Stones was giving Everton despite wanting out, the young defender handed in a transfer request. The result will either be his sale or disappointment. If it’s the latter you can bet Roberto Martinez will continue to play him. Would that Louis van Gaal had the same confidence in the goalkeeper who has done so much for him over the past twelve months. Romero will not have such an easy day against attack-happy Swansea on Sunday or against Liverpool and Southampton after the international break, should he still be Van Gaal’s preferred number one after the window closes.

3. Chicharito missed from the spot

First of all I think the penalty was harsh on the Brugge defender, Óscar Duarte, who had inadvertently headed the ball off his own arm. As it was incidental contact in a 0-4 shellacking and Chicharito had recovered possession for United referee Jan Breydal would not have been blamed for letting play continue. As it was Hernandez was assigned the spot kick with Rooney already having bagged his hat trick and Duarte’s blushes were saved when the Mexican’s plant foot went out from under him, causing his shot to dribble wide. Given the complete absence of enormity in the moment it’s something you hope he could laugh about afterwards. The looks exchanged between Louis van Gaal and a gum-chewing Ryan Giggs in the dugout suggest otherwise however. Meanwhile the rest of the squad will be happy, with eyes glued to this afternoon’s draw in Monaco to discover their opponents in the group stage.