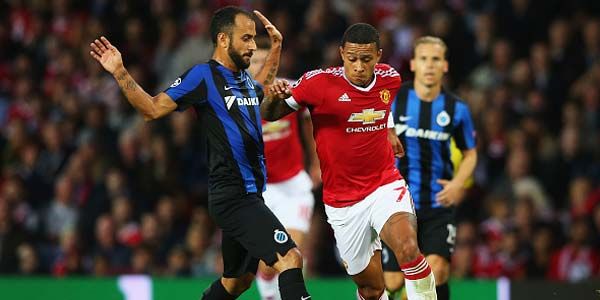 Champions League action tonight as we take on Club Brugge, looking to build on last week’s 3-1 win over our Belgian opponents.

Memphis Depay and Marouane Fellaini got on the scoresheet to secure a win last Tuesday but through a Michael Carrick own goal we conceded an away goal. Despite going behind early on in the first half, United pulled off a convincing win and are more than capable of doing the same when we visit the Jan Breydel Stadium.

There has been a lot said about the way in which United have performed under Louis van Gaal. Regardless of how much has been spent since his arrival over a year ago, the reds still look flat and pedestrian going forward but it’s a different story defensively as United are yet to concede a goal in the league after three games.

“Our possession of the ball is good because of our system. We always have three options when we are playing well to play the ball,” van Gaal told MUTV. “I hope that we have more luck than in the last match though because, of course, we didn’t have that and we have to improve the last pass.

“We are getting there easily, that’s not a problem, but now we have a problem with the last pass or the finish so I hope we can show that and do well on Wednesday.”

Fans have jumped to the conclusion that a new centre forward is needed to takeover from Wayne Rooney. Even though it’s probably fair, I can’t see van Gaal dropping his captain. The boss would seemingly prefer a speedy right winger to accommodate Wayne offering pace on either side whereas, in my opinion, Juan Mata’s through balls from the right would work wonders with a striker fast as lightening.

Without going off topic, listen to this week’s Strettycast to hear us discuss Rooney AGAIN.

Van Gaal informed journalists that Fellaini would be used as an attacking option this season in the pre-match press conference. This is not exactly total football that was expected when the Dutchman took over.

Giving his own take, Fellaini told reporters: “In the past, I have played no.9 and no.10. I have to help the team – I can play there. It’s not important where I play. The most important thing is to win the game, of course. I enjoy all the different positions I can play in.

Club Brugge were nothing special and United were in total control. Memphis had a field day and I expect the same again tonight which is good for his confidence.

We should have put more than three past them at Old Trafford but the aggregate scoreline is what it is. United have some unfinished business in Belgium and if van Gaal has the team playing in a conservative manner, we’ll make hard work of it.

This United side should be mullering opposition like Brugge and qualifying for the Champions League stress free.