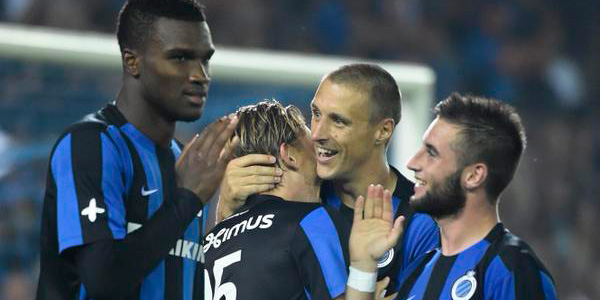 We spoke to Mancunian John Chapman of belgofoot.be ahead of Manchester United’s Champions League qualifier against Club Brugge to learn more about our Belgian opposition.

Chapman (@Belgofoot) has been writing about Belgian football since the 20th century and has contributed to World Soccer Mag, WSC, Telegraph & Unibet.

1. What is Brugge style of play and formation?

Club Brugge play either 4-4-2 or 4-3-3, sometimes changing during the match. They were the league’s leading scorers by far last season (69 in 30 games) and they also had the best defence (28 conceded, the same as Genk – under Alex McLeish). For most of the season they played attractive football with the main creative force being Victor Vazquez but a serious injury to him made Michel Preud’homme play a more cautious game with more emphasis on closing the game down.

Michel Preud’homme – For me he is the key behind Club Brugge’s rise. Last season was his first full season and he’s now had time to shape the squad into one that follows his instructions. He leaves nothing to chance and he wants everyone pulling in the same direction. He’s brought success to several clubs – most of them having won nothing for years.

Victor Vazquez – Playing in the Barcelona youth sides along with Cesc Fabregas, Gerard Pique and Lionel Messi, Vazquez was thought by some to be the most talented of his generation. Didn’t make it there and has only blossomed under Preud’homme. Was one of favourites for 2014 Player of the Year – talented but can be a bit fragile. Has recently indicated he would like to leave.

Lior Refaelov – the other creative force in the team. Can blow hot and cold but looked better when Vazquez was missing. The hero of the Cup Final with a last minute winner. Out for a couple of months injured.

Timmy Simons – veteran captain (38) who played more minutes last season than any other player. Has hardly missed a game (Lommel, Club Brugge, PSV, Nuremburg) in 20 years. Sits in the front of the back four, hardly moves, but brings tremendous experience and know-how to the team. (or can play in central defence)

Hans Vanaken – talented midfielder who joined from Lokeren this summer. Could be the main creative force in the team and one reason why Vazquez fancies a move.

a) Last season, Michel Preud’homme’s men played more games than any other club in Europe. General Manager Vincent Mannaert does not want a repeat performance this season and has been forceful in saying that the title is the club’s priority. They won’t be focusing on the Champions League, although the odds would always be against them getting through the qualifiers.

The Blauw & Zwart have lost Australian keeper Ryan to Valencia and they’ve brought in a couple of replacements – Sinan Bolat and Sébastien Bruzzese – but neither has received the number ‘1’ jersey. The loss of Ryan might have an impact on the club’s desire to bring the title home after an 11 year gap.

b) Club Brugge never stop fighting. They will always play for 90 minutes and in Simons, Mechele, De Sutter and Vormer they have competitors in all areas of the team.

c) Injuries are causing problems, especially in defence. Thomas Meunier and Bjorn Engels (long-term) are all missing. Meunier was close to a place for Belgium in Brazil and is also an attacking force from full back. José Izquierdo also out.

d) There are some good youngsters.

• Obbi Oulare is 19, 6’ 5” and was at Lille with Divock Origi. Did not make the grade there and is hungry now, Belgium U21 international. Striker.

• Boli Bolingoli-Mbombo is 19, cousin of Romulu Lukaku, scored twice in Istanbul as a sub.

• Nikola Storm – 20 year old winger, Belgium U19 international, has moved down a bit in the pecking order but has speed and could be useful.

• Dion Cools is a young full back who has come in and looked good as Meniere’s replacement.

e) Preud’homme should not be under-estimated.

f) They lost Mat Ryan – Australian keeper, best in the league to Valencia. Lots of clean sheets and basically won the cup for Club Brugge with great saves. Was also instrumental in the Europa League draw with Torino (0-0).