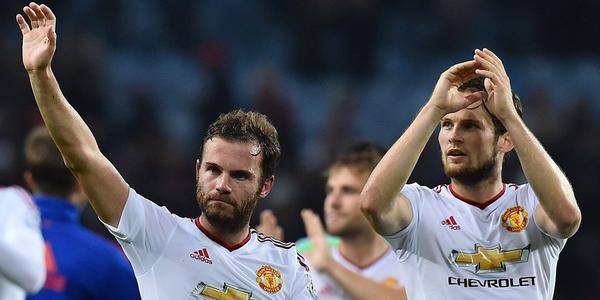 Our back 4 proves that football is a dangerous thing to try and play on paper.

On paper a unheard of Italian, occasionally slack Englishman, a Dutchman high in beauty but low in stature & a young lad who gets injured more often than Katie Price gets knocked up doesn’t bode well.

Throw in the keeper situation that’s looking like a scene from Fawlty Towers and the odds on us keeping back to back clean sheets would be longer than Arsenal’s wait for a genuine title challenge.

Fucked if I know would be my answer, but I’ll throw a few ideas about as to how we’ve somehow achieved this…

We didn’t have much of it for the back 4 last season. When we did it worked really well, but when your only reliable method of protection is an injury prone guy approaching his mid-30’s, then you’re in trouble.

Thankfully Van Gaal went out and brought in players who can do what Carrick does, but more regularly, and potentially in the case of the Schmidfield 2, to a higher standard.

Last season we were softer in the middle than a melted choc-ice. That Sunday in Leicester will haunt us all for the rest of forever! We had nothing! No one who could slow the game down, create time for the back 4 to get their breath back, or offer any protection anywhere from the waves of attacks coming our way. They got the ball, hit it over the top and scored.

That’s clearly been addressed this season. We’ve a system in place that makes getting into our final third much harder. While that doesn’t wipe out the need to worry about the back 4 entirely, it reduces the need to if it’s no longer under the same pressure it was last season as sides looked to be cutting through us at will in some games.

When Darth Cowell saw the 5 would be TopShop sales assistants audition as solo acts, he knew they were shit individually compared to others you’d seen, but he as a man who knows more than we do about how to put successful teams together saw something in their ability to work together that made them worth a punt.

When you look at Van Gaal’s approach to the season’s start and it’s slightly similar.

No one had heard of the Darmian before he arrived, but within 2 games he’s shown that he’s the potential to be something truly special. Not since The New and his man-child take on the Magnum PI tash have we seen such a commanding presence protecting that side of the pitch.

Smalling, big questions were asked after the sending off at City last year, and his performances since then have answered them beautifully. If he carries on through the season as he’s started it, the only other question that’ll need answering is how long it will be until he gets the armband off Rooney.

Blind is another funny one, you list his qualities as a player against what you need to be a great centre back, and there’s not many boxes being ticked at all. But he’s shown that when you’re an incredibly intelligent footballer as he is, then you can use that intelligence to get around it while he’s playing there. Is he a long term solution? No! But he’s a much better stopgap than we thought he’d be in preseason and that helps ease the worry we have about what to do when Jones is out for another 6 weeks after trying to kick the colour out of a brick or some other weird adventure he goes on.

Shaw, his first season was clearly one where he was caught in the headlights/kebab shop depending which way you want to attack his debut season. But credit where it’s due, the lad came good (when fit) towards the end of last season, went away with a plan over the summer to be fit enough to command a place this season, and he’s started off in a manner that suggests he’s more than worthy of it.

So somehow, as if he’s actually got a clue what he’s doing, Van Gaal has created an understanding within his defenders of exactly what’s required of them to get the job done. They’ve clearly listened to him and if they can continue to act on his words, Jones & Rojo included once they return, then they as players, and we as a club will only get better from here on in.

Fewer square pegs in round holes

Looking at last seasons darkest moments, they often came when we clearly had a patched up side on duty. A winger at right back, a centre forward in midfield & Di Maria expected to play like he gave a fuck, it was often disastrous, and when things are like that you get pushed further and further back as you’re examined for how you’ll cope under this self-imposed pressure, and let’s be honest, we regularly struggled, if not for the efforts of the soon to be departed Spanish Dave, we could have had a ropier season than we had under Moyes.

What we can see in these early days is that players are playing in more natural positions, this gives us greater control of the game and the tempo it’s played at. I know currently it’s lacking in excitement, but it’s also lacking in the tension that came from some of the headless chicken stuff we’ve seen played by the shambolic squad that Sir Alex left for his replacements to work with.

For anyone looking for the glory glory years to continue this is something of a blow to the system. But to those of us who saw how far our squad quality was falling behind the likes of City & Chelsea continued building year on years, it’s a happy sign that foundations on which we can try to build future success are finally starting to take shape.