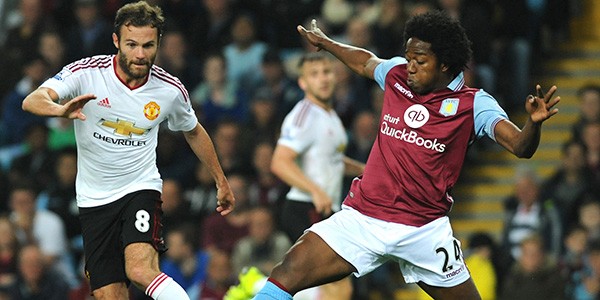 For Louis Van Gaal’s United to progress this season, it was, and still is, imperative that the club banished those early away day blues from last season, which ultimately ended up hampering any hopes we had of claiming an unlikely title. United only remedied their travel sickness by early November last year, a far cry from the formula required to challenge for honours, an ill which has to be rectified this campaign.

With that in mind, Friday night was the ideal start to our away campaign: Again it wasn’t swashbuckling but it was gutsy and solid- traits that are essential to come away from Premier League venues with maximum points, traits that we were bereft of on the road at times last season. It is not easy away from home, Villa had their spells on Friday night where they pressed and harried and tested our ability to hang in there and withstand those periods. It was solidly unspectacular, a developing theme under Louis Van Gaal, like it or not.

Judging players after two games, when they are working their way up to full match fitness and shaking off the off-season cobwebs, can be somewhat rash. More on that later. So, with an element of rashness on my behalf, patterns are emerging:

The two full-backs Darmian and Shaw look two young, hungry players who will go on to have big futures at United. They have shown, in the two games so far, a composure in defence and always offering support in attack. It’s scary actually how much of an upgrade Darmian looks compared to Rafael and Valencia- although someone ought to tell him the Italian ‘art’ of defending from corners has never really caught on in England. Apart from that, his start to life in Manchester has been very commendable indeed.

It might sit uncomfortably with a lot of reds that the phrase ‘Chris Smalling is the leader of a Manchester United defence’ is reality, but he has carried on in the same vein as the end of last season and has been a rock at the back. Should United be in a situation where Smalling is classed as the ‘senior’ man? Definitely not. With Nicolas Otamendi heading across the city, where does that leave us? The Mats Hummels talk has died a death seemingly, Ramos was never happening and can Rojo, Jones and Daley Maldini step up to be the bedrock of a potential title winning side? Think we all know the answer…

How much more comfortable did we look with the introductions of Bastian Schweinsteiger and Ander Herrera? And how great is it to finally have genuine competition in the engine room?

I love the way Schweini, despite newbie status at United, is bossing the midfield, telling people where they should be, using his wealth of experience and know-how. What a character to have on the field and around the dressing room, it’s still surreal that he’s finally ours. You have no worries at all, the way he controls the midfield. If he is managed effectively, and when he gets back to full fitness, we will get 40 odd games from him this season and the £14M paid will be money very well spent.

I’m sure you were all chuffed from Adnan Januzaj notching the winner, coming out of the cold. His name in the starting XI was a surprise call, with many pining for Ander Herrera to replace Ashley Young. Januzaj has that unpredictability and ability to produce something from nothing and the way he sat Micah Richards on the floor before finishing showed a man who is confident and composed. All the talk was he was to be loaned to Sunderland, we will be having second thoughts now, Sunderland are a mess anyway.

Now, back to the hasty two game judgement from earlier. People seem to be questioning Memphis already, despite being a kid in a new league. God forbid anyone be allowed time to settle into new surroundings. He has shown signs that it will soon click into place- his strength is tailor made for this league, his movement is excellent, it is just a question of forging relationships and that will be something that will develop every day. People will point to that miss which would have settled the game and will label him a flop already but Bruges is a great chance for him to get off the mark, don’t be surprised if he does.

Much has been made of Wayne Rooney’s abysmal display at Villa, Ian Wright going as far as saying Rooney can no longer play the No.9 role. There are two things we know for certain with Rooney: When he is off-colour, he is REALLY off-colour- where nothing goes right at all and he always takes time to get into full throttle. I’m not privy to whether he hits the kebabs, pints and fags but I suspect he does. He doesn’t look fully fit, but then again who is in optimum condition only two games in?

I’m not prepared to write off Wayne Rooney as a spent force yet. Historically, Rooney always goes on scoring streaks, if we provide more cutting edge ammunition to get him into the game, the goals will surely come. Maybe that looks wishful thinking right now, as does Van Gaal’s insistence that Rooney has to be the man to score 20+ goals this season. A new out and out striker to provide much needed competition and to get him out of the ‘guaranteed start’ comfort zone is a must though. But who is out there?

An out of sorts Rooney, marginalised Hernandez, unproven Wilson and makeshift Memphis and Januzaj up top is not a patch on an Aguero, Costa, Benzema, Lewandowski or Muller.

Despite those question marks, it’s 6 points from 6 without firing on all cylinders, with Newcastle at home next. We have the chance to really hit the ground running. A five point cushion above Chelsea is pretty mint, admit it!

Banana skin it may be, but I’m buzzing for Tuesday night. The return of Champions League football under the Old Trafford lights, the spine tingling Champions League theme- fantastic! There’s something about night games, particularly in Europe that brings the best out of us supporters: whether it’s the late afternoon pre-game booze or us just relishing the biggest of stages, hopefully the atmosphere on Tuesday will be up to the recent standards we’ve upheld lately.