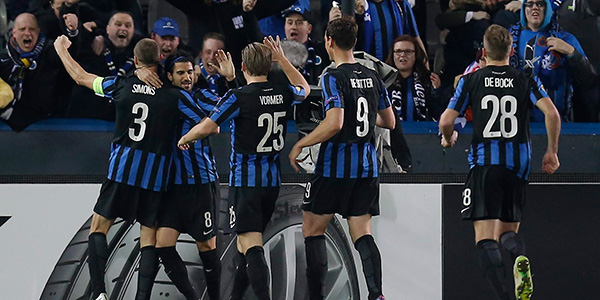 You are forgiven for not being overly familiar with the lads from Club Brugge. In fact, this will be the first time that United have ever met the Belgian side in a competitive fixture.

FCB [or simply Club to their supporters] finished second in Belgium last year and also won the Belgian Cup, their first trophy in eight seasons. It’s their record 11th Cup, to go with their record 13 Belgian Supercups and 13 League titles [behind rivals Anderlecht] – so this club is no stranger to silverware.

Former Belgian international keeper Michel Preud’homme has been in charge since September 2013. The club rely mainly on their academy to stock the team, but they do have a few old heads around [captain Timmy Simons is now 38] and a sprinkling of internationals from other countries.

Club usually line up in a 4-3-3, but have tried a 3-4-3 during their Euro away match at Panathinaikos earlier in qualifying.

The side is currently suffering major injury problems at the moment, which will make team selection against United a challenge.

As you’d expect, FCB are not heavy hitters in the transfer market – they spend wisely and within their means. They’ve sold keeper Mathew Ryan to Valencia and have agreed a deal for striker Tom De Sutter to go to Bursapor – but only once the two games with Manchester United are finished.

Hans Vanaken has just joined from Lokeren to add creativity to midfield, and the attack is bolstered by Abdoulay Diaby from Lille. No less than three new keepers have come in to vie for Ryan’s gloves, but Sebastien Bruzzese has seen most of the action between the sticks.
Early Season Results:

Club started the season playing the Belgian Supcercup and lost 1-0 to title winners, Gent. They made it through to the United matchup by beating Panathinaikos 4-2 over two legs. In the Jupiler Pro League, FCB currently sit top on seven points. Like United they played their most recent league match on Friday – beating KV Kortrijk 2-1.

Old Trafford will be rocking as European football is back, but our opponents have nothing to lose. Their road form has not been great though, so let’s hope for a positive performance and result.

This article was originally published at calgarymufc.wordpress.com. The author, Ken Frampton, gave Stretty News permission to use it.