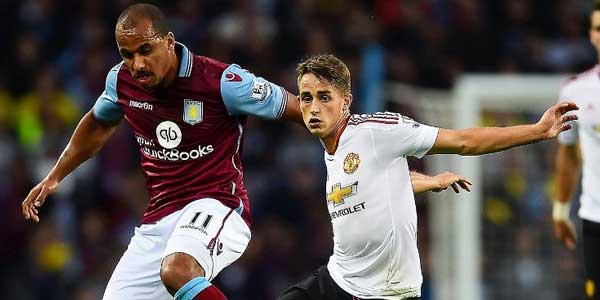 Louis Van Gaal’s men made it two wins from two on Friday night against Aston Villa, starting our away campaign in much better fashion than last season. The manager sprung a surprise before kick-off, with Adnan Januzaj making a rare start, his first in six months. He replaced ex-Villa winger Ashley Young in the only change from the victory over Spurs, with Memphis reverting to his more familiar role on the left flank.

Villa came out of the blocks in the opening twenty minutes and pressed United well. The home side failed to capitalise on their start and, like throughout the game, seldom tested Sergio Romero, continuing in goal as the De Gea saga rumbles on.

United got a foothold on proceedings after withstanding that early spell from Villa and ultimately got the decisive goal when Juan Mata roamed off the right-wing and played a beautiful ball to match the well-timed run of Adnan Januzaj: The Belgian feigned to shoot, sending Micah Richards to ground, before his right-footed shot deflected off the outstretched Ciaran Clark and went in off the post.

The second half had a similar pattern to the first: Villa trying to assert themselves on the front foot before United getting a measure of control- helped by the introductions of calming duo Ander Herrera and Bastian Schweinsteiger, whose class was there for all to see.

United managed to see out the game despite Wayne Rooney barely showing up and Memphis missing a glorious chance to put the result beyond doubt.

Things are starting to fall into place, Darmian and Shaw looked solid yet again, as did Morgan Schneiderlin. There is genuine competition for places and a plethora of talent, particularly in midfield. If the squad can be bolstered and refined further before the window closes, namely Pedro and a commanding centre-back and possibly a forward, then we can maybe talk about challenging.

The Champions League is back under the Old Trafford lights on Tuesday, and how we have missed it!