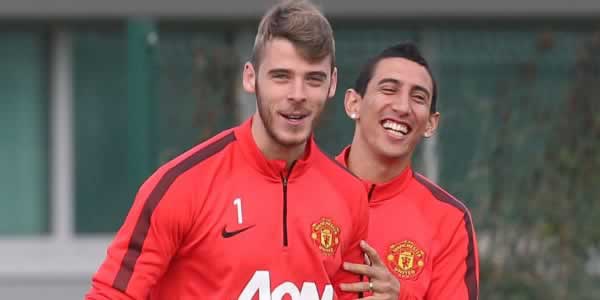 You’ll never see confidence sap so quickly out of United fans as quickly as it did when it was announced David de Gea wasn’t going to play against “Lads, it’s Tottenham” Hotspur last weekend. Most of us certainly had degrees of concern over a sparse attacking line-up and a central defence which look about as secure as the attendance record of a North Manchester comprehensive school.

However, the full-backs looked good, the midfield was packed with talent and then there was Memphis, a Dutch CR7. Dave seemingly staying for one more season at least was at least a moral victory over a Real Madrid, a club steeped in the far right (not a patch on their city rivals though), government bailouts and the politics of its obnoxious president. Seeing Real told to kindly stick one up their backsides and cancelling out their leverage for one year at least gave us some more spring in our step. “Not this time Perez! Our man won’t spit his dummy out for you lot.”

Except Dave did. The nonsense about De Gea not “being right in the head” as it was put, to play is nonsensical business buzz speak, like City taking “a more holistic approach” to management. What a stinking pile of tripe! Dave was sulking because his current employers didn’t cave to his desired employers and Van Gaal dumped him out of the match day squad. Make no mistake, Van Gaal may have been looking after the human being and being gentle father figure publicly but private he was laying down the law. De Gea and “his people” a.k.a. “Super” agent Jorge Mendes threw the dice to force through a move to Real.

This was a high profile example of the mad Dutchman laying down his law.

I wonder where the attitude of United fans will go from here though? Particularly in light of Angel Di Maria’s astonishingly clumsily handled move to Paris Saint Germain via a medical centre in Doha. Di Maria earned the contempt and ire of United fans for how he conducted himself from around February onwards and disappearing rather than turning up for pre-season was a last straw for many. Sure, Manchester United’s own Secretary of Defence may still have got on the plane but it was blindingly obvious his desire to be there matched my own desire to spend a Friday night out in Blackburn.

Of course Di Maria’s behaviour was disappointing, culminating in him buggering off at an airport rather than attending a cynical and shameless commercial pre-season tour…to join a club owned by a shameless and cynical oil billionaire. He certainly did not help himself by displaying all the penetration and energy of a recently neutered dog in his final months with performances so poor he was deemed inferior to swan diving, stop gap Ashley Young. His statement to the fans to get them onside after leaving were too little too late and a rather transparent effort from his agent to keep a business partner onside.

On the other hand let’s not forget Morgan Schniederlin’s social media hissy fit last summer, Wayne Rooney’s multiple transfer requests and Ronaldo spending the large part of his last season sulking. Di Maria didn’t like Manchester, he always wanted Paris, even if the place is a bit of dump with Manchester like-weather, riddled with poverty and suffering rising fascism, think a more cultured, tourist-friendly version of Oldham. Nothing wrong with that and there is nothing wrong with De Gea wanting to live in Madrid, a beautiful city with nicer weather and importantly, his family.

But where is the outrage from United fans? The prevailing attitude to De Gea is one of pandering and begging him to stay, despite the fact he’s been angling for a move and carrying on with this tedious soap opera for months.

This was treatment Di Maria never got, he may have at least thought about staying if he had. The rakey, Argentine, was called, soft and got digs about his looks while United fans clamoured for Gareth Bale, a man who has repeatedly turned United down. It’s more than a little hypocritical attitude but represents the idiosyncrasies of the average football fan (see Newcastle, Pardew). Di Maria never sat right with United fans and he probably would have had to outperform Ronaldo and Messi on a weekly basis just to get us partially onside.

Imagine De Gea drops a clanger in his return to the first team. I don’t imagine United fans calling for his head, clamouring for the signing of Hugo Lloris and saying De Gea looks like a stoner Judd Apatow comedy. Personally I hope United fans stick with De Gea, his reasons for leaving are ones that can be easily empathized with. I just wish United fans offered a little more support for Di Maria rather than rank hypocrisy. Di Maria was a man with the potential to transform a team that looks awfully stale and devoid of pace right now, De Gea is fantastic but more replaceable.

Still it could be worse, we could always be the slapstick carry on known as Arsenal Football Club, and they’re just too hilarious to make up.