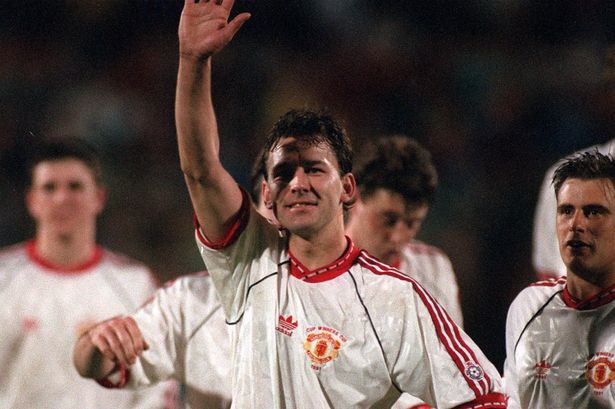 In 1984 after sixteen years since we conquered Europe, Manchester United found themselves in an impossible, against all odds situation when they faced Diego Maradona’s Barcelona in the European Cup Winners Cup quarter-final.

United were 2-0 down after being given a footballing lesson at the Nou Camp. The atmosphere leading up to the game was one of despondence, with a slight cheeky glimmer of hope.

The team line-ups for that evening in March was:

Now to make matters worse, Barcelona were guided by the Great Cesar Luis Menotti and to be fair to Ron Atkinson, as charismatic as he was and a style of play that suited his wardrobe, when it came to tactics, against Menotti you didn’t fancy him.

However, Big Ron’s style of play gave the fans hope, even though deep down every fan knew a single goal from the best player of all time, could happen at just about any moment of his choosing, he was that good.

Maradona must have been thinking: “Right! Lets win this and get out of this Country and back to the sunshine.” Remember at the time Maradona had a big reason to drive an arrow into the hearts of our club, his country after all was falling apart and Great Britain had just humiliated Argentina over the Falkland Islands, so Diego was up for this.

However Diego hadn’t taken into account two things, one was the Manchester United crowd and of course, Bryan ‘Captain Marvel’ Robson.

How Barcelona must have wished he was injured, because Robbo put in a performance that many who witnessed it regard as the greatest they ever saw.

We had forgotten nights like this and Atkinson would remind us what European football is really about. This would be one of the great Old Trafford nights.

Bryan Robson from the off was like a man possessed, the team clearly responded and so did the fans. Their despondence suddenly turned into a cauldron of support that even the great Sir Bobby Charlton commented that he had rarely known a more noisy crowd.

With 22 minutes gone Robson connected with a diving header from Ray Wilkins’ corner sending the crowd absolutely wild and giving the fans confidence which would build and build during those tense half time minutes.

The whistle to start the second half got the 58,350 crowd going again and the team responded and drove forward, then five minutes after the break, Robson forced home from close-range after the goalkeeper who had misjudged the tremors from the stamping feet of the Old Trafford faithful, fumbled a Wilkins cross, it was game on we had the momentum. Not settling for that amazing achievement, Robson got us going again with a majestic outside of the left foot pass to the fullback, who crossed to Norman Whiteside, he knocked it down and there was Frank Stapleton with balls of steel to smash it from such an acute angle and history was made…

It is sad that many of our fans didn’t have the pleasure of witnessing Robson do everything in a football game, passing, box-to-box running, tackling, scoring and dominating teams.

What could he have been without those injuries? How we missed him, how England missed him. I argue that if Robson played in that 1986 match vs Argentina at the Estadio Azteca, Diego Maradona wouldn’t have scored that second goal. He would have been nursing his knee from a fair challenge by Bryan Robson, slumped on ground around 35 yards from goal for cheating.