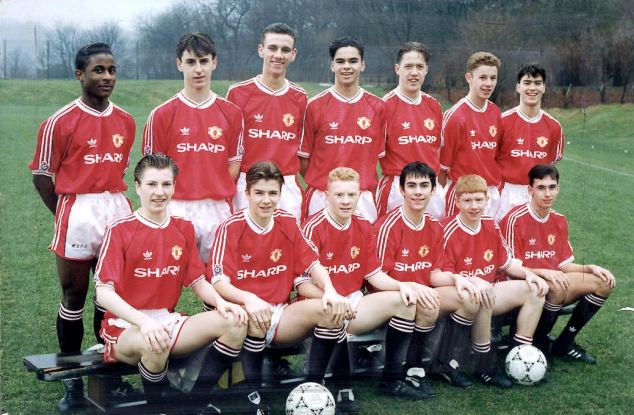 After two and a half hours sleep I featured on radio show Football Matters in the States. If it wasn’t for an extra strong coffee listeners would have had to adapt their ears to an even groggier pitch on everything Manchester United.

Sadly there was connection issues during the broadcast (damn you, Skype) but third time lucky the ball got rolling.

The hosts on Football Matters, Blaine Humbles and Kevin Kaisaki, were incredibly accommodating and willing to offer me, as their guest, time to speak on topics requested.

A question that I found most intriguing was one regarding Manchester United’s spending of late and whether or not it sends a negative message to members of the youth academy. Former United striker Andrew Cole recently wrote a column on this very topic but with an added view on local hopefuls.

When surrounded by the Neville brothers, Paul Scholes and Nicky Butt, he sensed something unique that other players in the dressing room did not initially share to the same degree. Manchester City, at the time, were nowhere near United, but this crop of local youth team graduates still wanted to destroy them just like Liverpool.

“Local boys add value to any dressing room. They’re fans with boots on, the ones who know better than any others what it means to play for the club. Their family still live among supporters, their mates go to games home and away, they’ve played against rivals since they were 10. It’s all positive.”

It is quite satisfying when a youngster comes through the youth system and makes it into the first team. From Paul Scholes to Darren Fletcher or Danny Welbeck, it creates a bond between fans and their stars.

From the Busby Babes in the 1950s to George Best a decade later and the Class of ’92, it is a tradition that has instilled pride in the club’s fans.

Now Manchester United can then go into the market and throw near £60m at Real Madrid for a player that will sulk a season when things aren’t going his way, make no effort to bond with the fans that help pay his wages and sling his hook off to Paris a year later.

Of course, not all signings are like that. Patrice Evra, a Frenchman, formerly of AS Monaco, came to Old Trafford and understood exactly what the club was about. Still to this day he speaks highly of what he achieved and probably misses everything regardless of featuring in a Champions League final for Juventus since his exit.

Then you get fans that dreaming of starting elevens full of world class recruitments – the type of model Manchester City attempted to introduce, although have recently invested in a a state of the art training complex with a clear objective to develop better players from the youth academy – rather than a balance.

Louis van Gaal needed financial backing amid his arrival and a year on he continues to receive it. Cast your mind back to the later stage of the Ferguson era – after the Glazer takeover in 2005 – when holes were creeping into the team after European success in 2008.

Each summer we heard ‘there’s no value in the market’ when the club was in dire need of improvements across the board. Fergie’s genius goes beyond success when you consider how many holes he filled with mediocre players through top class management.

The squad that last won the Premier League title at Old Trafford consisted of Anderson, Tom Cleverley and others fans joke about today. Then, ironically, we’re nowhere near the level expected to win titles with better players.

So, where is the balance with spending fortunes and blooding through members of the youth academy?

Van Gaal is renowned for showing faith in youngsters since his heroics at Ajax back in the 90s. It would be a legacy in its own right if he can do something similar at United and get the academy booming again.

Unforgivably, the Glazers are playing catch up with their spending and new signings take time to gel.

Predictably, these are another set of bullets the owners cannot dodge…

Meanwhile in a world that consists of nothing other than Manchester United, Daley Blind sounds confident that he can excel at the heart of defence.

Reluctant to dismiss Blind an opportunity, this is not something we, as fans, were hoping to hear when the transfer window opened.

Considering all the money spent and speculation increasing on YET ANOTHER midfielder, it’s fair to wonder what scouts at the club were researching last season if van Gaal has no alternative option to Real Madrid centre back Sergio Ramos.

“I’ve said many times before that I just want to play,” Blind told MUTV.

“If you see what everyone can add to the team, then it’s a real battle for places and everyone had to fight for a position.

“I got a chance on this occasion and I tried my best. Of course, people always say I don’t have the height or the power but I think I’m clever enough and smart enough.”

The manager has played Blind at left back, centre back and midfield since his arrival a year ago which not only shows his faith in the player but willingness, no matter what, to have him in the starting eleven.

“If you see our opponent today, he’s very good; he wins a lot of headers and duels in the striking position so it’s not only about power and force,” he continued.

“I think we did well at the back, together with Chris, Luke [Shaw] and Matteo [Darmian] and we get a clean sheet so I was happy.”

Defensively against Spurs it was Darmian and Smalling that stood out. Prior to the opening fixture of the 2015/16 Premier League season most feared the worst with Harry Kane setting out to tag alongside the noticeable weakness in United’s back four – Blind – but thankfully that did not happen.

A case of not being clinical enough saw Spurs gift Sergio Romero a clean sheet on his debut, not a defensive masterclass.