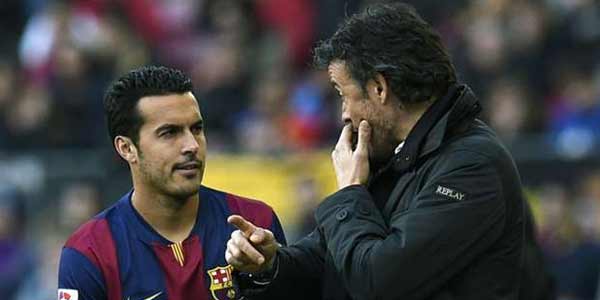 Former Arsenal and Barcelona player Thierry Henry believes Manchester United would be getting their hands on the ‘perfect’ winger if they can seal a deal for ex team-mate Pedro Rodriquez.

In Henry’s column for The Sun, Pedro is described as ‘excellent’ and the ‘perfect team-mate’ at Barcelona for his understanding of wing play.

“No one was better at applying pressure from out wide. It is a position that is in his DNA – it’s been drilled into him by a lifetime at the Nou Camp and why I believe he will be such an important acquisition for United.”

Henry is also of the opinion that Pedro will be a better fit for United than Angel Di Maria, who joined from a Champions League winning Real Madrid side last summer and has since been moved on to Paris Saint-Germain.

“Pedro will be much more disciplined,” Henry explained. “He was more than important to Barcelona’s success, even though he spent much of last season as back-up for Messi, Neymar and Suarez.

“Pedro is generous in his defending, he can score goals and give plenty of assists. He is a great professional who will do anything for the team. I loved him as a team-mate and he can have a real positive impact on the Premier League.”

It should not be seen as an embarrassment for Pedro being unable to break into Luis Enrique’s squad when you consider the three attackers (Neymar, Messi, Suarez) ahead of him. And as far as combinations go there is not a single player that would break it.

Nobody knows when – or perhaps if – a deal will be completed but having seen United’s performance against Spurs at the weekend, more pace in attack would benefit us massively.

One response to “Thierry Henry: I loved Pedro as a team-mate at Barcelona”