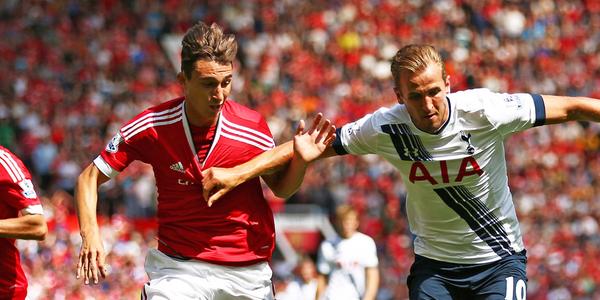 Welcome to the first rambling of the 2015-16 season. I’m sure you’ve been waiting for this with bated breath.

How good is it to have United back in our lives? Weekends between now and next May will not be the same. I’m sure I’m not just speaking for myself here, but like a kid at Christmas doesn’t even come close to how Saturday morning felt. Being in and around Sam Platts, sun shining, beers flowing, going on the piss with Georgie Best reverberating around the concourse, optimism in the air. It’s good to be back!

We started off slowly, Spurs looking more accomplished on the ball and controlling the game for the first twenty minutes. It took our first goal of the season, almost a symbol of our messy start to the game, to spring us into action. At times, it mirrored the ills of last season- the transitions from defence to attack were a tad pedestrian and, having lost pace in the form of Angel di Maria, that is an obvious area we need to address: the widely anticipated transfer of Pedro from Barcelona will go a long way to solving that problem.

We improved marginally but it was a far from convincing opening day performance- but hopefully we can just put that down to first game cobwebs. It goes without saying, but the most you can hope for when not at your fluid best is to still grind out a win and get a clean sheet to boot, given the ongoing circumstances with you know who. More on that later.

Before trying to splash a bit of clarity into rather muddied waters as far as our keeping department is concerned, there were a few opening day positives which are praiseworthy:

Although it is easy to get carried away after one performance, there were standout performances: The two full-backs looked accomplished, defensively sound and full of running offering assistance in attack. Luke Shaw certainly looks to have reaped the rewards from significant industry and hard yards over the off-season. He is electric going forward and if he can steer clear of the injury problems that dogged his first year progress, he will have a big year for us.

Ask anyone of yester year who has excelled at full-back, and they will say that the bread and butter for any full-back is to be solid defensively. Rafael, as much as he was a popular squad member and a good attacking outlet, never managed to eliminate the rashness that marred the defensive side of his game. At a first glance, ‘rashness’ is not a word that is associated with Saturday’s man of the match Matteo Darmian. Although it’s rather presumptive to make a firm judgement after one competitive game, the Italian’s positioning and reading of the game will offer United consistency and reliability in a position where those two requirements have been missing for too long. Darmian looked a United veteran, praise I do not think is too high, it was a very encouraging debut.

You would have got long odds, after his schoolboy sending off at the Etihad last season, on Chris Smalling emerging from such an abject low to become a linchpin of United’s defence and growing in stature by the game. His progress over the last few months has been that much chalk and cheese to Phil Jones: If Smalling has emerged as our Blackadder, Jones very much remains the Baldrick of the defence.

Smalling is now marshaling the troops, striding out from the back with the ball and becoming much more dominant. For the second successive season, a supposed £40M striker has barely got a kick out of Smalling in this fixture. United are still in desperate need of a commanding, senior centre-back, emphasised by Daley Blind being used there, but Smalling has picked up where he left off last season and is showing signs of reaching his potential.

How nice is it to have finally signed central midfielders who offer the dynamic combination of bite, steel and vision? Morgan Schneiderlin fitted in seamlessly and gives us a fantastic screen in front of the back four, putting out fires and being tidy in possession, always keeping the ball ticking over. It was surreal to finally see Bastian Schweinsteiger wearing our red, if only it had been a few years earlier. We have signed a winner, a warrior, someone (as demonstrated by his snapping at ankles) who is going to put blood, sweat and tears into the cause. The steel is back in our midfield, at long last…

Memphis showed glimpses of his pace and running ability however he may be better served out wide, where he is a natural. Juan Mata, as a natural number 10, would also benefit from the little switch as he is not going to run past people on the wings, unlike Memphis.

You obviously cannot ask for more than a clean sheet on your Premier League debut so Sergio Romero cannot be faulted after recovering from a jittery start, but the current goalkeeping situation is bordering on farcical: summed up by having to thrust Romero into the spotlight with absolutely no minutes of action over pre-season.

The image of the three unused goalkeepers sat in the stand together was peculiar- all three have unresolved futures, the biggest of which has turned into a boring, drawn out saga with a seemingly inevitable end. De Gea’s future should have been resolved either way at the start of the summer.

United’s hardball stance is admirable and understandable- given De Gea is our prized asset- but we are in danger of caving in (without anything in exchange) and frantically searching for a replacement- given Lindegaard has long been  surplus to requirements and Valdes’ position remaining untenable.

The whole situation is bizarre though: The players trained pretty much all week with the plan to start De Gea against Spurs, so for him to become unselectable just days before the game, if your head cannot be right for the first game, how can you regain focus after that?

Anyway, onwards and upwards! We have had a good weekend with Arsenal and Chelsea dropping points, onto our second home on Friday night, Villa Park.

It’s great to be back!