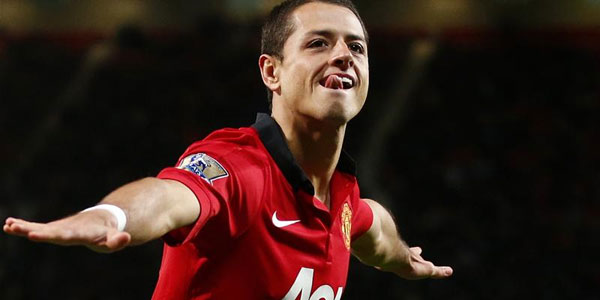 In the last couple of days many top newspapers in England have been reporting about a possible exit for Manchester United striker Javier Hernández.

The Independent has reported that West Ham United are ready to table a £12 million bid for the Mexican who spent the entirety of last season at Real Madrid where his performances were inconsistent.

A report on MLSsoccer.com in July suggested a potential move to MLS outfit, Orlando City, but is it about time Javier Hernandez seized his opportunities in Manchester?

Louis van Gaal has stated his desire to see the striker stay at United and with the departures of Robin van Persie and an ineffective Radamel Falcao, it would very wise for Van Gaal to give Hernandez one more chance.

With the attacking three of Memphis Depay, Wayne Rooney and likely Pedro, who has been promised a role in the starting eleven by van Gaal, as reported by the Metro, Manchester United will most likely be playing a 4-3-3 with one striker.

It is highly unlikely that Wayne Rooney will be playing more than 45 matches and remaining fully fit. Here is when a back-up striker proves to be quite necessary.

At the moment, there are three “pure” strikers in the first team – Wayne Rooney, Javier Hernandez and James Wilson. James Wilson is still playing for the U-21 squad and has yet to achieve substantial game time with the first team, so having someone like Hernandez, who might not be technically amazing, but fantastic at roaming in the 18-yard area, will prove to be important for United’s aspirations at deep runs.

As seen during pre-season, particularly against San Jose Earthquakes, Depay is capable of dropping to the midfield in order to move the ball forward, something that would suit Hernandez’s style of poaching the 18-yard box. Wayne Rooney tended to track back as well and leave the forward line empty, something that Hernandez would likely less often.

When playing full of confidence, Hernandez performs to the highest caliber. In his first season at United, according to soccerbase.com, Hernandez managed to bag 20 goals across all competitions. That was the same season in which United reached the Champions League final at Wembley against Barcelona and won the Premier League.

Even when he was behind Robin van Persie, Danny Welbeck and Wayne Rooney in the pecking order, Hernandez still bagged 18 goals in 36 appearances across all competitions. Despite not being the number one starter, and mostly coming on the bench, Hernandez has still managed 59 goals in 154 appearances as a Manchester United player.

At first, this statistic may seem to undermine Hernandez’s value as a potential back-up to Wayne Rooney, but one must consider that the majority of those appearances have been off the bench and so the possibility of scoring is much lower than having started the match.

With very few world-class strikers currently available in the transfer market, in addition to van Gaal insisting that Rooney will play as lone striker, it is illogical to consider an exit for Hernandez.