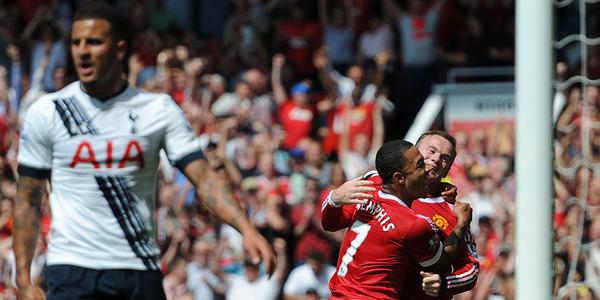 Those of you who follow me on Twitter will know that I was a huge fan of Rafael da Silva. I felt that, given a proper run in the team, he could go on to become United’s right back for the next decade. But unfortunately, both David Moyes and Louis van Gaal didn’t see him as such.

After failing to find a suitable replacement for the Brazilian in the two years prior, United may have found a diamond in Matteo Darmian. An Italian international and not terribly pricey, Darmian looks set to become the solid right back that United have been missing for nearly ten years.

It’s a position that was made extremely important when Gary Neville occupied it and it has been passed between numerous players since, often playing out of position. But Darmian is a natural and doesn’t look like he will struggle with the defensive side of the role either, something that Rafael often failed to convince fans and pundits on. He performed very competently yesterday, which is all that can be asked of the former Torino man on his debut. His substitution for Antonio Valencia late on drew a standing ovation from the Old Trafford faithful and it’s hard to imagine that it will be his last.

2. Sergio Romero could yet be the answer to our goalkeeping worries

The David De Gea saga is boring. Let’s face it. Even the most ardent fan of the Spaniard must be fed up of the story now and will be wanting rid.

His desire to move to Real Madrid is understandable but it is, in fact, United’s messing around that is making this borefest drag out even further. The pursuit of Sergio Ramos was clearly a pathetic attempt to gain leverage in any possible deal for De Gea and it has only served to make United’s pre-season one full of speculation. De Gea is a goalkeeper whose contract runs out in less than 12 months, so United should be happy to recoup what they paid for him and move on.

Sergio Romero could well be the man to whom we can move on to. The Argentine international looked solid yesterday, despite a case of the jitters early on. He may have been helped by a poor and tired Tottenham side but he showed glimpses of the real quality he possesses, from his command of the defence to his ability to snuff out danger. The saves he made may have been routine but it is not a cliche to say that “they have to be made”. It was rare that De Gea did much more than what Romero showed yesterday and it would be nice for the saga to finally draw to a close this week so that the Argentine knows that he will be number one for the Villa game on Friday.

3. United may challenge for the title purely based on the poor quality of the other ‘top’ teams

Three points really is three points. It often doesn’t matter how you get it and with Chelsea failing to win and Arsenal’s loss to West Ham this afternoon, it is fair to say that United have come out of this weekend looking good.

This United side should have no business challenging for the title without a couple more additions but the rest around them are arguably no better off than the Reds. Chelsea looked unbeatable at times last year due to their defensive work, but they would often show signs of vulnerability. It was very rare that they suffered injuries to key players and United looked extremely good against them at Stamford Bridge at the backend of last season.

Jose Mourinho’s knack at winning the big games really did see Chelsea through in their title run-in and it may well do again. Arsenal have improved over the years but after a terrible start, it could be argued that they have already showed signs that any talk of this finally being their year is utterly bogus. City are yet to play this weekend but have improved and remain a high quality side despite an over-reliance on Sergio Aguero’s talents, whilst Liverpool are not sufficient enough a threat to the status quo just yet.

United really do look like they may well stumble upon a title challenge providing they can keep key players fit at key times and win the games they should be expected to win. The three points from yesterday’s game could go a long way towards United’s challenge this season.

4. Chris Smalling has somehow become the lynchpin of the United defence

As Smalling was ordered from the field at the Etihad last October it was unthinkable that at the start of next season he would be as close to a guaranteed starter as any player in the United squad. But here we are. Louis van Gaal’s failure to land a centre back so far this summer has meant that the club are stuck with a decent choice of defenders, but also an injury prone choice of defenders.

Phil Jones and Jonny Evans are very good players when fit but seeing either in a United shirt for a prolonged period is a rare sight. Smalling is the one who has often proved his fitness time and again as he enters his fifth season at the club. The Englishman really did lead the backline yesterday and looked very assured when called upon to deal with danger. Given his performances at the backend of last season and yesterday’s solid display, it’ll be sooner rather than later that he will find himself in possession of the captain’s armband for a match or two.

It was a sight to behold. On the hour mark, a German World Cup winner made his debut for Manchester United. Given the club’s pursuit of Schweinsteiger can be dated back five or six years, it is fair to say that the fans’ standing ovation for him was not just one of admiration and excitement but one of relief.

Much like the signing of Edwin van der Sar ten years ago, his signing has a little of the ‘too late for that’ about it. But the Dutchman managed to still help United to glory for the next six years and you get the feeling that the former Bayern Munich man could have a similar impact. Within nine minutes he was in the book. This is to be expected from a midfielder who will hustle and bustle for the ball in the middle of the park, something he showed signs of in his half hour cameo in the sun yesterday afternoon. It is not often since Roy Keane left but it is finally good to see a mobile, ball winning footballer in United’s spine and we, as fans, should be grateful to have a player willing to put his body (and disciplinary record) on the line in the name of Manchester United. Oh football, how I missed you.